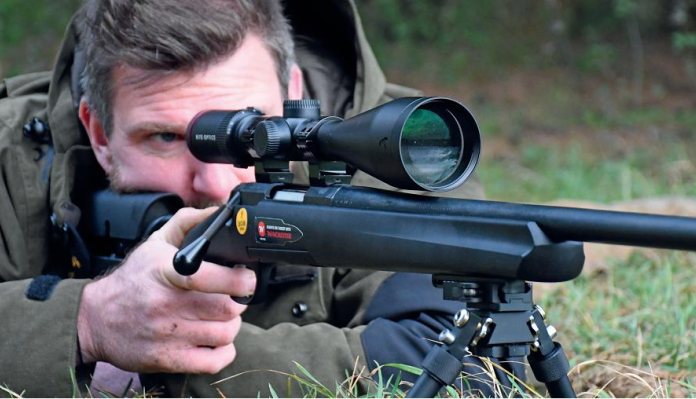 I’m a fan of the X-Bolt action and often feel it is overlooked in the UK. The action is fundamentally well thought out, slick in operation and as seen here, applied to a medium-heavy barrel and chambered in .308. The rifle is also available in .223, .243, 6.5 Creedmoor and .30-06. However, I feel the larger .30 cal brothers go beyond the Varmint ethos, even if they do best showcase the excellent recoil handling characteristics of the ambidextrous polymer stock.

The 610mm barrel sports an 18x1mm thread and shows a 19mm muzzle diameter, swelling straight back to the reinforce, sandwiching the recoil lug to the front of the action. This shows flat faceted walls with radiused top and four threads inlet on each bridge for the ‘X’ shaped scope mount layout, spanning the 65mm ejection port. Weaver bases are supplied as standard, although mine was fitted with Talley rings and a Kite scope pre-mounted.

Overall bolt travel is 95mm, appropriate to standard cartridge sizes like the .308 and Creedmoor. The 3-lug bolt provides a 60° lift to cock the action. The bolt’s 18mm shaft shows a bright polished finish, running within the action, with a left side anti-rotation raceway for the external bolt release catch. A polymer stud on the bolt seems to be the secret to slick bolt travel, one of the best in the industry, and this is especially noticeable with a long 76mm bolt handle fitted that still can’t jam the bolt, even with deliberately aggressive operation. A 22mm teardrop handle offers fast and tactile bolt dynamics. Notably, the plunger ejector and right-side extractor claw worked perfectly on all occasions regardless of operation speed.

An ambidextrous tang safety pushes forward for FIRE and rear for SAFE with bolt and trigger locked. There is a button at the base of the bolt handle to allow for safe opening and although fully functional, make sure you remove your digit as it can get squashed between that and the scope.

The single-stage trigger has a broad matt silver blade and the adjustment screws are thread locked in place, so I think it’s safe to say Browning don’t consider it user adjustable. It breaks crisply at 43 oz with minimal overtravel.

With all the standard features out of the way, it is the injection moulded polymer ‘Max Varmint’ stock where the changes really occur. It free-floats the barrel and there is extensive webbing for structural rigidity guarding against intermittent barrel contact.

There is an aluminium Picatinny rail at the forend’s tip and stippling is moulded into the stock’s surface, with delicate finger grooves that reduce any overtly bulky looks from the stock flowing rearward to the action. Here the sidewalls show a radius at their base flowing toward the flush-fitting magazine with frontal recessed release catch. This slips in and out without hindrance and holds four rounds, centre fed to the bolt face with an arcing motion from the internal rotary sprung follower. Again, reliable and with strong feed lips that should fend off premature wear in the polymer moulding. Radiused upper edges make it easy to direct into the well and its tapering shape makes it difficult to jam. Other manufactures continue with designs that stutter when slid into place or have awkward locking mechanics, that although unlikely to accidentally drop a magazine, also make it an annoying wriggle to clip in place. Here the single front latch is opposed by a leaf spring in the rear of the mag well. The mag needs removing from the gun to fill from the front, but single backup rounds will feed if dropped into the ejection port.

Although easily judged as a heavy varminter, this X-Bolt remains a gun that is well balanced and acceptable for longer carries, making it an ideal choice for the ‘only occasional’ stalker. It’s stable when rested from the crossbar of a high seat, ultra-comfortable prone, yet still reassuring when standing supported or on quad sticks. The adjustable cheekpiece offers comfortable eye alignment without too much width laterally displacing the head either.

The vertical pistol grip features an ambidextrous palm swell. It carries stippling moulded into the front and side surfaces for fingers and the meat of the thumb/palm. It allows a thumb up or wrapped grip and caters for different hand sizes or positions. It shows a generous reach to trigger of 85mm from the throat of the grip. I found it particularly comfortable and is the shape of stock I would choose for long range shooting or varminting.

The 4kg overall weight balances at the recoil lug and I felt comfortable carrying the rifle slung over my shoulder. From quad sticks, the butt hook makes a handy ‘stop’ for the rear support to lodge into for standing shots.

The 23mm diameter knurled adjuster for the comb can be swapped left or right and didn’t seem to need much more than a ‘nip’ to remain positioned and rigid within its underlying aluminium hardware. Bolt removal is possible with the cheek piece in most positions and it’s good to see graduated markings to allow accurate re-positioning if you do take it out.

A 5mm recoil pad spacer was fitted on mine with a 17mm spacer also supplied as standard to increase the length of pull from 13.5” to 14.2”. Grip dimensions and reach to trigger are well balanced. The recoil pad does not snag when mounting the rifle and the grippy face helps to lock it into your shoulder. The compressibility allowed for good tactile perception of pressure and corresponding loading of the gun and bipod. Recoil was modest, especially with a moderator installed. I found the gun pleasant to shoot and a little more dynamic than looks would first convey. I particularly liked the flat underside of the butt with a hooked shape for grip, enabling better recoil control and position versatility of a rear bag. Importantly though, the position allows good elevation control for the nonshooting hand without feeling the need to be reaching too far rearward and compromising elbow position when prone or bench rested.

I used Browning hunting ammunition to run the rifle in and zero it before cleaning and changing over to Winchester 168-grain HPBT match ammo. I found it matched the Browning superbly and I shot cloverleaf 5-round groups at 100m, which is not common on a loaned review rifle. I find it important to use a rifle requiring the least positional disruption when I’m chasing groups on paper and with fingertip cyclical bolt control and no need to exert any great force, the rifle remained well planted on target with only slight disruption from linear recoil impulse. I really hate it when a rifle wants to talk all about how accurate it is but ends up physically difficult to shoot, when something like the X-Bolt, requires just delicate interaction coupled to a crisp trigger.

Four 5-shot groups maintained a mean point of impact and never veered above 0.7 MOA. I was sad to run out of this ammo, as it suited the rifle’s 1 in 12” twist rate so well, I wanted to move to longer ranges on steel.

So, another successful review on a Browning X-Bolt rifle. The very last step was removing the barrelled action to reveal the hidden gem. Browning synthetically beds their rifles, if only minimally, under the front and rear action bridges where the stock screws apply their tension. Every one of Browning’s factory-made, yet hand detailed actions, have shot well and produced more consistent performance in the brief periods which they are with me and I think other makers are missing a trick here.

X-Bolts are undersold rifles with a fantastic action and clear design intelligence when it comes to multi-use compromise. Accurate and with a versatile, if visually deceptive stock, it is an ideal rifle for the occasional hunter who shoots mostly at the range or as a varminter. It could perhaps benefit from a larger magazine capacity on those occasions too.