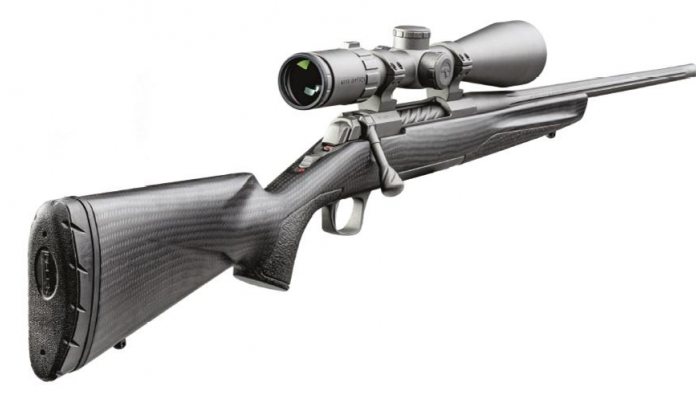 Without doubt, Browning’s X-Bolt is their most successful production sporting, bolt-action rifle to date and, sitting around the £1100 bracket for more standard versions, fills that soughtafter slot of a good quality and firearm that will not break the bank. This model also offers a host of variations and options on a single chassis, 17 by my count; 14 in the SF range from light weight hunters to long range and tactical-type chassis rifles. However, it’s their more recent Pro series that we are looking at here. There are three and on test is the X-Bolt Pro Carbon, Fluted, Cerakote Threaded, which sits next to a similar gun but with Grade 5 timber - the Pro Hunter G5 Threaded and the Grodas Rifle Stocks, Pro Long Range GRS in their Sport/Varmint adjustable furniture.

There’s little doubt that the Pro Carbon is a good-looking rifle and although cosmetics are not what it’s all about; in a world of black and brown rifles it’s undeniably, serious eye candy. The familiar, hunter-style stock shows the long/angled pistol grip, with a slight, right hand palm swell and impressed chequering panels in the usual places and a low/ straight comb line. The forend is a tapered, mid-width build with an angled tip and slim finger boards. QD sling studs are fitted with an Inflex II recoil pad at the rear, which really does tame recoil. I have an X-Bolt Hunter in 270WSM and can attest to the fact that the general furniture and control layout is practical and shootable. And equally important that the Inflex recoil pad system really does soak up some out of the sting of what is a thumpy cartridge.

All this is built around a lightweight, compressed foam core with a carbon fiber wrap and, for the record, it offers a very rigid construction. Which is attested to by a light free-float of the barrel, which even under pressure the forend will not flex out of line and touch. Typical of an X-Bolt, the traditional, full recoil lug is synthetically bedded as standard and it’s not a bad job either! Length of pull (LOP) is 14”, which I found a tad short, but it’s workable.

The receiver is steel and the barrel, a 21”, light/medium, fluted build is threaded 14x1mm as standard with a protector. Both are finished off in an attractive and tough, Cerakote Tungsten paint job, as are the bottom metal (alloy), the 4-shot plastic, rotary magazine and 2-piece Talley mounts, which use their four screws X-Lock bases. As standard, Browning’s X-Bolt’s Feather Trigger is fitted, which is set to a factory-quoted 3.5 lbs; my finger guessed 4lbs, so not too bad. They also say its adjustable up to 5lbs, but the only adjuster I could see is retained by some form of yellow, thread lock compound, I left it alone, as it worked for me, but if you do decide to have a fiddle, I’d recommend you reseal after re-setting. Given the build spec, with its carbon fiber stock and Cerakote finish, I was expecting a bit of a price hike from your more standard synthetic or wood examples.

In comparison to Browning’s previous bolt-action, the A-Bolt, the X-Bolt solves the major problem of the former, which had a weird box mag/hinged floor plate system. It’s a strange mix of thinking and, to be honest, I’m not a fan and I think it’s that alone that has never made the A-Bolt that popular with the UK hunting community. The latter shows a conventional rotary detachable box system with a capacity of 4+1 in standard calibres and 3+1 in Magnums. However, the A-Bolt’s original, tang-mounted safety is retained, as it doesn’t get much better than that for a hunting rifle. Easily operated by the firing hand thumb with little loss of hand position, it pushes forward to FIRE and reverses for SAFE. In this position, the bolt is locked, so Browning incorporated an unlocking button at the base of the lever for safer (safety on) unloading drills.

Most distinct on the Pro series is the new bolt-handle design, which departs from the one-piece twisted and the rectangular sectioned, angled back original. Here, they take a leaf out from their tactical SF MDT HS3 Chassis version, with a round, angled handle and a fluted screw-on tapered knob. My example unscrewed easily, so I’d recommend some threadlock, as you don’t want to lose it in the field.

The action locks by three lugs and gives a low 60⁰ angle, which feels most practical, the bolt body shows spiral fluting and all in the same Cerakote Tungsten paint job. At the rear of the angled shroud is a cocked action indicator tag, which is easily seen and felt. Weighing in at 6lbs 1oz (308 Win version) and at 42” long, the Pro Carbon is a handy and pleasing looking and handling rifle!

Range testing initially gave me mixed feelings, as the rifle did not shoot well with either Winchester load, the Extreme Point was scattering its shots between 3-4.5” and the best I could get out of the Ballistic Silver Tip was 2”. I stopped and gave it a good scrub out and clean, which improved things a bit, the BST was hovering between 1 – 1.5”, and although the Extreme Point tightened up a bit it was still printing between 3 – 4”. Yes, inside the limits BASC lays down for its shooting test for hunters, but not tight enough for me! I then turned to the 170-grain RWS DK and that was shooting an inch, so I’m happy to report the Pro Carbon can do the business. However, and as I always reckon, the trick is to find the ammo or reload your rifle likes and you can get some very impressive results. As always, ballistics were interesting, with results not always panning out as one might expect; see TABLE 1 UPS & DOWNS.

In use, the Pro Carbon proved its handling pedigree. With its overall length of 42” and light weight even scoped up and moderated, it represents a decent modern design. The polymer box mag is easy to fill and feeds reliably and the change is a case of hands finding hands, as the release catch is integral to the front of the magazine body. Equally, bolt operation and feed is 100%, with a smooth and easy stroke in and out. My caveat about the bolt knob proved true and after about 20-rounds it did start to unscrew, OK this is a hunting rifle, but I’d still recommend a drop of Loctite, as you don’t want it to fall. Trigger pull was OK, but on reflection I think I’d dial it down a pound, as there was a tad of hesitation before the break.

Being a 308 Winchester, I was expecting it to be snappy and it was, but that thick and squidgy, Inflex II recoil pad does make a significant difference, even without a moderator up front to shooter comfort. Overall, a nice and modern example of the X-Bolt; however, it doesn’t come cheap, which has to be down to the carbon fiber stock and Cerakote finish. Which and with the competition could mitigate against it.