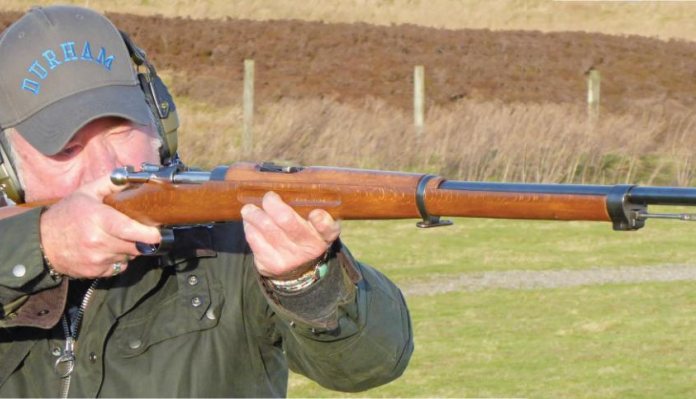 It seems ironic that Sweden and Switzerland, who have little or no history of being involved in major conflicts, should produce what are regarded as two of the better examples of military bolt action rifles. In the case of Switzerland this is the straight-pull Schmidt Rubin K31 and for Sweden, the Model 1896 that we have here, often touted as the Swedish Mauser. This lack of participation in conflicts meant that there was never a need to make ‘wartime shortcuts’ to speed up output, keeping a constantly high quality throughout production. It also means that most of these guns have not seen the heavy use that many military rifles have.

In the late 19th century, Scandinavia was a major customer for the Remington rolling block rifles and Sweden was using a version of this rifle for its armed forces. By the early 1890s trials were underway for a centrefire repeater and a modification of the Mauser model 1893 action was finally adopted using a new 6.5x55mm cartridge. Early examples of the M1894 carbine were produced by Mauser in Germany using steel imported from Sweden. This new steel, containing an alloy of vanadium, nickel and copper, was renowned for its strength and corrosion resistance. In 1896 the M96 infantry version was announced with production again coming from Germany until the Swedish facilities were running at full capacity.

The guns use a revised Mauser bolt, with only two locking lugs rather than three, and like the Enfields, cocked on closing rather than on opening as the Mauser did. The straight bolt handle sits in the horizontal position when closed instead of being turned down like Enfields and later Mausers. While I think this is less attractive, in practice it proved to be just as effortless to use as a turned-down bolt model. Early stocks were made from walnut and during WW1 birch, elm and mahogany were used, with some later examples fabricated from copper beech. The magazine floor plate is flush with the stock making for nice clean lines and ammunition was carried in 5-round stripper clips.

Some 535,000 examples of the M96 were produced before it was replaced by the shorter M1938, following an international trend to reduce the length of standard service rifles. Initial M38’s were cut-down rifles, with the barrels shortened by 5½” but the purpose-built models had a new turned down bolt handle.

At Kranks, this rifle stood out because of its cosmetic appearance. A quick visual check with another M96 on the rack showed that this was indeed another example of the Swedish classic, but with a much better finish to both wood and metal parts. Apart from some rust on the front sight, the rifle looked almost new. There seemed to be no other issues with the metal and the stock had only a few minor bruises. All visible numbers were matching and markings easy to read. The rifle still had its brass disc in the right side of the stock and the bore was very tidy. What a find, I thought! It was then that I was asked if I’d like to review the gun and it was a no brainer.

I began to examine the rifle closer and one or two details pointed to the fact that things may not be all that they seem. The finish on the magazine floor plate was not as good as the rest of the blue. The wood in front of the rear barrel band showed wear from the band being removed, yet there was varnish on top of the wear. The butt plate is stamped with the last three digits of the serial number, and one was a bit faint. Could this be from over-polishing? The more I looked at the gun the more I was convinced that it was a refinish. The final clincher was the proof marking under the muzzle. Had this been proofed over original finish the marks would be white, but these were filled with blue. The job has been well done, but it is a refinish nevertheless. To a serious collector, this would make a massive difference, but from a shooting point of view, if the gun performed well, it would matter little.

The rear sight is a ladder arrangement on a stepped base and in the lower position is graduated from 300-600m (the rifle is zeroed at 300m) while raising the ladder shows increments of 700-2000m.

The first inch or so of the barrel is of a reduced diameter and on to this is fitted a collar and integrated block. A blade is dovetailed into the top of the block and is adjustable laterally. There are several blades of different heights available on the internet. Examples of this rifle will be found with the muzzle threaded and this is to accept the adaptor used for firing blanks. The Swedish blank ammunition contained a wooden bullet which was ‘shredded’ as it passed through the adaptor.

The straight handled bolt appears to have been polished during the refinishing but edges and marks are still sharp. There is a 3-position safety, and when turned fully anti-clockwise (viewed from the rear) is in the “off” position; fully clockwise and the gun is safe and the bolt locked in position; in the vertical position the rifle is still in “safe” mode, but the bolt can be operated, allowing the user to empty the magazine. This central position also allows the bolt to be dismantled when removed from the gun. The vertical face of the cocking piece allowed new recruits to place a piece of leather, or other suitable material, between it and the bolt sleeve so that they could practice dry firing without causing damage. The bolt release catch is on the rear left side of the receiver and is pulled outwards to remove the bolt from the rifle, and when inserting the bolt into an empty magazine, the follower, which acts as a bolt hold-open device after the last round has been fired, needs to be depressed.

The layout is a 2-band arrangement with the rear band having a sling swivel to mate with the one in the stock. The front band has an integral bayonet lug which has a hole drilled laterally and this was sometimes used to pass a cleaning rod through three guns to stack them pyramid fashion in the snow. A bit of research turned up some information on the markings on the disc in the stock. The disc is divided into three sections, the larger of which indicates the bore measurement. Reading left to right on the bottom line from the 6.46 measurement you will see the small triangle above the figure ‘9’. This indicates that the bore was measured at 6.49mm. The smallest section of the ‘pie’ indicates the condition of the bore, and in this case, the mark shows it as condition ‘1’. A new barrel was seen as being perfect, in which case no mark would be made, so this one is less than perfect but still very usable. If the barrel was found to be condition ‘3’ the rifle would be withdrawn from service and the barrel replaced. Of course, there is no telling when in the last hundred years these marks were applied, but a visual inspection of this barrel seems to support the marks.

The North Yorkshire Moors during a gale is probably not the ideal place to try and prove the accuracy capabilities of any rifle, but at least we could test its function, in this case with PPU factory ammunition supplied by Henry Krank. The non-detachable magazine has a five-round capacity and the smooth-as-silk bolt action meant feed was effortless and positive, and empty cases were thrown well clear. The rifle has a rather heavy, two-stage trigger, which is not as good as the Schmidt-Rubin, but something that would require very little work to remedy.

As always with something a bit different, the allocation of ammunition was soon gone. I think I may have to purchase a little more and revisit this rifle on a more suitable day.

For those who like to add a bit of interest to their shooting, there are a number of outlets supplying accessories for these rifles, from bayonets to the blank ammunition attachment. A couple of bits of kit I would probably consider would be the little canvas bag that catches spent brass and the front sight protector, if for no other reason than a bit of range cred.

A final word: If you have an empty slot on your ticket it is always worthwhile checking out the second-hand Guns at your local shop. There are still gems to be found.