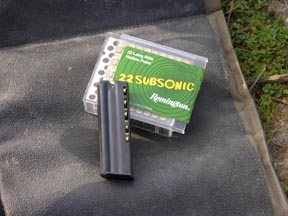 It’s likely that the 22 rimfire rifle in all its diverse makes and mechanism types must be the most prolific long gun in the world, probably even exceeding the Kalashnikov and its variants. In terms of cost you can pay a grand plus for some makes and at the other end of the scale around £100 for something that will get the job done and this is exactly what I am looking at this month…

The CBC/MagTech M7022 is a budget semi-auto in terms of price, but a well presented package none the less. The rifle is pretty much an external copy of the Marlin 7000 but made in Brazil, which is probably one of the reasons why it is so cheap at under £150. CBC used to offer a bolt-action Rimfire and that as I recall was about £50 retail, basic yes, but a great little rifle that would tumble bunnies etc. all day long.

I have to say that I have never been a big fan of semis for field work, considering the reliability offered by a bolt-action far more important than the fast fire ability of a self-loader. But to its credit the 7022 proved more than acceptable in terms of getting the job done. The layout and controls offers few surprises, the receiver is aluminium and shows an integral, ½” dovetail. The light/medium barrel is 18” long with a ramped/protected blade up front and an adjustable, fold-down U-notch at the rear. As standard the muzzle is cut ½” x 20 UNF to take any rimfire moddy and a thread protector is included.

Feed is by a single column, 10-shot magazine, which offers a primitive form of last round hold open, as the platform rises to physically block the bolt going forward. This is backed up by a manual system that allows you to hold the action fully open then push the cocking handle into a recess to do the job. The mag release catch is push-forward lever at the rear of the well and the safety is a cross bolt type at the front of the trigger guard.

The stock is a black synthetic with moulded-in chequering panels on the sides of the forend and pistol grip and the length of pull a generous 14”. The forend is bulbous and offers a hand-filling hold, which tapers forward and finishes off in a semi-Schnable tip. The butt is slim with a low angled comb, which doesn’t do a lot for a natural eye/scope position, also no sling swivels are fitted. Light and apparently handy at 37 ½” back to front, the 7022 was shaping up into something reasonably useful…

If you favour a basic iron sight package then the 7022 needs nothing and is probably good to go as a 40-50 yard bunny bumper, however most of us will want to put on a scope and the other extras. For this I fitted my Deben Endurance 30 3-9x44 IR. Up front went an SM11 moderator, and ammo was Remington sub-sonic hollow point.

Most apparent is the slim, low-combed and angled butt, which is set up for the iron sights, with a scope on top even in medium mounts the head is not raised high enough to offer a natural line-up. This can be sorted by using low mounts, if the objective bell is of small enough diameter, though some form of comb raiser is probably the best bet.

Operation is easy – slap in a full mag and give it a shake to make sure it has locked, then cycle the action to put one up the pipe. The trigger pull is long and mushy but not that heavy, though the release point is a little vague and it took me a few magazines worth of ammo to get an understanding of it… The cross bolt safety is well positioned at the front of the guard to allow the trigger finger to come up and push it right to left to set it to FIRE. Typically it will only work when the action is cocked.

Off a range bag at 50-yards the 7022 was printing around the 1-1/1/4” mark with both the subs and standard velocity ammo. I feel it could have done better with a slightly improved trigger, though I don’t think the slim/low combed butt helped either. Given the price point I don’t think it’s worth investing a lot of money into gunsmithing to improve things here. Easier and reasonably effective would be a trigger shoe and a comb raiser of some description or other.

To its credit the rifle mounts easily and the slotted butt plate locks into the shoulder yet offers a little bit of slide to allow final positioning, so neither too aggressive nor too slippery. Reliability was good with the rifle showing the occasional stoppage common to most rimfire auto-loaders and to be honest you are a bit on the edge with the low powered sub-sonic cartridge anyway. Often it’s best to go up a notch just to get a bit more oomph from the operating cycle. The ersatz last round hold open is a bit annoying, as you have to struggle to pull the empty clip out due to the bolt bearing down on it. Plus, as soon as it’s free, the action snaps shut.

The manual bolt hold open is easy, as you hold the action open all the way to the rear then push in on the cocking handle. To release, take the weight of the bolt and pull out the handle and the action will snap shut, the movement here is probably about 1mm.

Taking the action from the stock shows a more Ruger 10/22-like build underneath with a separate trigger mechanism housing (TMH) pinned on the underside of the receiver. Unlike the Marlin 7000, which uses a frame and cross pin construction, this will make the 7022 far easier to strip down to clean and also work on.

Far from polished in some areas, the 7022 is none the less a capable little rifle for those looking for a cheap and effective working semi-auto rimfire. It would also make a great starter gun for a youngster, or general ‘get to know shooting’ club rifle. Plus with iron sights, scope base and muzzle threading as standard it wants for nothing. But I would say, don’t buy one of these if you are expecting to be able to get better stocks and drop-in go faster bits - if that’s your aim get a Ruger 10/22…