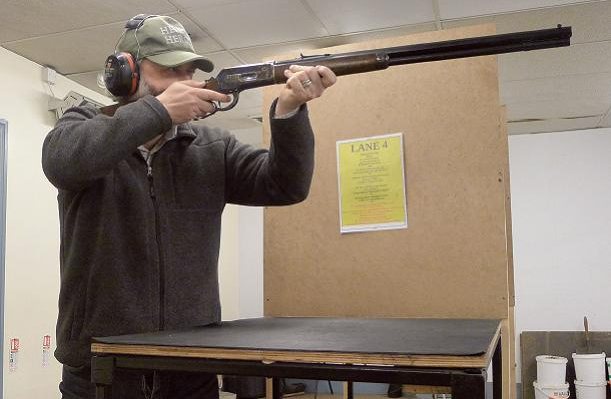 I have been a big fan of lever action rifles ever since the posthandgun ban days when, like most pistol shooters, I switched over to rifle shooting. My first underlever, which I still have today, was a Marlin in .357. It’s fired thousands of rounds and has never failed to function flawlessly and I remain a big fan of the Marlin underlevers over other makes. There has however always been another rifle that has been on my musthave list for all of my shooting life, the Winchester 1886 in 45/70. The sheer size, weight and strength of the rifle makes it one of the most formidable and iconic rifles ever made.

I still have a copy of Winchester’s 1998 catalogue, which shows the rifle in its ‘original’ form; after that date, they made various versions including ‘Extra Light’ and ‘takedown’ versions but to me this is a rifle that needs the 26- inch octagonal barrel and a fulllength magazine. According the Winchester’s website, the 1886 is available once again in its original form, albeit made in Japan.

With the Winchester 1886 being as hard to find as the proverbial rocking horse droppings, other manufacturers, like Marlin, have produced their own 45/70 lever action rifles but they lack the look and feel of the 1886. Pedersoli have their version of the 1886 but to date the only one I have seen has the short magazine and round barrel, similar to the extra light version of Winchester’s own making. More recently, Chiappa firearms have started to manufacture their version of the 1886 rifle and they have come up with the best reproduction of the original Winchesters that I have ever seen. So, with the arrival of my 50th birthday, and with a wife and daughter keen to buy me a present to mark the occasion, I just had to have one!

Although the Italian company Chiappa has been around since 1958, it is a relatively new name in this country. They produce a wide range of firearms, from the historical guns like the 1886, to the modern day semi-automatic weapons. Some of their most innovative guns include a range of revolvers, which fire from the bottom of the cylinder instead of the top, which presumably greatly reduces muzzle rise, and a triple barrelled short-barrelled shotgun with a removable stock. Possession of these types of guns is of course prohibited in this country, but they do show that there is some innovative thinking going on at Chiappa. They produce a range of lever action rifles in the more common calibres, like .357 and 44 Magnum, and Edgar Brothers carry these in stock.

Although the importers, Edgar Brothers, do not currently carry this 1886 model in stock, a quick call to them, and another to McAvoy guns in Standish, had the gun on order and it didn’t take all that long to arrive.

When you open the rather understated box, you can’t help but be impressed with the sheer scale of the rifle, it is a big gun and looks like a true cowboy rifle. The 26-inch octagonal barrel looks hefty and purposeful and the walnut stock looks like it wouldn’t be out of place on a high-end shotgun. Pick the rifle up and the 9-pound weight adds to the feel of quality and strength the gun gives. The wood to metal fit is exceptional and is no doubt the product of technological advances in manufacturing processes, but the gun also retains the feel of something man made and skilfully produced. The stock sports a crescent butt plate in metal rather than the modern recoil pad that other manufacturers seem to favour. They may help soak up some recoil but they don’t add anything to the look of the gun.

Sights consist of a Buckhorn rear sight and a simple, if oddly shaped in profile, front sight. While most lever action rifles seem to sport a brass bead on the foresight, the simple plain post gives a clearer sight picture and avoids the problem of light reflecting off the brass bead and interfering with the sight picture (the bead on the front sight of my Marlin is painted black). Both front and rear sights are set in dovetails and have a retaining screw, which needs to be loosened before adjustments for windage are made. These are a useful addition and help to prevent the sights from shifting due to recoil. The octagonal barrel is blued and the action is colour case hardened, both finishes are of a very high standard.

In common with the original 1886, the Chiappa does not have a separate safety, instead it relies on a half cock of the hammer, which is more than adequate for the purpose. It’s a wellestablished fact that the 1886 was produced to overcome the inherent weaknesses in previous Winchester rifles and offer a gun that could accommodate the bigger calibres like the 45/70; the Chiappa certainly looks and feels very strong. The action was heavy and stiff at first, and I expected this to continue to be the case due to the sheer scale of the action but in fact it soon eased up and now cycles smoothly throughout the long cycling action. There is no play in the action at all, which stands testament to the fine engineering that has gone into this rifle.

The most surprising thing about this rifle has to be the trigger, as it is far better than that on any lever action I have fired. The trigger pull is incredibly clean and smooth, with a break at around 6 pounds. Not the lightest of trigger pulls but this is an historic design and not a modern target rifle.

As factory target ammunition is not generally available, reloading is the only option for the 45/70 round. I initially opted for a 13-grain load of IMR Trail Boss under a 405-grain homecast bullet. This is a load from IMR’s Cowboy Action data, with a published velocity of 1007fps. (On a side note: Trail Boss has now moved over to the Hodgdon brand but Edgar Brothers already have the powder in stock in the new brand, so availability has not been affected).

With a full magazine adding a further pound to the overall weight, the gun still does not feel overly heavy and is very wellbalanced and sits comfortable in the shoulder. Felt recoil is not at all bad, with the gun’s mass soaking most of it up and a surprisingly small amount being felt through the shoulder. The shape of the butt would not easily lend itself to the addition of a recoil pad, but as I stated earlier, they just don’t look right on lever action rifles anyway!

For its first outing, I tested the rifle at an indoor 25-metre range, the chosen load being well inside the safety limits for the range. Loading single rounds is easy via the top ejection port should you wish, but in my opinion, if you have a magazine, use it. The gun consistently put the bullets in a reasonable group, which one would expect at this distance, but more importantly it tested faultlessly and there were no problems with feeding or ejection. So, time to take it to a longer range.

At 50-metres, the group inevitably opened up to around three-and-a-half inches, which I think was down to my eyesight rather than the gun. The sights are clear and the flat top of the front sight makes sighting on target much easier than with a round bead. There is provision on the tang for the fitting of a longer-range sight, should you wish, and Chiappa do make one for this gun. This would almost certainly be needed for shooting at greater distances.

This gun will no doubt shoot well at greater distances and with a tang sight I am sure it will prove accurate at 100-yards and beyond. It is a superbly engineered rifle and the quality and finish is certainly the best I have seen on any lever action rifle, regardless of manufacturer. At over £1200, it is not a cheap gun, but it is certainly a good example of getting what you pay for.

With thanks to Cathryn and Claire for the best birthday present ever!