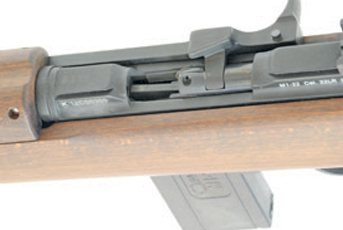 My visit to Chiappa Firearms this year with Neal Parnham (Suffolk Rifle Co) to look at their new 22 rimfire copy of the old US .30 cal, M1 Carbine (M1-22) seemed positive. However, things have changed as there are now three ‘official’ importers of Chiappa into the UK: Western Shooting Supplies, Suffolk Rifle Co and Highland Outdoors (the latter bring it in through Citadel in the USA). Truth seems to be that Chiappa will sell to anyone and make no exclusive deals, which I suppose is just good business sense!

Rifles continue to be imported in small batches by both Western and Suffolk. As of yet we have seen nothing from Highland, though I have heard they should be bringing in a large batch in the near future. So doubtless they will be seen as the major player.

MAKE HAY WHILE THE SUN SHINES

The rifle supplied here came from Suffolk Rifle and to me represents the model that everyone who wants one will buy. It’s the original wood stocked style, though there’s also a black polymer, which I don’t think will do that well. With the popularity of what I call 22 rimfire military look-a-likes I at first thought the M1 would fit right in with the current crop of rifles.

On reflection the M1-22 shows the age of its design when compared to the generic 22 rimfire AR15s, SIG and Anschutz/ISSC guns in terms of controls, handling, sighting and capacity. Where it does score and also its niche is, it’s a very good copy of the original US M1 Carbine. Not 100% accurate but very close! So if you like your classic self-loaders then this might be the one for you!

I have seen these rifles being built and Chiappa make as much use as is possible of alternative materials. For example only the bolt, barrel, butt plate and parts of the trigger mech are steel, the pressure-moulded receiver and operating handle are a zinc alloy called Zamak. Sights, trigger mech housing (TMH), controls, magazine, bayonet bar and barrel band are all polymer mouldings. It looks good from a distance but when you get closer you can see the differences. However, as this gun was copied exactly from an original M1 Carbine most real components will fit!

From the box the M1-22 comes with 2-magazines, as I was told at the factory, though I was also told by Neal that early rifles only came with one. Dimensioned the same as the original .30 Carbine 15-shot box they offer a capacity of 10 – 22 LRs.  Chiappa says by the end of the year a 25-shot banana clip identical to the M2 Carbine’s 30-round mag will be in production. Capacity is going to be the deciding factor, as all the more modern look-a-likes offer a 20+ magazine as standard.

The M1 is simple to operate, on the right is the cocking handle, which reciprocates with the action. This incorporates a manual, hold-open button that pushes down into a detent in the frame. There’s an ersatz last round hold open provided by the rising magazine platform blocking the bolt. Below the cocking hook is the magazine catch, which presses right to left to operate, however mags don’t fall free and have to be pulled clear when empty. Behind this is the safety catch. The 2-position lever runs parallel to the bore to FIRE and flips down vertically for SAFE. It can be applied with the gun in any condition.

Sights consist of a fixed blade in a set of protective ears up front, at the back is a fully adjustable aperture. Windage is by a rotary drum on the right and elevation by a pre-set ramp that the aperture slides on. It’s marked 1, 2, 2.5 and 4, so is a case of suck it and see with 22 rimfire ammo. One major difference is the top of the receiver bridges show ½” dovetails, so easy enough to remove the rear sights and fit a scope.

The wood stock is a faithful copy of the original, though made of beech and stained. The butt is small offering a 13” length of pull (LOP) and there’s a handguard on top retained by a barrel band complete with side-mounted sling swivel. The back of the butt on the left shows an angled slot and on the right a vertical one. The real M1 Carbine used this to secure the sling by means of a small oil bottle that acted as a keeper.

Chiappa do not include one, but Suffolk Rifle has accessed a number of real and reproduction military accessories such as, cleaning kits, oil bottles, slings, drop bag and even the twin magazine pouch that fits over the butt. Also the side-folding airborne stock. In doing so they can offer four models either the basic wood or plastic-stocked guns. Plus the ‘Tribute’, which is the wood stock with sling/oil bottle, ventilated metal handguard, drop bag and double mag pouch and the ‘Airborne’ with folding butt.

As a fan of military self-loaders I was immediately drawn to the M1-22, and pre-1988 owned an Original .30 M1 Carbine. It was never blindingly accurate but it worked out to 200-yards OK and proved its basic premise of a short rifle designed to replace both pistol and sub machine gun for troops that did not need the full power M1 Garand in 30-06 Springfield.

Closer inspection and handling shows up a number of cosmetic and real flaws in the build. The rear sight aperture is retained by a sprung ball bearing that locks into each range detent. However, there’s no stop pin at the top of the slide and it’s all too easy to literally push it and the ball and spring off and lose them. Up front the barrel band is supposed to be held not only by a screw but also a sprung hook engaging with a cut-out, in none of the guns I have looked at does the hook actually engage. The magazine catch can be stiff and the trigger pull is heavy but workable.

The manual hold open is a good example of wrong material in the wrong place. The actual locking plunger that pushes down into the side of the frame is steel, but the action is Zamak, which is considerably softer. It does not take long for the plunger to wear the material away and when this happens it will either not hold open at all, or as I found lock back but the slightest knock will disengage it. The worst case scenario was reloading as when you snap the mag in the disturbance is enough to trip the bolt. On a course of fire this means you could be loading the gun before the RO tells you too, which could get you sent off!

With only a 10-shot capacity Chiappa has not bothered with slotted sides or pull-down lugs for the magazine as it fills easily. I assume the 25-rounder will have them though! The M1 seemed to prefer standard to hi-velocity ammo and could be picky with sub-sonics. After about 250-rounds it showed the occasional failure to fully chamber, which was easily sorted by thumping the cocking handle home. It’s not a fan of live round ejection as this can be intermittent. Here it pulls it out so far then it drops off the extractor claw and has to be pulled clear by fingers! Accuracy with the irons sights was as expected with 1.5-2” at 50-yards, like most 22 semis with a scope on board that will come down a bit to around an inch!

I thought I would fall in love with the M1-22 straight away, due to my interest in military rifles. I like it in some ways but it is in fact a highly specialised design. Consider these points: