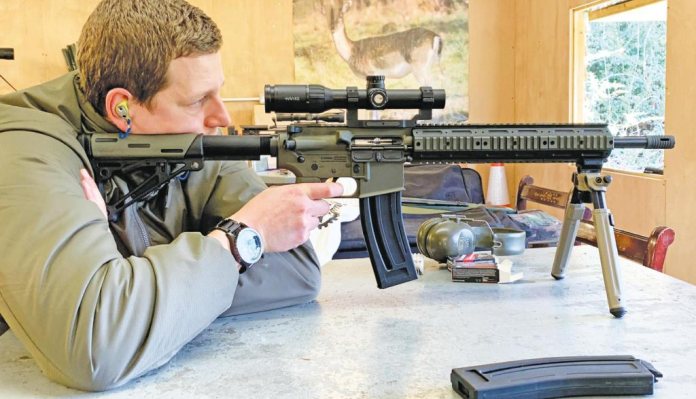 It was 2011 when I first tested the Italian company, Chiappa’s, MFour, 22 Long Rifle AR15 semi-auto. Back then, they were not that well known and also before Edgars picked it up followed by Raytrade today. This was also when the 22 rimfire military look-a-likes started to get popular, with the AR-types being the most sought after of the reproductions.

I was keen to try one and what came was a little different from what I expected, due, as I discovered, to some Italian laws regarding what you could and couldn’t have on a rifle of this type. The basic layout was of the US M4 carbine with a flat-topped receiver, detachable carry handle rear sight (D-handle) and classic M16, A-frame front sight, round handguard and telescopic stock. The pistol grip is a copy of the Hogue, rubber, overmoulded design with finger grooves. Chiappa make maximum use of polymers, with both upper and lower receiver sections being of that material, as is the butt and magazine. This is not unusual, as Smith & Wesson, with their M&P15/22, also goes for this build-style.

Control-wise, it’s all there, but nothing works apart from the safety catch, ejection port cover and mag release, which is typical of some of the 22 ARs. There’s a case deflector, and the forward assist and bolt release are redundant, nor did the telescopic butt retract, as it’s a single moulding. Closer inspection of the flash hider shows it to be solid (non-slotted) and not screwed on but retained by a set screw.

The rifle came with 2 x 28-round magazines and iron sights and the flat-topped upper receiver offered the option of fitting a scope and, at around £550 back then, it seemed like a bargain and it worked well enough. However, and even in a country hungry for this sort of equipment, it never made much of a splash in the UK. I can see why, as areas like the fixed, dummy flash hider and non-adjustable butt did it no favours; plus, it was not that well presented. I always saw it as a 22 AR15 for those that just wanted something cheap and cheerful for a bit of fun.

When RayTrade UK appeared a few years ago, taking on Remington and Marlin, they later picked up Chiappa, who, as a manufacturer, has a big portfolio that included their modern Rhino double-action revolvers, classic reproductions like Sharps BPCRs, lever-actions and a wide range of 22 rimfire rifles and pistols. Amongst this, was in improved version of the original MFour-22, the Gen III in two versions; the original carbine and the newer Pro Rifle, which is on test. They also offer rimfire uppers that can fit to a standard, 223 lower assembly.

In essence, ‘the song remains the same’, as the Pro uses the standard polymer upper and lower assemblies of the original, although is pleasingly in olive drab (O/D) colour, with black accents on the safety catch, T-handle, mag release button and ejection port cover. However, there are a number of notable changes that address both cosmetics and also build spec. Gone is the one-piece, moulded and fixed-length buffer tube and butt, to be replaced with a real tube that wears a fully functional, Hogue, Commercial, Collapsible, Buttstock with O/D butt pad and comb sections. So, you can adjust the length of pull (LOP) to suit. Complimenting this and unchanged from the original, apart from the colour, is their AR-15/M-16 Rubber Grip with Finger Grooves in Ghillie Green.

Moving forward, we see a wide, freefloat, 4-way, Picatinny forend tube in black anodised aluminium; it’s not ventilated, although scallops have been machined out to make it look like it is. At 12, 3, 6 and 9 O’clock are O/D Picatinny sections for mounting grips, lights and lasers. The general black and green, 2-tone finish gives the Pro Rifle a much more up-market look and feel. Add in the functioning telescopic butt and decent pistol grip and it offers a deal of visual and familiar curb appeal, as well as practicality. The 16” barrel shows a heavier profile too and is finished off with a slotted muzzle brake. Once again, offering familiar and accepted features for any self-respecting shooter considering buying a 22 AR. Unlike the standard Gen III M4, no irons sights are included on the Pro, but can be fitted.

The lack there of

Now, we come to the action; like a number of 22 ARs, both commercial and custom built, the MFour (either model) does not have fully functioning controls. For me, that’s a bit of an issue, I’m not too bothered about forward assist and ejection port covers, but genuine, automatic last round hold open and manual bolt release is to be preferred, one of the reasons that I opted for a Smith & Wesson M&P 15/22. However, it does offer its own version of the former function, which, in truth, is good enough, as we shall see.

The safety is positioned on the left above the pistol grip and, as usual, rotates to 12 O’clock for FIRE and 9 for SAFE. Chiappa have fitted a dummy bolt release catch for the look of the thing no doubt. On the left of the lower, by the mag well is the standard magazine release catch, with the mags falling free when pressed. Above this is the sprung, ejection port cover and to the rear a case deflector, which can be useful for lefties. There’s also a forward assist, which can be pumped like the real thing, but it makes no contact with the bolt, so don’t be fooled into thinking it does. Charging the rifle is done with a standard, rear-mounted T-handle, as with all ARs.

Thankfully, the Pro strips in the usual AR manner, pushing out the rear body pin allows the upper to hinge open, where you can draw out the bolt assembly. Pushing out the forward one too allows it to completely come off. Chiappa use a copy of the standard, rimfire insert, which is easily stripped without tools for cleaning. Feed is from a 28-round magazine, with an external follower lug that pulls down, so aids filling. As I said, there is an ersatz, last round hold open, identical to what Black Dog use on their 22 AR mags. After the last shot, the bolt recoils and moves forward only to be intercepted by the rising platform, so blocking the action. However, when the mag is removed, the bolt goes forward; so, if you were shooting in company or competition, you’d need a chamber flag to show the rifle was clear. General feel and handling of the Pro is not bad and it’s more modern and sporting look is going to appeal across the board better.

Raytrade UK kindly supplied two lots of Remington ammo; 22 SUBSONIC Hollow Point and 22 THUNDERRBOLT High Velocity. As I recall, I’d had problems with subs on the original test in 2011, so wondered if the Gen II name would include improved functionality? I added a Hawke Frontier 30, 1-6x24 with Tactical Dot reticle in a QD mount, a neat and versatile compact well suited to this sort of rifle. Up front on the rail went a Magpul bipod, which again seems to suit AR-type rifles.

Shooting for group was done off the bench, supported at 50 and 100m, neither load proved particularly fussy and, with a few, unavoidable, ammo-related stoppages, the rifle ran reliably. Initial accuracy and consistency was quite spotty, unusual on a rimfire, as in my experience, they tend to shoot how they shoot from the off. Groups at 50m ran to 1.5”+ and 2-4” at 100m, but I persevered and, after about 150-rounds, the Gen III seemed to hit its stride. At 50m, they settled down to sub-MOA and at 100 averaged 2 MOA. Not amazing but comparable with other rifles in its class and for the sort of use it will mainly get, probably at club level, very acceptable.

There’s a deal of snobbishness with 22 ARs and you can pay a lot of money. These days a Smith & Wesson 15/22 will cost the thick end of £700 and Tippmann’s Classic and Elite will set you back around £899 and £999 accordingly. All excellent choices if you want the nearest thing to the real deal in terms of operation at reasonable money. Semi-custom guns will easily spiral into the £1500-£2000 mark and, at the end of the day, they all do a similar job; so, it’s down to you to know what you want and are prepared to pay for. This, to me, is where the MFour slots in, as it looks like a modern 22 AR and the two-tone finish is a nice feature. Plus, you get two magazines, for what seems ot be a price less than the original. And, if it goes bang reliably, which it does, then it’s going to have a large appeal for those looking for something that won’t break the bank.