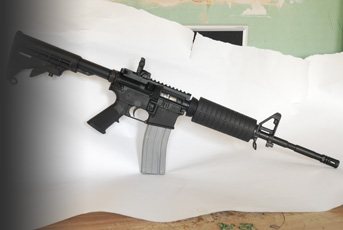 For me CMMG has been a bit of a trial. I first heard about them early last year as makers of what some said were the best 22 semi-auto AR15s, but it was not until May 2011 I went hands on. Plus there was confusion over UK distribution, which got rather convoluted! After much talk there appears to be at least three potential importers, one of which supplied the test rifle. Though I am told by another they have a big order of guns coming in soon.
I was really looking forward to testing the CMMG and in my mind had built it up to some sort of super rifle, maybe a bit too much! As they have a proper automatic last round hold open and manual bolt release plus a working forward-assist, which is rare, if not unique on a rimfire. What arrived was their Mk-4 MULTI Carbine; essentially an M4-type; Rock River Arms type telescopic butt, A2 pistol grip oval/synthetic forend, 16” military-type barrel with flash hider and fixed, A-frame front sight.

The build does not appear to be mil-spec and I did not like the plastic buffer tube and the material and mouldings of the pistol grip and butt are not as sharp as on other ARs. The receiver halves look to be cast alloy with a semi-matt finish. The build shows a flat topped receiver and comes with a Magpul MBUS, fold-down rear sight. Operation is by a rear-mounted, synthetic T-handle as normal. Trigger pull is standard military with a firm but workable two-stage pull that trips at around 5-6 lbs.

Unusual on CMMGs is the large, plastic case deflector that partially covers the ejection port. Here its spring-loaded cover is 25% shorter than the norm. This is much like the old 9mm AR15 SMGs and does look a bit ugly, though it works, so is well suited for south paws! Of particular interest is the bolt group, which is the usual, pull-out, pre-packaged, nickled or stainless unit and a working forward-assist. This consists of a plastic block with vertical slots that sits behind the bolt and pumping the plunger in the side of the receiver allows you to close the action if it doesn’t fully shut.

I am told the rifle shows all the features available from CMMG. One of which is the working, M16-type automatic bolt hold open and manual release facilities, which and along with the S&W M&P 15-22 sets it apart from others in this class. Opening up the action shows a removable, rectangular adaptor that sits on top of the mag well inside the lower receiver. At the rear is a lever that trips the integral bolt holding catch via the magazine platform as it rises.
Feed is from a 25-shot magazine, which is made of grey plastic, doubtless to look like the old, aluminium Colt M16-types. It does not show external pull down lugs like the S&W does, so filling is harder and they need some running in to get to capacity. I have experienced this with Black Dog too, which is something you live with, but it does get better. Annoying was the first time I slid it into the well it jammed before it reached the locked position. This was traced to two, moulded lugs either side of the rear of the mag. Apparently they can be adjusted (filed) to give a firmer engagement. Fair one, but there is no mention of this in the handbook and if you did not know then you would assume the rifle was unshootable…

Though this may sound a little ingenerous; but the build, finish and feel of the Mk-4 did not do a lot for me. Nor did I like the MBUS rear sight, OK it’s a practical, fold-down design, but on an M4 I would have preferred the detachable D-handle (carry handle/sight unit) or similar. Big deal you might think, but curb appeal, especially with this group of equipment, is an important factor. However, the two aspects that really intrigued me where the hold open and forward-assist, as I considered them potentially useful.

Like I said the magazine was hard to fill and initially I was only able to get 12-rounds in, which slowly improved as the test continued. The bolt hold open facility was interesting, initially it did not work and would leave the last round in the chamber with the hammer uncocked. It kicked in after about 50/60-rounds, but proved a little ammunition sensitive, with best results from Winchester’s 40-grain sub-sonics and Lapua 40-grain Magazine 22 standards. Though it did not like MagTech 36.9-grain HVs so well. This is not uncommon with any semi-auto rimfire, as bullet weight seems to affect cyclic reliability far more than action speed alone. But the more I shot it the better and more consistent it became with all ammo-types used!

It is also possible to run the gun on Black Dog magazines, which offer a more basic bolt hold-open facility as the extended magazine platforms blocks it going forward after the last round. All you do is remove the drop-in CMMG device. In this mode the rifle proved its reliability as it ran on all ammo-types I used from subs to HVs easily. Accuracy, unsurprisingly was good even with the iron sights, so no worries on that score.I would caution you not to run the rifle without the hold open device using the CMMG magazine as there’s a small lug at the rear of the platform that actuates the system. This will block the bolt after the last round, but I feel continuous use could put too much stress on it and it might break off!

I have always considered the forward-assist on the 223 Remington AR15 to be of little use, as if you have to try and manually shut the bolt you are probably jammed anyway. Alternately with a 22 AR it seemed like a good idea, but on reflection and though it works I’m no longer so sure. If you get a short bolt (failure to close), the chances are the rifle is gummed up and needs cleaning.  To its credit the rifle only jammed once with an ejected case getting caught up and crushed inside the T-handle by the closing bolt, which can and does happen. My test was briefer than I liked, as I was on a clock to get the gun back to the importer. But I put around 400-rounds through it and in terms of cycling it proved pretty reliable, with just the one major stuff up, which happens on all semis and is near unavoidable. To be frank I found the CMMG a little disappointing; the build and finish was not quite as slick as I had been lead to believe and previously held views on certain features did not perhaps match up to reality. The last round hold open, which is great when it works and does speed up reloading drills is not 100% reliable. Plus its potential to affect cycling makes me question its true value and I would go instead with the more basic Black Dog magazine system. The forward assist works, though in 400-rounds I never needed to use it.

Given the gun is reliable and accurate, which I think it is; it all boils down to curb appeal and value for money. North West Custom Parts who supplied this example told me they took the CMMGs to the Phoenix Meeting and general feedback from customers was lupe warm. The main criticisms being the low quality plastic buffer tube and furniture and average feel, fit and finish. However, this was purely based on looks and handling and not shooting performance, which I found to be acceptable. In terms of what it offers it’s competing against the Smith & Wesson 15-22, SIG522 and Spike’s Tactical ST22.

• A little disappointing on fit, finish and presentation