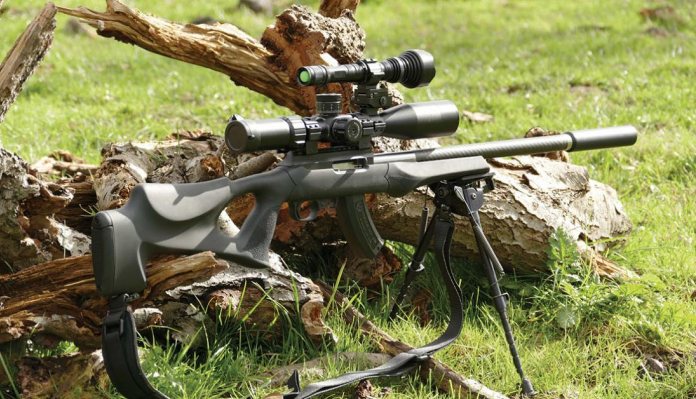 Born and raised on bolt action rifles, my knee jerk reaction to any semi-auto was to dismiss them as inaccurate, perhaps a bit unsportsmanlike, maybe with a touch of ‘boy racer-ish’ thrown in for good measure.

The seemingly innumerable number of Heckler & Koch ‘black gun’ style semis out there didn’t do much for my enthusiasm either. I’ve nothing against them but I couldn’t really see myself trudging across a field with what looks like an assault rifle over my shoulder. I had visions of armed response turning up- “Ello, ello, what’s going on here then?”. “Nothing officer, just doing a spot of rabbiting”. “Oh really” says the officer, “I’m not a nutter honestly!” says I… You get the picture, it all seemed a bit ‘weekend warrior’ and yet the semi-auto itch still refused to be scratched.

After months of umming and arhhing, and some clandestine Googling, the solution revealed itself. The good old Ruger 10/22, an American classic that’s been in production for over 50 years! Perfect. Well almost…

Out of the box, a bog-standard 10/22 can be pretty good but to achieve the kind of accuracy many UK shooters demand, upgrades are pretty much essential. Here’s where it can get expensive, not to mention time-consuming.

The 10/22 is one of the most customisable rifles on the planet. You can start with a standard 10/22, and if you go the whole-hog with upgrades and options, the only original part would be the receiver. Kidd Innovations, Valquartsen, Boyd, Green Mountain, the list of third party suppliers and replacement parts is endless.

You can start with a £450/500 stock rifle and potentially end-up spending another £2000 on upgrades. £2500 for a 22LR, semi-auto or otherwise, that’s too rich for my blood and if you intend to do all your own upgrades there’s also the issue of availability.

Brownells are often the first port of call in the UK for custom 10/22 parts, aside from the cost, brace yourself for a bit of a wait. On average the few extras I’ve bought generally take about threeweeks to arrive from the US.

Ok, so what’s the solution? It’s simple really. Rimfire Magic (AKA - South Yorkshire Shooting Supplies) founded back in 1985 by Roger & Sheila Francis. If you visit their website, you’ll find all manner of upgrades for both rimfire and centrefire rifles but the jewel in the crown for any would-be 10/22 owner is their ‘10/22 Build List’. Essentially, it’s a ‘pick ‘n’ mix’ for building a custom 10/22. You simply select the parts you’d like and Roger puts it all together and tests it out. All you have to do is pop down and pick it up. Marvellous!

The system is all based around the Rimfire Magic receiver, which is machined in the UK but looks very similar to the custom Volquartsen offering. All the core tweaks and add-ons are included, such as a tuned bolt and automatic bolt release, an in-built Picatinny rail, extended mag release, a tuned extractor, a soft recoil buffer and last but not least, Ruger’s superb BX trigger unit. They even throw in a 10 shot magazine.

Older 10/22s we infamous for their rather agricultural triggers, weighing in sometimes at 7/8lbs. The new polymer BX trigger unit breaks around 3lbs and when combined with a custom barrel, the 10/22’s accuracy is transformed, delivering bolt action performance from this brilliant little rifle.

There are six barrel options in total, all threaded, two standard Ruger offerings (short/long) but the real choice is between Volquartsen and Green Mountain. The Volquartsens come in two lengths – 12.5-inches and 16-inches. Both variants are standard diameter barrels, which have been carbon wrapped to bull barrel proportions (.920) for greater stiffness and a much-reduced weight.

As you can probably tell, I opted for the 16-inches to provide slightly higher muzzle velocity (100fps roughly) and hopefully a bit more accuracy further down range. If you shoot from a vehicle, the 12.5-inches will nevertheless have a lot of appeal, I rarely do and I preferred the balance, performance and proportions of the longer barrel.

The second option is either the Rimfire Magic heavy or tapered barrel (16-inches) from Green Mountain. Both are very accurate according to Roger but the heavy barrel is extremely heavy, especially compared to the Volquartsens. Great for bench rest shooting but heavy-going in the field.

Assuming you’ve picked a barrel, the final job is to select a stock. There’s actually six variants in the list, some with multiple colour options but I actually picked a newly arrived Hogue over-moulded thumbhole stock I’d spotted in the ‘New Firearms’ section.

A quick call the Sheila explaining exactly what I was after and job done! I popped down a week later and my new custom 10/22 was waiting for me. So, don’t be afraid to explore the site, there’s also a ‘Custom Power’ page where you can find even more add-ons and upgrades. Don’t be put off by the website, Rogers’ expertise is in rifles, he certainly isn’t a web designer that’s for sure.

My biggest concern before buying my 10/22 was accuracy. Semi-autos are great fun; they offer a different shooting experience but I knew that if it wasn’t accurate it would be heading for the second-hand market pretty quickly. I’ve had the rifle about a year and I have absolutely no plans to sell it!

In terms of accuracy, it’s pretty damn close to my bolt action 22LR, which has already been tweaked fairly heavily. We’re talking millimetres not centimetres. Having instant follow-up shots makes it a great night time bunny gun. Instead of one in the bag, you could easily be looking at two or three in certain situations.

As for ammo, you do need to experiment a bit. Some subsonic ammo can struggle to cycle the bolt but the majority are fine. High velocity ammo has no problems but I generally stick to CCI hollow point subs, or CCI Segmented, which it loves. I also get excellent results with SK Standard Plus. The only ammo you need to avoid is CCI Stingers, as their overly long casings can cause problems.

In terms of handling, it’s great. The Hogue stock, although a bit flashy is incredibly comfortable. The raised cheekpiece and ergonomic design of the forend make it a pleasure to point and shoot. I’ve had few, if any, feeding or ejection problems with right ammo. In terms of accuracy, it’s about 1 moa prone or bench rested, which is pretty impressive for a semi. It’s also surprisingly quiet, I have a bogstandard ‘Atec’ moderator and it’s virtually silent shooting subs. In fact, the ‘clack’ of the bolt is louder than the round. Even that is barely noticeable and certainly doesn’t seem to disturb the bunnies, even at close range.

In my opinion, Rimfire Magic provide the perfect solution to the complex problem of building a truly custom 10/22. In short, quality components, great service, great people and most importantly, a great rifle at a sensible price.