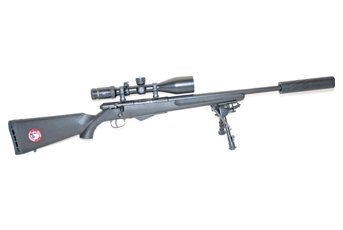 The much hyped 17 Hornet calibre as designed by Hornady arrived in the UK last year. In truth a clever but very specialised cartridge, but it gave us something that sits between the rimfire 17 HMR and 222/223 Remington. Where the HMR can kill small game out to an effective ceiling of 200 yards in the right hands and on a good day, the Hornet increased that to 300 and improved performance by around 30% in a choice of 20 and 25-grain bullets. All this from a case based on the 22 Hornet and necked down to .17”.

The original launch platform was Savage’s M25 a sort of hybrid rimfire/centrefire chassis, which came in two options the Walking Varminter a truly horrible synthetic-stocked design with a 22” barrel and the Lightweight Varminters with 24” tubes and good laminate stock in standard and thumbhole options. I got the former and reckon it’s one of the ugliest and unhandy rifles I have ever used. Bolt lift was too heavy and feed was not good and it seemed to me I was always fighting with the rifle, however, it shot well beyond its looks.

Using Hornady’s 20-grain V-MAX ammo it was running through the 22” tube at 3598 fps/581 ft/lbs, and capable of ½” and better performance. Factory figures quoted 2650 fps and I reckon that just 52 fps less is pretty good. I shot a lot of squirrels and rabbits with that rifle and it was near surgical in the way it performed and though it smoothed up a little it was still a misbegotten thing and I had no love for it.

Logically other companies would be chambering up for the 17 Hornet with Ruger offering their M77 rimfire/small centrefire chassis and CZ their 527 as both already offer 22 Hornet on these platforms. I know both guns very well but the Czechs beat the Yanks to the post to get a rifle across my desk.

They say there is many a good tune played on an old fiddle and certain makes still stand out as mile stones in design. Such an item is the CZ 527 with its mini Mauser 98 action! It’s hardly a hi-tech miracle, but a solid and proven piece of design and much preferable to Savages M25!

I was sent the Varmint with a medium/heavy, 24” barrel and walnut stock which is just a tad beefier than the standard 527. The rifle is well presented with decent bluing and precise, laser-cut chequering, QD sling studs and a rubber recoil pad.

The all-steel action has the classic, Mauser twin lug bolt with large, sprung external extractor and a straight, angled out bolt handle. Feed is from a detachable 5-shot magazine with the release catch on the right of the lower well. The trigger is a single set (push forward) unit that breaks at a sweet 3 lbs that can be reduced to about 2 lbs when set. The most annoying aspect of the design is the safety catch! Located rear/right of the action its lever is pushed forward for SAFE and pulls back to FIRE, which feels back to front. The receiver bridges show integral, 15mm dovetails and mounts are available from Millets, CZ/Kozap, Third Eye Tactical, Leupold and Sportsmatch. Such is the popularity of this model. It’s not that pretty I would agree but it has an old world charm that gets to you and it works!

I had burned off all my 17 Hornet ammo in the M25 test and on speaking to Jason Hornady was told that new supplies would be forthcoming as they were looking at different component suppliers, but due to the popularity of the calibre in the US I might have to wait a little. No problem I knew how the factory fodder shot so this time around would concentrate on reloading for it. As it turned out I found a dozen rounds of 20-grain V-MAX left that I could at least see if the CZ’s extra 2” of barrel made any difference. This last proved quite interesting.

People often bad mouth CZ rifles saying they are cheap and not of the quality of more modern makes. Yes they can be a bit clunky from the box and take a bit of running in. This latest 527 turned that on its head as it was as smooth as silk! However, two things caught my eye, 1 - the barrel channel, which offers a reasonably generous free-float, had not been cut parallel to the barrel so touched on the left side at the front. 2 – after each shot the magazine would slide down. Both easily sorted but a bit annoying!

Edgars supplied a bipod and Weaver Kaspar 3-12x50 scope along with a Hardy Gen 4, 17 Hornet-dedicated reflex moddy, which are imported by Riflecraft Ltd. For pure accuracy testing I fitted a Nikko Stirling 6-24x56 Night Eater in high Sportsmatch mounts as I wanted some serious mag to determine group sizes. I already had 17 Hornet dies and 20 and 25-grain V-MAX bullets from Hornady along with data for Hodgdon Lil Gun powder. Plus all the once-fired cases from my first gun test. But first the factory fodder.

The 20-grain V-MAX shot sub ½” through the M25’s 22” barrel giving an average of 3598 fps/581 ft/lbs. In the CZ it was slower at 3525 fps/558 ft/lbs and cutting near ½” at 100 yards far from inaccurate but a definite difference. I would have thought the longer barrel would have got more out of it. It could be that manufacturers dimension might be slightly different hence the change in figures.

Hodgdon indicated Lil’ Gun was the best powder though they do list others. Hornady supplied the data -  the 20-grain pill could be run at a maximum of 10-grains with a standard small rifle primer, I used the new Fiocchi from Edgars and the 25-grainer at 8.9-grains, both at a cartridge overall length of 1.715”.

Barrel length aside this draws me to two conclusions, there could be a bore size difference between the 527 and M25, be it the rifling lands and grooves or simply the diameter. Secondly it might be that the factory loads are being held to a speed and given the small powder charge and perhaps a little like a 22 rimfire all powder is consumed by a certain length and no further advantage is gained by the longer barrel. But with the reload, which is demonstrably faster it perhaps exceeds this limit.

These reloads in the CZ also swapped on accuracy with the 25s going sub-1/2” and the 20’s shooting a bit looser. Both respectable but again a definite difference in group size. Of course other areas like case/chamber dimensions etc., also come into play and these figures were achieved with once-fired brass re-sized through the Hornady dies.

As I said the rifle cycled smoothly and all controls worked easily. I did have one stuff up of my own making. I got onto two hares at 225-yards dropped the first one with a head shot and cycled the action and the gun jammed solid. I had somehow managed to load the second cartridges’ rim behind the third causing the problem. Too long perhaps being used to rimless cases in centrefires, but as ever it taught me to fill the mags with a bit more care.

WOULD I, WOULDN’T I?

Without doubt the CZ 527 Varmint is a superior rifle to the Savage M25 Walking Varminter and probably the Lightweight versions too. With reloads that extra 2” of barrel certainly seems to make a difference. I would pick the 20-grain reload for general work, as its ability to go 3800 fps + with a mere 10-grains of powder is bloody good. If you do your part accuracy is impressive with a 200-yard zero drop at 300 is minimal and I found it the ideal squirrel gun!

However, I have yet to kill a fox with the 17 Hornet and I would use the 25-grain load as it gives more energy but still keep distances sensible, as I’m not totally convinced unless it’s a head shot. In this it’s much like a 17HMR though with more range and general potential!