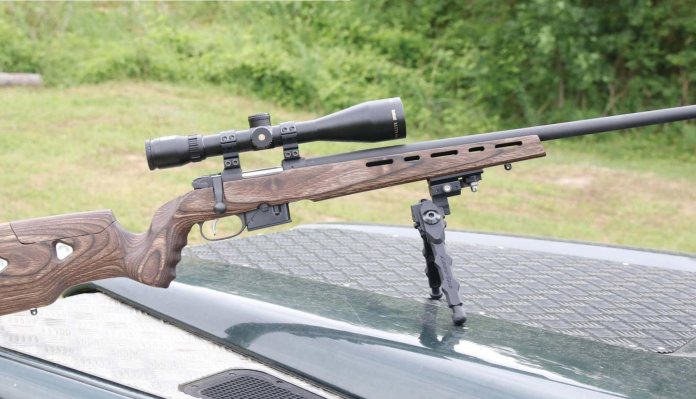 Česká zbrojovka Uherský Brod, better known as CZ of the Czech Republic offers their neat, little CZ527 bolt-action rifle that seems to have been with us forever and shows no sign of going away. Essentially a mini Mauser 98 action, its beauty is its compact size, not a short action, but more a micro and designed to date for the true small calibres: .17 Remington, .17/22 Hornet, .204 Ruger, .221 Fireball, .222/223 Remington, 6.5mm Grendel, .300 AAC Blackout and 7.62×39mm.

Riflecraft offered a semi-custom version in 22 and 6PPC, called the CPR (Compact Precision Rifle). Since that time, I have commissioned two more variants. The first, a 22” medium weight chambered in 6.5 Grendel in an HS Precision Kevlar stock from Riflecraft, based on the CPR. It proved a great little small/medium deer and fox rifle and accounted for a lot of game. The second, a re-barrelled and stocked 23”, 222 Rem from Enda Walsh, Custom and Precision Rifles, which is a real tack-driver.

Over the years, I’ve seen a lot of different factory models, in some unusual configurations, but the small centrefire premise remains. On test, is the Varmint that I first saw at this year’s British Shooting Show on Edgar Brother’s stand. What made it stand out was initially it’s long, 24”, medium/ heavy barrel and it’s non-CZ FORM stock. FORM is a UK stock maker, who offer a range of products and Derek Edgar (MD of Edgars) told me that they are making furniture for both their CZ and Savage ranges for them, though also offer a wide choice of makes and models for retail and wholesale too.

I was initially struck by the FORM design, which to me had hints of the Norwegian GRS (Grodas Rifle Stocks) Sport/Varmint model. Called the Carro, this is what they say about it: ‘This stock gives a strong, wrap-around grip with the trigger hand. This is an all-rounder with a classic hunting style but also offers the option of a thumb up position when shooting prone.’ So, in some ways, this is a test of not only the 527 but also the Carro furniture it sits in.

he steel receiver is classic M98 with front and rear bridges, twin forward lug bolt locking, with an external extractor claw. It has a blade-type ejector, as opposed to the more modernspring/plunger design, with ejection force being reliant on how fast you cycle the action. The bolt handle curves out and down and there’s a cocked action indicator in the shroud. The safety catch always seems to me to be back to front. It’s a rolling lever rear/right of the action that pushes forward for SAFE and pulls back to FIRE; but, with two 527s in my collection, I have got used to it.

Feed is from a single-column, detachable box magazine that fits into a very distinctive well with angled sides, with the release catch on the right side at the top. The bolt release catch is positioned rear/left on the action and the trigger is a single set design that offers a standard pull weight of around 2-3 lbs. When cocked, if you want a lighter release, just push the rear of the blade forwards until it clicks (sets) which drops the pull to around 1.5 lbs. But be aware, as the break is fast and light!

Typically, the Varmint does not come with iron sights and like all 527s, regardless of calibre or model, there are two, integral 15mm dovetails for scope mounting on the receiver bridges. The rear base has a cut-out for a lug that acts to stabilise the set up. The original Czech, Kozap ring/bases show this, as do the sets made by Sportsmatch. With both Leupold and our own Tier One offering 30mm ring sizes, all the Kozaps I have seen have been 25.4mm/1” diameter. CZ do not include mounts.

The medium/heavy, 24” barrel is cold hammer-forged and cut for a 1-9” twist rate, which is a good all-rounder if you want to use 50/55 and up to 69/70-grain bullets. Earlier models (pre- 2002) were 1-12” rate only. The muzzle is cut for a 5/8 x 18” TPI thread with protector. With this length, one might expect good velocity and energy from this model’s 223 Rem chambering. The Varmint was originally designed for the American market and offered in a standard wood stock or grey laminate with the latest variant offering Kevlar composite furniture made by HS Precision, with an integral, aluminium bedding block. Supported calibres are the .204 Ruger, and .223 Remington, though the CZ USA website also notes a 17 Hornet version, all with the 24” tube.

I fitted the Varmint up with a Bushnell Elite 6500 2-16x50 in medium height Sportsmatch mounts, along with an Ase Utra S5 moderator from Jackson Rifles. It’s quite compact and although all-stainless in build, does not imbalance the rifle. Ammunition went to Geco 55-grain FMJ/Match and RWS 55-grain soft tip, along with my pet 223 reload; a 69-grain Sierra Tipped Match King (TMK) using 23.4-grains of Ramshot TAC.

The FORM Carro stock is in a mid-brown laminate with a square section, tapered and ventilated forend that fully, free-floats the barrel, twin QD sling studs are fitted up front with one at the rear. The inlet is precise and pillar bedded, but not synthetically. The pistol grip is angled at 60° and shows finger grooves and a thumb shelf. The butt is deep, with a vestigial gripping shelf at the rear, it’s finished off with a sliding metal plate with a slim LimbSaver rubber pad. The flush-fit comb is 5.5” long and sits at the front of the top section, so offering better head/cheek support. Both are adjustable by recessed, triangular aluminium buttons, stability is achieved by a central, threaded rod with plain ones either side. Length of pull (LOP) goes to from 14 - 15.5” and comb height from 0 – 1.5”.

In use, the butt adjustment and shape are good, offering proper support; however, I found the finger grooves a tad too closely spaced for my hands and would have liked a bit more relief on the one behind the trigger guard. However, the thumb shelf worked well and gives a very natural position.

Ammo-wise, the 55-grain fodder showed near identical performance to when I used it in the Anschutz Tactical 1771 last month. The Geco was producing 0.75” with the RWS hovering around the inch; however, I feel that with the right recipe, a 55 could do better. The reload, as expected, really sang, dropping groups to around 0.5”, see the separate data table (ballistics).

The age of the general mechanical design of the 527 shows through, certainly when compared to more modern rifles. The bolt handle is small and rises quite high, so you need to be using medium/high mounts to clear the scope’s eyepiece bell. You must reach for the safety with your thumb to pull it to FIRE, consequently breaking your firing position. For a right hander, the magazine catch would be better on the left, as operation is a bit forced. The trigger shows a short take up in standard weight at around 2-3 lbs, and in set mode breaks very light and crisp at about 1.5lb; you really need to practice this, until you’ve got it right. However, both allow the shooter a decent release, so they can concentrate on keeping the sights on target.

Although a tad archaic in mechanical design, the CZ527 is near unique in offering a true micro action for a wide range of short calibres that will allow different uses from popping squirrels with 17 Hornet up to small/ medium deer with the 6.5 Grendel and most things in-between. For me, the Varmint is best in 204 Ruger or 223 Rem, where it can fulfil its role on all manner of critters, from crows to foxes, and even target work.