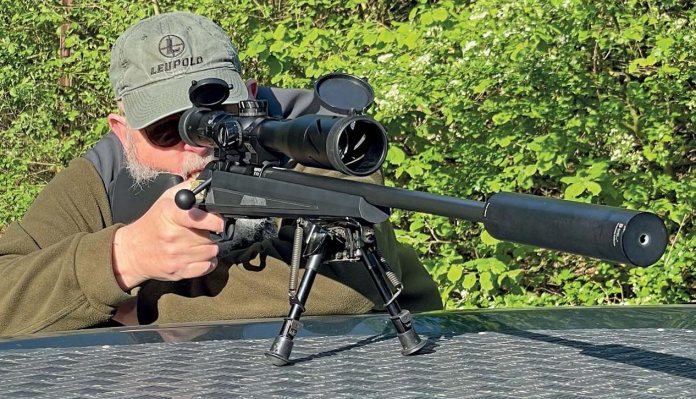 First of all, we have to address the elephant in the room, by the time you read this, it will be common knowledge that CZ has issued a recall on all their 600 series rifles.

Here’s what they say: “CZ 600 rifles were designed to allow the users to replace the barrels themselves to change the caliber. CZ has learned that if the barrel is improperly installed, it is possible that the rifle could still be fired, but potentially result in a failure.”

“Based on the CZ values of providing the best, most reliable products and never compromising our customers’ safety, we have decided to issue a safety recall on the CZ 600 rifles. CZ will correct the issue by permanently installing the barrels in CZ 600 rifles. To minimize the risk of improper assembly, barrel replacement and caliber conversions are now available only through authorized service centers. The replacement or removal of the barrel outside of the authorized service centers will void the warranty.”

Bit of a shocker, but not near as bad as it seems. Sources say that two 600s were sent for CIP proof testing and one failed, as whoever assembled it at the factory forgot to put the barrel retaining bolts in, well dah! However, the upshot of this mistake is CZ’s decision to render them all to fixed barrels, which is a great pity, as A – that was a great USP on a rifle costing £1126.99 and B – you can only get the barrel changed at an authorized service centre, as the whole point of a barrel/calibre swap is the fact you can do it as and when needed.

On test is the 600 Alpha and to further reassure you about the quality of the brand, I have taken the barrel in and out a few times, and shot a lot of rounds, with not one single problem. To be honest and despite the recall, if I had a 600, and I do like it, I would not send it back, as I don’t see a problem. However, if anything did go wrong then; you’re flying solo! On that point: THE RECALL IS TOTALLY VOLUNTARY! I have also heard that CZ is offering the option of your money back if you are dissatisfied, which is pretty fair too. Right, let’s get on with the fun part.

Much like a good curry, which has become a part of the British way of life, equally so, CZ firearms have been a staple of the UK shooting scene for many years. Their 452, in all its formats, was perhaps the most popular rimfire bolt-action, with the centerfire (527, 500 and 557) all based on the generic M98 Mauser action, also having A strong followings. But time moves on and newer designs started to eclipse their offerings.

It was less a case of them being better, more like CZ’s were looking and feeling dated! They responded first by discontinuing their 452 and 455 rimfires and superseding them with the totally new 457. And in 2020/2021 the 527 and 500/557 series also got the chop, in favour of a totally new design, that covers all centerfires needs, and very much, future proofs their sporting firearms into the 21st century.

I get the impression that this model is very much driven by CZ USA, but manufactured in the Czech Republic, as the calibre range and innovation would suggest that, also the competitive price. There are five models in the series, and to say they are a departure from what came before would be an understatement. So, what do you get? ALPHA - synthetic hunter/predator-type, RANGE - laminate, adjustable, target-type stock, sort of varmint/target, TRAIL - compact, AR15-style chassis carbine, LUX - classic sporter with hog’s back walnut stock and iron sights and finally the ERGO - synthetic, thumbhole-stocked sporter/varmint.

Calibre choice and barrel length options are a little eclectic, with old favourites and newer numbers, and some obvious omissions. On reflection, it might be a case of swapping old for new; as 6 and 6.5 Creedmoor replaces 243 Win and 6.5x55 and possibly 224 Valkyrie ousts 22-250 Rem? But I’m surprised they omitted 270 Win. Most noticeable is the modern trend for shorter tubes that might not always suit the cartridge. I would imagine that other calibres will be added. On test a 24” ALPHA in 223 Remington.

The Alpha is by far the most prolific, with nine calibre and four barrel length choices. Cartridge-specific, on all models is a choice of three action builds: Mini, Medium and Long. Out of the box came a very different and impressive design from what I was expecting. Gone, the M98-style, replaced with a slim, hi-strength, aluminium receiver, with integral Picatinny bases on the bridges. Suffice to say, if you saw the Alpha in the rack you would not think CZ even for a second. In some ways it put me in mind of Benelli’s Lupo.

The medium-weight, ambidextrous stock is made of a rigid, fibre-reinforced polymer and shows soft touch, plastic inserts at pistol grip, toe and forend for added hold. The generously proportioned trigger guard is integral to the build and the butt has a high, comb that drops down to a thick rubber recoil pad. The scalloped pistol grip shows left, and right palm swells, with a more vertical, position that works well in the hand.

The forend is long with an undercut tip and offers plenty to get hold of. QD sling studs are fitted fore and aft. Length of pull (LOP) was a tad short for me, even at 14”, but the general ergonomics made up for that, LOP spacers, would be a useful option.

The safety was a pleasant surprise, as they have integrated a Sauer 202/404- type, opposed, button system in the pistol grip/tang area. With the action cocked, push up on the button behind the trigger guard, and the one above pops up for SAFE. In this position the bolt is locked. With very little interruption to your shooting position, you push it down with your thumb to FIRE. This really enhances the ambidextrous nature of the stock. Also, the bolt release catch (under the rear receiver bridge on the right) doubles as an unlocking aid when the safety is on.

In 223 Rem, the bolt is quite slim and shows a semi-open face and 3-lug lock up, with the one at 6 o’clock being set back a few millimetres from the other two at 10 and 11. The medium and long action options offer a six-lug engagement and steel receivers and are drilled and tapped for Remington 700-type bases. The extractor claw is wide, and the plunger-type ejector sits at the base of the face. Operation is by a long/straight handle with a generous plastic ball end and shows a 600 lift angle. The action cocks on opening.

Feed is from a 5-round (in 223), detachable, double column, polymer box magazine. The release catch is in the front of the well and pushes in, with the mag falling free. It can be locked by moving it further forward. It’s plain to see that CZ has done some cherry picking on features, as there’s a four-weight, rotary trigger adjuster similar to Sauer’s 404. Weights go from 1.5 to 3 lbs. and you don’t have to take the action out of the stock, as it’s inside the trigger guard and set by an Allen key (included), nice and simple.

The 24” medium/heavy barrel tapers gently from its 0.910” reenforce to a 0.721” muzzle, with a 15x1mm thread with protector. All finished off with a recessed, target-type crown. The finish is an attractive, Cerakote-looking metallic grey, CZ calls it ‘Bobox’ (don’t laugh) and say this: “Bobox is our own heating treatment with anti-corrosive effect. The difference between Bobox and Cerakoting is that ours goes deeper into the steel during the process, so our layer is deeper, and finish is retained even when the firearm is scratched.” Rifling twist is a tight 1-7” pitch, so this 223 Rem should be capable of using heavier bullets and hopefully lighter weights too. One things for sure, it should get the best speeds no matter what you use. There’s minimal evidence of any free-float, but the combination of the reasonably wide tube and the long, rigid and stable forend seems promising.

In 223 Rem/24” this Alpha is more a varmint or predator build, but commensurate with its Mini receiver weighs just 6.6 lbs. and measures 43.9” overall. Even scoped up and with a moddy up front, it still feels surprisingly handy.

I picked two factory loads, Norma 55-grain TIPSTRIKE and Prvi Partizan (PPU) 75-grain BTHP Match and my pet AR15 reload using a Sierra, 69-grain Tipped Match King (TMK). This one is 0.5”-capable in my SGC Speedmaster, as is the PPU from its 1-8”, 20” barrel. So, I was expecting more of the same from these two, but the Alpha had other ideas.

It did not like the TMK at 2” or the PPU at 5”, I was very surprised. Even more so, when the Norma consistently printed 0.5” groups, which did impress. In fairness, it could be a simple case of rifle preference, as heavyweight .224” bullets in 223 Rem can be ‘tricksy’. I had planned more testing, with different options, but Sportsman needed the gun back ASAP, to check out the barrel security. But have promised to return it, so I can do my video and also continue testing. If I owned this gun, it would be for varmints and small deer, so would stick with the 55-grain fodder, or move up to 60-grains, which I have used in my 223 Rem, Mauser M03 with great success.

However, and despite preferences, the long barrel did return some interesting figures:

In terms of handling this Alpha was very well behaved. Although a tad short for me, the LOP was not a problem. Practical stock build, easy bolt operation, offering plenty of leverage and 100% feed and function. Loved the tang safety and easy trigger adjustment. One slight anomaly, when inserting the mag, you need to locate the rear end first and then snap the front up, where you’ll hear a click indicating it’s fully engaged. If not, it’s possible to push it up where it doesn’t lock, worth noting. Even when fully bombed-up (scope, moddy, bipod) it doesn’t feel too heavy or unwieldy. For what you’re getting the price is right at £1126.99. It’s a great pity that CZ’s decision has effectively taken away its switch barrel/calibre ability, as I doubt if few shooters will want to take that option, unless a barrel is shot out. Maybe things will change?

The barrel is retained in the split-front receiver by cross bolts that pinch it in, this is a near copy of how Sauer’s 202/404 does it. Take the action out of the stock, open the bolt, slack off the bolts and the tube pulls forward, on insertion, there’s a sprung that indexes in the chase for positioning. Now close the bolt, which trues up the engagement, as it locks directly into the chamber extension and torque the cross bolts to 5 Newton Meters (NM) with a 25 TORX drive. The bolt head is retained by a catch and slides down for removal.