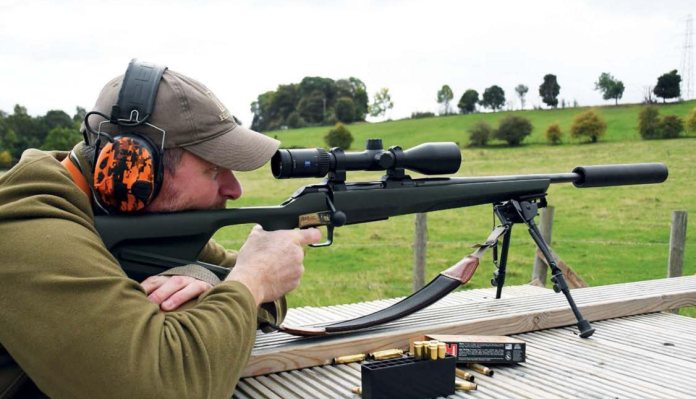 It has been a year since I attended the launch of CZ’s new 600 range and if I have learnt one thing, everyone wants modernised rifles, but there are certain areas of the world where if you change steel for polymer, you are somehow a traitor. In certain scenarios, I agree that material choices can be questioned but we don’t always use polymers solely to reduce costs, they also allow us to make shapes that were never possible before, save weight and add corrosion resistance etc. CZ was perhaps one of the last manufacturers to fully enter the synthetic world, yet their design and engineering have remained insightful. For example, the previous 557 had one of the finest polymer stocks of any synthetic rifle I have used, and the new rifles evolve even further.

The elephant in the room

The fundamentally new 600 action is certainly creative at the price point. I won’t cover all the model variants as there are many, but all are essentially scaled around similar mechanics and here, the 6 locking lugs offer a 60º bolt lift to unlock and cock the action. The bolt handle is a slim, uncluttered design with a polymer tip. The bolt’s face offers semi-controlled feed and shows a right-side claw extractor and a manual ejector emerging from the base of the face. This allows physical control of ejection force and the emerging plunger itself is sprung to slightly dampen the bolt’s stop as it reaches full extraction from the receiver.

To address that ‘elephant’, CZ initially planned to release the rifle as a switch barrel gun and fundamentally, it still is, but with the barrel retention screws now heavily threadlocked in position. Barrels can still be swapped but a dealer has to do it. At the product launch, I happily swapped barrels back and forth on the firing point with no concerns, but it seems someone somewhere in the world swapped a barrel without correctly re-tensioning the screws (torque settings are engraved on the action) and had one come loose. So, I presume the lawyers got twitchy and threadlock was added. Read into that how you will but I certainly have no doubts about the concept and the barrels were easy to change.

Some of the CZ 600 variants use a steel action that will accept a Remington 700 Picatinny rail, but the Ergo’s is aluminium, with twin Picatinny bases incorporated into the smoothly machined and hard anodised receiver for secure scope mounting. There is a 5-round detachable magazine on the underside with a release catch which when pressed, gently springs the waiting polymer unit into your palm. The same catch can also slide to lock it in position for security if desired. Being a twin-column unit, ammo presses straight in between the feed lips onto the follower, whether it is in or out of the gun. This is a system I prefer, as it’s easy to use in all scenarios and can be topped up in a hurry. Single rounds also feed smoothly to the chamber if dropped on top of the follower!

CZ has hung a single-stage trigger below the action, with a small Allen head screw accessible from within the trigger guard that alters four pre-set weights. The unit is delightfully crisp and a pleasure to use. I preferred weight ‘2’ for summer and will likely switch to ‘3’ for winter when the gloves are on. The blade is smooth polished steel with a gentle curve and there’s plenty of space in the trigger guard, which is moulded polymer and part of the stock. Safety is supplied with a plunger system that descends through the stock behind the action’s tang. Pressed down it allows the gun to FIRE or if pressed upward, from below and behind the trigger guard, it applies SAFE and locks the bolt. The bolt can be safely opened if the bolt release catch is simultaneously pressed when lifting the handle.

CZ cold hammer forge their barrels and this one is 20” long with a capped 15x1 thread at the neatly crowned muzzle. The steel is 16.7mm in diameter, with a straight taper towards the action. It shows a black chemical finish and is fully free-floated through the forend, which is spacious enough to maintain this through most shooting positions, even if there is a little flexibility visible.

There’s a steel sling stud underneath but at the rear of the stock, there isn’t a stud, the polymer itself is a slim vertical fin just 9mm thick, with a hole to accept a sling swivel. This also shows black rubber inlays like those seen at the grip and forend for assured tactile contact.

The thumbhole layout is ambidextrous, with a vertical grip and reasonably high comb in a smooth, mechanically quiet moulding that’s finished in a deep green for a modest, yet purposeful presence. There is no hollow resonance from the stock and the recoil transfer is linear, with little muzzle jump on firing. The recoil pad (CZ offers three thicknesses) is grippy and the overall length of pull comes in at a generous 14.5”. I will comment that if shooting prone, with a clenched hand supporting the underside of the butt, it’s narrow and concentrates forces, but this is a light hunting rifle and not a range tool in fairness.

The 1:10 twist rate of the barrel in .308 is probably a good choice, given the probable use of relatively long-forweight copper bullets. 1:12 is still OK, but manufacturers seem to keep the weights high even though lighter 110s, certainly in .308, offer the most familiar expansion effects.

This is a physically light rifle that’s perfectly balanced with a generous length of pull too. The stock offers plentiful forehand grip space and the cut-out for the thumbhole is also spacious. Because the stock does show slight flexibility, even though the barrel’s free float is maintained, you have to be a little more delicate when shooting from a bipod, as if you load up it up firmly, you will see the crosshairs move on the target. However, the rifle is fundamentally easy to shoot consistently, with such a good trigger and firing hand position/reach to the blade. A .308 produces as much recoil as commonly seen on UK rifles and I found the gun comfortable. It handled the blow well, so in .223 or Creedmoor it’s going to be a delight and the barrel is also thermally stable, which is a testament to CZ’s engineering and quality control. I mainly shot 3- round groups to conserve ammo but 5-shot groups showed no POI shift problems.

I was impressed with the CZ 600 from the instant I saw it launched. Some new features are innovative and patented but overall, CZ has tackled every aspect of the design using known, reliable solutions with tweaks to assure their reputation as engineers.

The bolt design is masterful, fast, smooth and with the control feed face, incredibly deft with ammunition steered precisely into the chamber at any speed. The slight buffer of the sprung ejector as the bolt reaches its stop is a slightly new ergonomic feel, whereas pretty much every other rifle hits a hard mechanical stop as it reaches the stroke limit.
I cannot fault the trigger. It’s precise and with detented adjustment, it’s easy to alter for your preferences and probably the one to beat at this price point.

Accuracy-wise, the gun meets its promised MOA standards and although the barrel interchangeability is now restricted to dealers, I have absolutely no problem trusting the mechanics, which I have myself, at speed on a range, torture tested with sub 0.3 MRAD return to zero in real-time!

I will likely cover other models in the 600 range over the coming year, but the Ergo was the one I liked the most after my first encounter, just because it seemed to slot so well into a UK calibre and usage niche. As someone who gets to try most rifles of any relevance, I really can’t knock this one. CZ hasn’t tried to incorporate every new feature, instead, they have updated and modernised core functions with aplomb. Prices are reasonable as well.