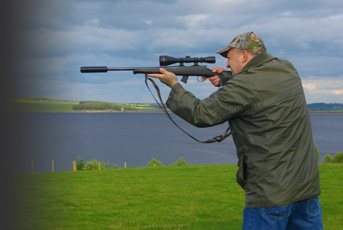 After publishing a review of my rabbit control DVD ‘Totally .22’ the editor of GunMart invited me to write about the main shooting tool that I use in my trade. I suggested that anyone shopping for a reasonably priced .22 hunting rifle should take a look at the CZ 452 Silhouette rifle. And here’s why…

I remember years ago when I was granted my firearms certificate I walked into my local gunshop and was blown away by the vast choice of rifles available both new and secondhand. I was advised at the time by an acquaintance who supposedly used .22 rifles all the time, to buy a Ruger 10/22 semi-automatic rimfire rifle. In his opinion it was the best rifle money could buy and he offered me the chance to test the rifle.

I remember it clearly to this day, I fired 3 shots at a target and the 4th shot jammed in the gun. He unjammed the action and dislodged the bullet, then reloaded the rifle and passed it back to me. I carried on shooting and the next 8 shots seemed to be fine, but then another bullet jammed. My friend said that it was not uncommon for this to happen but sometimes it will go all night without a jam. By this time, to be honest, I was getting really put off, but he offered to let me come along with him to shoot rabbits that same night so I gladly accepted his offer.

It was winter and we were in sub zero temperatures in the field. He was shooting and I was lamping for him and we shot about 8 rabbits with the gun seeming to work OK. Mind you the 9th rabbit had some rounds shot at it before we watched it run off. A good example of how to waste bullets with a semi-auto I thought. Then the next shot jammed in the rifle. He stripped it down again and dislodged the bullet, by this time we were both freezing and our hands were reminding us how bitter the weather was. We were approached by a shepherd who came over to see who was lamping and he offered us a cup of tea at his home on the fell.

We got into a conversation about rifles and the shepherd was telling us that he had tried most rifles in his time for rabbit control and in his opinion the .22 BRNO bolt action was the best and most reliable rifle. He produced this old BRNO from his cabinet and I was amazed at its simplicity and how easy it was to strip down.

After that night I was convinced I needed a reliable rifle that was bolt action and was easy to maintain if anything were to go wrong.

The next day I bought a used BRNO .22 with a 6x40 scope and a ten shot mag, I used that for a long time with no problems. The only modification I had done was to have the barrel shortened and re-threaded so it could be used in a vehicle as the standard barrel was as long as a clothes’ prop. Time moved on and new BRNO models came on the market - the CZ 452 range. So I bought a new CZ 452 Silhouette model.

The Silhouette features a synthetic stock and blued finish on all metal surfaces. Out of the box it preformed acceptably but it did have a quite heavy trigger pull so I invested in an Eric Brooks trigger modification kit. The kit cost about £12 at the time and took about 20 minutes to fit. The difference was amazing, and the improvement over the standard trigger was the difference between chalk and cheese. I was able to go from about a 5 lbs. factory pull to about 2 lbs. with no creep or over travel, and grouping tightened up to within a few millimetres at 50 yards.

I would suggest that any trigger modifications are carried out by a gunsmith, as I have seen some DIY modifications that have been dangerous due to the trigger being made too light and possibly being liable to accidental discharge. Not enough of us think of the trigger pull, but remember it is the last thing you control before the shot is released - so it has to be right!

To complete the outfit I have also fitted a SAK sound moderator and a simple Leupold 3-9x50 scope – I also invested in some 10 shot magazines.

This rifle is now used as the number one shooting tool in my rabbit control business and I cannot fault it. It accepts a detachable five or ten shot magazine. It has no iron sights, but the receiver is grooved to accept scope mounts, and most shooters would choose to use a scope anyway. The bolt action is smooth and quick to load, and it has a two-position safety at the rear of the bolt.

The Silhouette comes with a 16 inch barrel so it is a nice length to use when shooting from a vehicle or freestanding. It weighs just under six pounds with its black synthetic stock and is well balanced and consequently quick and easy to aim.

This is a very low maintenance rifle; I just wipe the outside with a clean cloth every time I use it and clean the bore as when needed.

I’m obviously a lover of this rifle, otherwise I would change it, but I honestly believe that it’s the best tool for the job that I do. After firing thousands of shots the rifle is as good today as it was when I bought it new.

To summarise; this rifle offers superb value for money, it’s robust with low maintenance requirements and cheap to run with .22 subsonics. Most of all, it’s an amazing bag filler
and for the serious rabbit catcher it’s a real money maker.

Steve was born in Ryton, Tyne and Wear, and from the age of 14 had a passion for hunting rabbits. He was taught ferreting by Bob, a local hunter, who gave him Snowy, his first ferret - an albino jill. By the time he was 16, he was already trying his hand at air rifle shooting, long netting, snaring and using lurchers and terriers for rabbit hunting.

Despite having numerous jobs including being self-employed and running his own business, his main interest always remained rabbit control, from which he has made a living since the early 90’s and still operates to the present day, selling rabbits to game dealers and butchers.

Not wanting to disillusion anybody, he stresses that this has never made him wealthy, as times have been hard sometimes, but he still has a passion for what he does, commenting that, “Every day still feels like the very first day to me.”

Steve now does most of his rabbit control using the CZ452 .22 Rimfire rifle (described in this article) and mainly drives the fields lamping rabbits. He has two DVD’s on rabbit shooting “Totally .22” and “Totally .22 – Subsonic Solution”, as well as an informative DVD on purse net making to Steve’s own design called “Purse net making tutorial”.