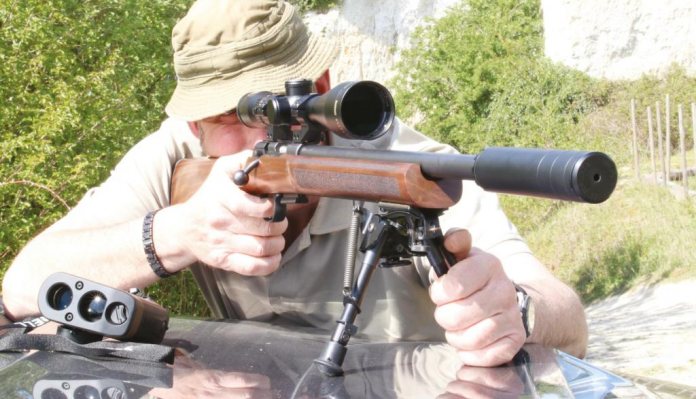 The original CZ452 bolt-action rimfire in 22 Long Rifle (LR) was launched in 1954, this was a traditional European gun, with its Hog’s back stock, long, slim barrel and iron sights. It was far from perfect, with its awkward safety and stiff action but proved reliable and a capable game getter and rose to be probably the top UK choice for a 22 bolt-action. Over time, it was upgraded with more modern stylings and calibres, which only added to its appeal. Its replacement, the CZ455 was near identical and launched in 2007, major differences were better manufacturing tolerances, an adjustable trigger and a switch barrel/calibre ability.

Now the original, 452 concept has taken a third evolutionary leap, with their reimagined CZ457. The rifle borrows from the 455, with an identical barrel change; however, the biggest differences are the new flat-sided action that houses a now fully-adjustable trigger, a conventional and better positioned safety catch, improved cocked action indicator and bolt release catch. Feed is as the 452/455; with polymer, 5 and 10-shot single column box mags (5-rounder supplied), available calibres are 22 LR, 17 Hornady Magnum Rimfire (17HMR) and 22 Winchester Magnum Rimfire (WMR). So, let’s look closer.

CZ shows seven versions, all in walnut and blued steel, from the basic to the exotic. UK importers, Edgar Brothers, currently only bring in three; the Varmint, the Royal and Match Target Rifle (MTR), choices that seem to tick all the major boxes, on test is the MTR. This model is the biggest and heaviest and has some serious curb appeal! However, my gut feeling is that the standard Varmint and the more traditional Royal will be top choices.

CZ, as usual, use good quality walnut, with laser-cut, textured panels, a rubber butt plate and three QD sling studs (two up front and one in the rear). I’ve been to their factory and seen it in operation and it’s an efficient and effective way of applying this finish; plus, allows for a lot of variation and innovation. The forend shows the legend ‘CZ 457 MATCH TARGET RIFLE’ on both side panels, with their logo underneath and a strip on the left side of the butt saying, ‘VARMINT MTR’. This is one big lump of timber with a large, squared off butt, vertical pistol grip with scalloped out and textured hand position. In some ways, it feels like a thumbhole, without the thumb cut out. The wide/deep forend is a beavertail-type with a sharp, angled-in tip, which offers a generous free-float.

The action void shows front and rear aluminium pillars; and, although the receiver is a snug fit, there’s a steel, removable recoil lug, that unusually sits at the rear of the action under the tang. I’ve never seen that on a rimfire before, as the receiver/stock fit is normally enough to keep things snug. Length of pull is 13.75”, which was a tad short for me.

The cold hammer-forged barrel is 20.5” long and shows a 0.865” parallel diameter with ½ x 20 UNF muzzle thread and protector, there’s also a 16” option. Calibre choices with the MTR are 22LR and 17HMR, twist rates are 1-16” and 1-9” accordingly. CZ says it has a Match-type chamber, whether that’s for all calibres or just the LR is uncertain. As an HMR devotee, I’d say get the longer tube, to maximise velocity potential! As can be appreciated, the weight of this model, at 8.5 lbs un-scoped and un-moderated, is not really a walk about gun. The barrel is retained by two, angled grub screws at the lower front of the receiver, these impinge onto angled flats on either side of the re-enforce. Tests with a CZ455 showed that the set up is secure, but you do need to check zero after switching. On that point, the magazine well is dimensioned for the magnum-length; so; if you change to 22 LR, a filler block and retaining pin is included to take up the space at the rear. Change over takes about 5-minutes, the bolt remains the same, as all three calibres use the same head size!

The new trigger offers three adjustment options, looking at the lower front of the housing you get: top one (with lock nut) weight of pull and reset, the middle (flush grub screw) over travel and on the top inside of the blade sear engagement. Adjustment range is from 8 to 15 Newtons (1.75 to 3.37 lbs) and the travel may be adjusted between 0.5-7 mm. In use, the smooth/curved blade offered a clean, crisp, light and readable break from the box and I saw no reason to fiddle with it.

The bolt is your standard CZ452/445 design at the front, with twin, opposed extractor claws, with a fixed, blade type ejector in the receiver. Where it really differs, is at the rear, with an angled back handle that offers a 30º lift angle, along with a re-designed shroud with a red, cocked action indicator pin, much better than the original. As before, the shank of the handle engages with a cut-out in the receiver to lock. Plus, there’s long lug on top, that sits in a slot in the receiver, doubtless to aid stability. CZ says that they have reduced the firing pin weight by 60% for a faster lock time.

The safety has been re-designed and re-located; that horrible and normally stiff, rotary lever on top of the bolt shroud has gone, which was a pain! A normal rolling lever is positioned rear right, which pushes forward to FIRE (red dot) and back for SAFE (white dot). On SAFE, you still get bolt operation and there’s a proper bolt release catch rear left. As before, there’s an integral 11/12mm dovetail for scope mounting.

So far, so good

So far, I was very impressed with the re-think, as it shows some definite and long needed improvements and a high standard of build quality and innovation. So now it was time to get it rigged and ready for testing, given that this is a more a sit and shoot rimfire, I was not bothered about putting weight on.

On top went a Bushnell ELITE 6500 2.5-16x50. Given the ability of the 17HMR, my own gun can head shoot rabbits at 200 yards with no wind, this appears to be a good choice of optic, as it offers side parallax, Mil-Dot reticle and dialable turrets. It went into a set of Sportsmatch 30mm high, reach-forward mounts (HETO38C), which helped with the shorter LOP for a comfortable head position. The moderator was a Wildcat Panther 17 Reflex, up front a Harris BRS bipod. Ammo went to Hornady 17-grain V-MAX and Winchester’s 20-grain HP loads.

In use, the 457 feels very stable, due no doubt to its greater weight, bolt operation is firm but not taxing and the action cocks on opening. The safety is much easier to operate, although you tend to break your firing hand position just a little as you work it, but it’s no big deal and as I said; a vast improvement over the original system. The large, deep and tall butt offers good hand and head/scope alignments and the forend is 100% rigid with a generous free-float. Add in that new trigger and it made me think it was going to be a serious shooter. My plan was rabbits out to 200 yards, but that was thwarted by the weather, so I had to content myself with the range test performance, which showed some good potential.

My ammunition choice was Hornady’s 17-grain V-MAX, which is the UK favourite, as it was launched with the rifle, now a good few years ago. Whatever brand, this is doing around 2550 fps and generating approximately 250 ft/lbs at muzzle, both these figures drop to 1378 fps/72 ft/lbs at what I consider its maximum, ethical range of 200 yards. Energy-wise, a decent 22 sub-sonic, like Winchester’s 42 MAX, is doing 75 ft/lbs at 100, so no worries about lethality when you connect at 200 with the 17HMR!

My other choice was the heavier 20-grain, Super X hollow point load from Winchester. This weight appeared a few years after the 17-grainer and I quite liked it at the time, with a quoted 2375 fps giving 255 ft/lbs and 1273 fps/72 ft/lbs at 200. However, it does not seem as popular today, although could be marginally better for close range foxes; for that, read sub-100 yards.

Before going further, I would say get yourself a couple of 10-round mags, as that single five is just not enough payload; either way, get a spare no matter the capacity you favour. Feed and function was excellent, and the well-positioned safety too, as it literally promotes safer handling due to its ease of use.

Above mentioned figures are factory quotes, so it was time to see what the ammo was actually doing. 17HMRs can be a bit fussy on cleaning, so I gave the bore a dig out and fired five fouling shots for each load. Hornady’s 17-grain V-MAX, states 2550 fps/254 ft/lbs, however it exceeded this considerably, at 2752 fps/291 ft/lbs. This was not a fluke, as I was sent the ammo last year and initial tests showed similar figures, which at 200 yards gives 1509fps/86 ft/lbs. The Winchester 20-grain was the reverse, at 2285 fps/236 ft/lbs (muzzle), which at 200 falls to 1223 fps/66 ft/lbs, with a near 50% increase in drop. Still more than adequate.

Accuracy-wise, the barrel did need a bit of shooting in, with initial groups being a bit spotty for both. These shrunk after about 50 rounds, with the Hornady load giving a best of 0.6” at 100m, with an average of 0.75”. Winchester’s best was 0.8” but kept it all sub-MOA. Once sorted, I ran about 200-rounds through the rifle in the day, to see if it got cleaning-fussy, which it did not. My Ruger M77/17 All-Weather (stainless) was and still is a ½” gun, but when new would lose it after 16-rounds and had to be cleaned. This went on for some time and, these days, I still have to clean it every 250-shots. I’ve found carbon steel 17s don’t tend to suffer from this.

I enjoyed my time with the CZ457 and reckon it’s a good one, prices are keen too, certainly compared to some of the opposition. My choice would be the 20.5” Varmint in 17HMR as it’s lighter and more duel role, when compared to the big, heavy and impressive MTR.

If the MTR is a bit much for you, then CZ offers two alternatives. The Royal is a pure hunter with a lighter, premium grade, sporter stock and slim line barrel and weighs 5.9 lbs. The Varmint shows heavier but more conventional furniture compared to the MTR, though the barrel profile looks the same and tips the scale at 7 lbs. Both offer 22LR, 22WMR and 17HMR chamberings in a choice of 16 and 20.5” tubes, all threaded.