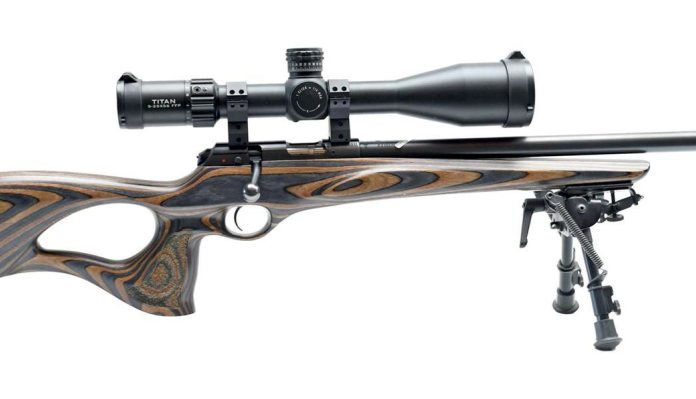 It wasn’t so long ago that the laminate stock upgrade was a popular route in customising any action for which the correct inlet was available. CZ has set out with their rimfire to offer variants to suit the needs, stature and aesthetic preferences of most shooters and although fundamentally no more or less accurate than any of its stable siblings, it brings ergonomic interaction into prime focus.

Starting out with steel, CZ’s cold hammer forged barrels are available in .22LR, .22WMR and .17HMR in this format. Plus, like other 455/457 actions, the system benefits from refined mechanics, materials and an easy barrel change capability. Yes, you need to release the action from the stock with twin T25 Torx action screws spanning the magazine well, but this alone reveals why CZ are leading the field, with bedding pillars and a precise inlet supporting the facetted bottom action. It speaks volumes that when I remove and replace an action into a factory gunstock, then torque the screws down, I detect a ‘stop’ point at which the screw ceases to spin freely and the torque rises until you get that ‘click’, to say tension reached. No squishy stock deformation as the action is forced into the stock.

To swap the barrel, undo the two impinging Allen screws aside the barrel tenon and all slips free. If you do the reverse and add the spacer/correct magazine (included in barrel mini sets), hey presto, different calibre, same ergonomics.

The .17HMR test rifle shows a heavy barrel that’s 20” in length and parallel in profile, with a 21.8mm diameter. It’s screwcut ½”x20 for a sound moderator and comes with a protective cap. It shows a perfectly machined crown face and threads below the matte blued surface finish.

The barrel is fully free-floated above the forend, which is 40mm wide adjacent to the front sling/bipod stud. This offers plenty of space for a handhold without the thumb or fingers touching the barrel and affecting harmonics. It is not overly cumbersome. If shot from a bipod or rest bag, it is realistically inflexible, unless ridiculous force is applied.

Moving towards the middle, the magazine well sits underneath and is recessed quite deeply, with the release catch sitting to the front. The polymer magazine holds 5-rounds of .17HMR in a single column and is loaded from the front when removed from the rifle.

The trigger guard itself is formed in the laminate structure for a spacious, yet refined profile. Inside, there’s a curved, polished blade and plenty of space for a gloved fingertip. This trigger is a single-stage unit and as supplied, broke with around 95% crisp feel (minuscule perception of creep) at 32oz./897-grams. CZ allow you to adjust the trigger and this not only makes it how you want, but means it is serviceable for the life of the rifle.

Further thoughts on the stock are that the creative use of size and shape reflects upon the size of the stock blank used. It’s also good to note the inlet is well sealed from atmospherics, not just the external stock surfaces. This is a nod towards CZ attending to smaller, less easily noticed details that benefit the rifle long term.

The top of the steel action shows an 11mm dovetail for scope mounting, with plenty of space available to enable the use of large optics if desired, not just compact units. Although the CZ family offer a decent length of pull on the latest guns, many rimfires are far too compact to make efficient, comfortable use of large, modern scopes. CZ offer 107mm of dovetail real estate, spanning 70mm to the rear and 37mm in front of the ejection port.

Looking more into the mechanics, the bolt shows extractor claws on either side of the controlled feed face. There’s an intelligent, chisel-tip firing pin that also offers a flat upper area to meet the breech face, preventing long term damage to the firing pin during dry firing.

The bolt stroke is 1.7”/42.3mm and ultimate ejection ferocity is controlled by your preferred bolt speed. The rifle uses a manual ejector that is exposed on the lower edge of the bolt face, as the bolt is itself drawn over it when cycling the action. This is all standard rimfire stuff (the firing pin is a rather special CZ cherry on the cake) but done with refinement on this superb action design.

The bolt shows a 20mm spherical tip on its curved handle, with the short lift avoiding any likely scope interaction. I have yet to suffer any failures with this or any other 457 when it comes to feeding from the magazine or ejecting. 20-grain XTPs in .17HMR, with their flatter hollow point meplat, are a little more problematic in some rifles, but not in this CZ. There is a left-hand side bolt release catch and it’s impossible to jam or stutter the smoothly flowing bolt stroke, even with deliberate brutality.

Each to their own

If we look at the ergonomics of the stock, this is where the laminate shows its most distinctive features. The thumbhole pistol grip offers a spacious, ambidextrous hold and additional stippling for grip on the otherwise silky-smooth grey/brown laminate. The reach to the trigger blade from the throat of the grip is 83mm and like the 14.25” length of pull. It certainly won’t disappoint taller shooters with longer fingers.

A hog’s back profile defines the stock’s comb, and this offers curving, versatile, vertical alignment, depending on the scope height and the length of your neck for a good cheek weld. It’s quite broad, and I would say it will suit those with smaller cheeks better.

With a grippy, stippled recoil pad that locks into your shoulder, plus a stiff forend and stable bipod support, this gun is surefooted from prone or off the bench, where its heavier build seems most suited to the role of a varminter or precision rimfire. The underside of the butt offers another stud for a sling, positional support for a soft rear bag and a spacious curved profile that allows easy non-shooting hand access to manipulate that bag.

On the range, I was greeted by typical windy winter weather and I’m not going to say that doing some paper punching with .17HMR delighted me, due to these conditions, but was perfectly representative of real-world conditions and allowed me to trust the CZ even on the bad days. I used 17 and 20-grain Hornady ammunition as well as 15.5-grain Winchester non-toxic, but the latter was very inconsistent and was discarded on safety grounds. The Hornady variants showed the barrel to be quite ‘fast’, offering chronographed muzzle velocities over the above those printed on the box. Both rounds were capable of 5-shot MOA groups on target at 100m. More ammunition and some windless range time may well have shown one of the fated ‘1/2” groups’ so favourably shot once and stored in a shooter’s wallet, but I don’t hold much time for that from the .17HMR. It’s a great performer for hunting, with superb terminal ballistics, but for specific target usage, I would choose a .22LR, regardless of range.

CZ’s Thumbhole Laminate version of the superb 457 will appeal to those wanting longer range capabilities and the sleek, refined looks of coloured, laminated birch. The stock may be a little too chunky for some, but that’s the joy of the 457. A little research and they already make the right gun for you, no need to modify anything. I have now used six variants of the 457, finding all to pair the mechanical perfection of the action to modern ergonomics more befitting precision target as well as hunting uses at a low cost per shot, that rimfires are becoming more drawn towards. Frankly, CZ changed my perception of the rimfire rifle with the 457 from day one. I now shoot them in preference to centrefires for pure enjoyment, the technical challenges and the experimentation offered.