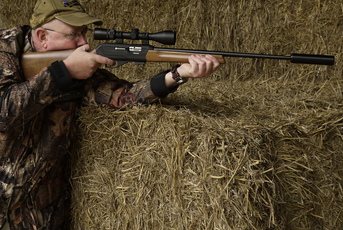 With the growing interest in what I would term as the more hi-tech and hi-capacity semi-auto rimfire rifles over the last 10-years or so, many of us forget the pure sporting designs. A case in point is CZ’s Model 511. Not the prettiest, this all-steel gun with its hump back look is more like their famous 452 2E bolt-action, in that it’s a small game getter and not a practical/action machine. In the USA a similar design would be Remington’s 552 Speedmaster, which these days is eclipsed by their 597.

However, everything moves forward and at the 2010 IWA show I saw the replacement for the 511 – the 512, which although in the same ball park has changed a bit! The look is sleeker, though still classic, certainly in the furniture department.

The receiver is now a 2-piece build with a polymer lower and aluminium alloy upper with a more rounded back end. Integral to this is an 11mm dovetail. The furniture is beech with a wide butt, angled comb and plastic recoil plate, up front is a square/tapered forend with under-cut tip and finger grooves. QD sling studs are fitted as standard.

The barrel is 20” long and comes threaded 1/2x20 UNF (with thread protector) for a moderator. No iron sights are fitted though I have seen examples with them on, but it seems likely the importers will not bother with this feature. Given the penchant for short 22 rimfires in the UK, the 512 shows a long, 20” barrel and pushes the tape at 39.3” and weighs 6lbs (un-scoped). Though perhaps a tad long it none the less handles nicely. In some ways the 512 feels and looks a little like the Remington 597.

Control layout and functions are basic and very much like the Ruger 10/22. The safety is a cross bolt at the rear of the trigger guard. Push right to left FIRE and reverse for SAFE. When set to SAFE the bolt is partially blocked. The magazine catch is a small, pull-back lever at the front of the well and the mag a 5-round polymer unit, which looks identical to that used on the 452 bolt-action. From this I deduce that a 10-shot is available.

There’s no automatic last round hold open and the bolt will close on an empty chamber when the last round has fired. However, there’s a manual hold-open catch inside/front of the trigger guard, which will automatically release when the bolt is pulled back a fraction. The trigger shows a smooth, mid-width blade with what I would describe as a somewhat variable pull…

Keeping it in the family I fitted a Weaver 2.5-10x44 scope and used Remington Sub-Sonic ammo, both also distributed by Edgar Brothers. Mounts were from Sports Match. Though eminently centrefire capable the spec of the Weaver also suits a rimfire nicely. With its mid-sized objective and generous magnification range this is a neat little hunting combo.

On the range the 512’s trigger took a bit of getting used to. The initial feel shows a short, heavy and graunchy take up followed by a firm break of around 6 lbs, which does not do a lot for the two pillars of accurate shooting – sights and trigger release. Continual use saw the take-up ease a little to a near single pull but with no let up on weight. It’s useable and can be learned, but for me I’d like to see a bit more attention at the factory to produce something that gives around 3-4 lbs from the box. In the field this cost me a few animals missed, before I got my technique sorted. However, where this my gun it would be straight off to the gunsmith for a bit of a tweak and tune up!
Accuracy-wise the 512 was grouping under the inch at 50-yards, which is good enough. The 5-round mag is a bit of a pain as it seemed I was always running out of ammo. A spare would be mandatory, better still a pair of 10-shots would be ideal.

I finished off the package with a SAK rimfire/airgun moderator from Jackson Rifles. I took the CZ out one morning to my favourite high seat, as though after deer with my 308 Ruger Scout Rifle there are always a few early hares. With a set 50-yards zero I bagged at brace at 64 and 76 yards along with a few squirrels, which are shoot on sight. So I was pleased though do admit to missing a couple due to the unfamiliar trigger…

Stripping is a little different as I discovered. Looking under the tip of the forend shows a large, slot head screw, undo this and pull the forend off. Looking at the front of the action you will see a cross pin that locks the upper and lower receiver halves. Drive this out and then pull the upper with barrel forward and off the lower. This will expose the breech block and its twin return springs. Different but efficient as it allows a fast take down and excellent access to all the critical areas – breech and bolt faces, guide rails and trigger mech.

Though not really any different from a Ruger 10/22 or Remington 597 in terms of operation the CZ512 is one of those rifles that will have an appeal to those seeking a slightly more classic look, that gives little away on performance and operation.

We Reckon:
Nice hunting semi, but the trigger needs sorting
Reliable and accurate
Barrel a bit long for no good reason