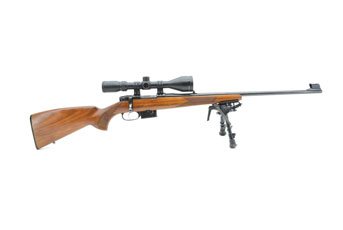 I regularly call in to Henry Krank and Co. in Pudsey near Leeds as I use a lot of ammunition these days and they supply a wide variety of components. I always take 5 minutes to glance along the racks and was delighted to see a tidy example of a gun I had wanted to look at for some time, a CZ 527.

The 527 is a delightful little design, perfectly scaled and suited to the calibres in which it is sold. The mini Mauser action with a semi controlled feed and full length extractor claw feeds from a single column, detachable, steel 5-shot magazine. The release catch is positioned on the right side of the mag well so initially you might fumble for it, as it’s not fore or aft like most systems! There is not a hint of plastic on any part of the gun; attesting to the old school build ethos, which is most pleasing! This example was the Lux and sported a nicely grained walnut stock in the European hog’s back format. It was flatter in profile than you would imagine the description implies!

Fully equipped with a hooded, blade foresight and windage-adjustable, basic U-notch plate on the barrel, it will certainly suit the adventurous, iron sight shooter. However, for those wanting the more formal scoped rifle as most of us do, two, integral dovetails atop the action will easily accept a scope with many styles of mount available at economical prices. At 17mm they are a little specialised with the rear base having a cut-out for a lug. Kozap (Czech Republic) make them, but your best bet is our own Sportsmatch who do some nice options that includes Weaver (17mm to 1”) adaptor sets and 30mm high rings. With standard height mounts and scopes with a wide eyepiece bell the inside curve of the bolt handle can foul on it. Here it’s a case of taller rings or a bit of scalloping out of the bolt lever to suit.

Several models are available with more conventional Americanised styling in walnut, laminate or HS Precision’s, heavy varmint stock with aluminium bedding block. Calibres span .17 to .223 Remington as well as the 22 Hornet with its diminutive rimmed case and the compact yet potent 7.62x39. The action welcomes re-barrelling and some of the bolt configurations such as the Hornet and ’39 are fairly rare in the modern bolt action world so might suit a 17 Hornet or 6.5 Grendel build. Editor Pete Moore has a custom in 6.5 Grendel which uses a 7.62x39mm CZ527 action with the HS varmint stock.

This example was in .222 Remington, a calibre I personally own and enjoy shooting with its old school `less is more` ethos. Wonderfully capable on vermin, foxes and small deer when ranges are kept sensible, noise is always minimal. Ballistic junkies may prefer the 204 Ruger’s modernity and practical shooters will adore the .223 Remington’s enduring reliability and easy-to-feed nature. Kranks were kind enough to loan the rifle along with some 50 grain Prvi Partisan soft point ammunition and it was a joy to shoot.

Light to carry at 6lbs and a perfect gun to chop short and screw cut for moderated use. The trigger was very good, breaking sharply at 3 ½ lbs. Inspection with the stock removed from the action showed a minimal but neat bedding job had been performed at the breech and tang. The 23” hammer-forged barrel was fully floating and the trigger shows three screws to adjust weight, sear engagement and over travel for qualified fine tuning without a blob of threadlock to be found. No corrosion was evident externally or within the bore and 5-shot accuracy was happily below 1” at 100 yards.

The one abnormality of the CZ action is the roller safety, which is positioned rear/right of the receiver and seems to be in reverse. As it pushes forward for SAFE and pulls back to FIRE and is a bit at odds with what the Americans build. At £325 I cannot imagine a more delightful and practical gun to own, showing classic European lines, iconic action design, deep blueing and straight grained well-proportioned woodwork. I think the only issue is one of cosmetics as the 527 is not a modern design or layout, you just need to appreciate for what it is, and this 222 Rem example will do you right for small deer species and of course foxes…