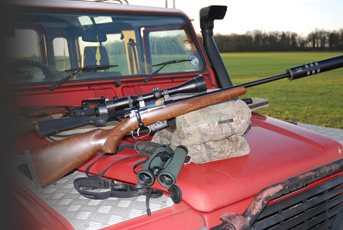 I have owned a lot of rifles but had little to do with the 22 Hornet. Like a lot of hunters I use rimfires (22 LR and 17HMR) for ranges from 50 to 150-yards, then when I need more power or distance I go straight for something like 233 Rem. However, the choice of small bore, centrefire calibres we enjoy today was not always so. Back in the 60s it was simple - 22 Hornet or 222 Remington and often dictated more by economy and availability than a knowledge of ballistics.

I have spoken to retired game keepers who did it all with the Hornet from foxes to culling deer. I never forget one old chap who is long gone saying; ‘all you do boy is keep quite and let em’ get close then shoot em’ in the ear.’ It would appear this policy applied across the board from muntjac to reds.

Today, and to a degree like the 222 Rem, the Hornet is losing popularity. However, it occurred to me that it might be an ideal short/mid range, low signature foxing alternative to a 22 centrefire and certainly more efficient/effective than either a 22WMR or 17HMR.

This it appears is the beauty of the Hornet; light rifle, recoil-friendly and easy to moderate. With the capability of throwing 35 to 45-grain bullets between 2600- 3000 fps, with muzzle energy figures around 700 ft/lbs, which is significantly more than the rimfire magnums, it seems to have something going for it.

I have to say I was interested, though in some ways the 22 Hornet is a bit of a conundrum. It can do rabbits and hares - though perhaps a bit much - but its perfect role is short/medium range foxing. But much past 100/150-yards; 223 Rem etc has more to offer. In Europe it’s still popular for combination guns either teamed with a shotgun or fullbore rifle tube allowing you to take all manner of game. I have shot a few combos and found the Hornet far from inspiring.

Last year I tested a modern bolt-action Hornet and even with hand-loading it could not shoot its way out of a wheelie bin from the inside; so it went back… Initial thoughts were the rifle, but it could have been a combination of the ammo as well as the launcher. However, all the evidence indicates this calibre can get the job done, so I opted for a CZ527American to give it another chance.

Ammunition was from Remington and Hornady. With bullets ranging from 35 to 45-grains in hollow and soft point and ballistic tip configurations I reckoned there was something there to get an idea on capability. From past experience I was not expecting miracles. But I assumed that groups would not exceed 1 ½”… which is not amazing but workable.

I already own a CZ527; though mine is a custom rifle in 6.5 Grendel built by Riflecraft Ltd. Essentially it’s near a mini Mauser 98 action. The standard version has a European, hog’s back butt; however the American shows a far more conventional layout with a straight comb and rubber recoil pad.

Feed is from a 5-round box magazine with a press-in release catch on the right of the well. The safety is a rolling lever rear right of the receiver, odd is the fact it seems reversed, to set to FIRE it’s pulled back (parallel with action) for SAFE it’s pushed vertical (red dot covered). Typically it only operates when the action is cocked and when on SAFE everything is locked.

On the left of the action is a press-in bolt release catch and the receiver bridges are cut for dedicated mounts. CZ offers the Kozap version (1” ring), though and an indication of this gun’s popularity in the USA Leupold also make 1” and 30mm rings, I have the latter on my Grendel. Likewise H-S Precision makes a Kevlar stock for the 527 Varmint.

The trigger is a single set unit inside a large guard. The standard pull is good and breaks at a reasonably crisp 4 lbs, if you want lighter then cock the action and push the blade forward, which reduces the weight.

The stock is a reasonable piece of walnut with decent chequering, as I recall this is now laser-cut, which makes for a far better texture. Typically QD sling stud are fitted front and rear. The 22” light barrel is free-floated in the forend and comes pre-threaded ½ x 20” UNF. Twist rate is 1-14”, overall the 527 comes up as a well made and presented product. Light and handy in a range of short calibres like 17 and 223 Rem, and 7.62x39mm, this is a neat little rifle.

Glass-wise I fitted a 3-10x42 Swarovski Habicht, which suited the light build of the 527, plus it’s quality, so one less thing to worry about. Up front a 22 Hornet-rated, rimfire-type moddy, which I reckoned would suit the package nicely…

My initial thinking was that if it could make 150/200-yards maximum and keep it inside two inches it would do the job. Ballistics are good compared to the rimfire magnums, though due to a problem initial results were disappointing.

All testing was done at 100-yards prone/supported. Initial results were shall we say pitiful, with the 45s shooting 3”+ in ragged and inconsistent groups. The 35s showed more promise but again inconsistency was the issue with groups ranging from 1 to 3” and all over the place. Suffice to say with these results I would not attempt a head shot on a fox at 100-yards and not even bother with rabbits or hares. It looked like the wheelie bin syndrome again. Though the ballistics are far superior to the rimfire magnums the Hornet apparently does not hold a candle to them in accuracy.

On the plus side recoil is minimal and the calibre moderates beautifully with something akin to a rimfire can up front, so what was the problem? I have heard that 22 Hornet rifles can have head space and chamber issues, but luckily the solution was far closer to home and totally solvable.

Using the lowest common denominator theory I cleaned the barrel, checked the action screws and repeated the test; no difference! OK what else; try it with the moderator off, a long shot I know but what the heck! Using the 35-grain loads, which did seem to be a bit better groups shrunk to an inch; I kid you not. The 45s, came down to 1 ½-2” and though not as consistent were certainly useable at 100-yards.

I then fitted a .30” cal, A-TEC reflex-style moderator and groups/performance did not change. I can only conclude the 22 can was misaligned so allowing the bullet to hit the baffles so causing the inconsistency. With this revelation I stated warming to the Hornet; though have to say this is the first rifle in this calibre I have used that performed acceptably!

A more drastic solution is converting your barrel to a K Hornet. This is a wildcat based on the original and the case shows a proper shoulder as opposed to the tapered, semi, bottleneck of the original so giving consistent headspace. Existing brass is fire-formed Ackley-style and it works. Of course it then makes your Hornet a reloading only option but also offers a bit more performance.

However I am happy to say that the CZ527 with the 35-grain loads allows it to shoot out to 150-yards + with acceptable ability and good energy for foxes and possibly body shots on hares or rabbits. For Charlie the 45s are fine up to 100-yards. What I really liked is the light and handy build of the rifle, with negligible recoil and easy moderation potential.

There’s little doubt that in the mid/late 20th century in the UK the 22 Hornet was an apparently popular and effective calibre. Or was it simply the only thing available and people knew less about ballistics and had lower aspirations about performance? I also feel it might have had its day as it seems that you really are taking a chance when buying one as to if it shoots or not! If anything the concept needs re-inventing as it’s still potentially a viable one. A rimless, bottleneck factory load with maybe just a tad more power could well be someone like Hornady’s next brain child…

Great little rifle no matter what the calibre

Bridges the gap between rimfire magnums and 22 centrefires