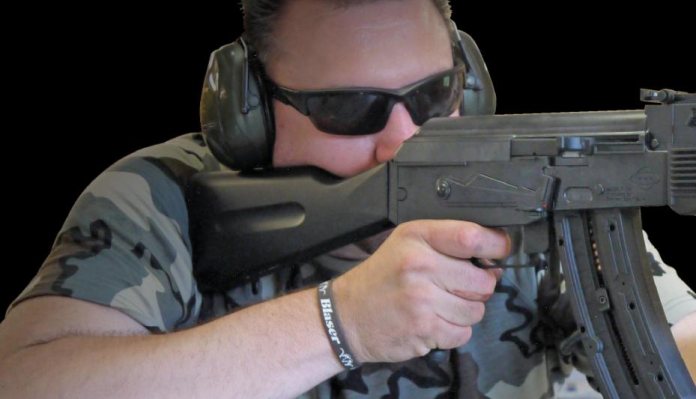 When GSG’s first rifle - the GSG5 (now GSG522) - hit the UK it caused quite a sensation. Here was an excellent copy of probably the most recognised, post war sub machine gun - the Heckler Koch MP5. It looked good but sadly reliability was less than ideal, which is a must for any semi-auto mechanism be it rifle or shotgun. Not long after they were offering an AK47 look-a-like, which proved a deal more reliable though still a bit disappointing.

Both rifles are still on the books but and I have been told from the importers (Edgar Brothers Ltd) that they have been upgrade to improve reliability. Their two latest products the MP40 and StG44 are a quantum leap forward from the earlier rifles in terms of realism, build quality and reliability. The latter I put down to both using a new bolt system very much like a 22 AR15s, which is easy to strip and clean.

This area was the downfall of the early MP5 and AK47 as they use a blow back bolt encased in a cage-type carrier housing. The main issue here was the unavoidable firing residue and the confined nature of the carrier allowed the crud to build up and cause stoppages. It had to be kept clean which means ease of stripping, again not the rifles strong suit as the carrier is screwed together and the whole assembly also screwed into the receiver. Disassembly not only took time but with steel screws going into zinc and plastic wear was exacerbated.

On test is GSG’s latest version of the AK and as I recall from the earlier test it looks and feels a little better! This rifle follows the later pattern AK with black, synthetic stock, a wooden version is also available, the butt is fixed but there’s a securing hook on the left side of the receiver that would be used with the side-folding stock. Options also include both wood and black guns with a R.A.S. rail that replaces the forend with a skeleton style that has a Picatinny rail that extends over the receiver, which makes for easier mounting of optics. The Rebel is a more distressed version as might be used by guerrillas; there are also two sidemounts for optics and a choice of 10 and 24-round magazines.

From the box the rifle needs assembling as the butt is removed, this is accomplished with just two Phillips screws (tool included). The build is recognisably AK47 and with few exceptions GSG have kept it faithful to the original. The receiver is either aluminium or a zinc alloy with a steel top cover and there is a lot of plastic substituted for metal. For example the cocking handle, trigger guard and mag catch, NV mount and dummy gas block are all polymer.

As with the whole GSG rifle family the 16” barrel is a slim, rifled, steel liner with a dummy outer to give the look and girth of the real thing. From past experience this has no affect on accuracy! At the front is a removable centralising nut that the muzzle locates into for stability. As I recall at one stage the old distributors York Guns offered a moderator adaptor that replaced the nut.

Sights are classic AK with a fixed A-frame up front with an elevation-only pin/post, at the rear is a U-notch/tangent-type marked from 01 – 14 in 100m increments. There is no provision for windage correction and on this example the gun shot to the left, with the only recourse to aim off. But given the sort of use the AK is likely to get that’s no real hardship!

Under the barrel is a short length of steel cleaning rod, which is too short for the 16” barrel by about two inches! Control-wise the AK has the usual, large push-forward magazine release catch at the rear of the well. GSG have retained the signature safety which is a large lever that flips up for SAFE and down for FIRE. It actually is much smoother than the real thing though still retains the tell-tale ‘clack, clack’ noise as it goes on and comes off of the real AK. The major change here is a hook at the front of the catch that allows a manual bolt hold open using the cocking handle.

Not authentic but most welcome is the rifle has an automatic last round hold open actuated by the empty mag and a safety that does not let the trigger operate unless the magazine is fitted. On that point the mag looks more like the 5.56x39mm version than the pronounced curve of the 7.63x39 original. It has pull-down exterior tabs to ease filling and is marked up to 24-rounds, I found that 22 was the limit.

The trigger is mushy but workable and it’s just a case of getting used to it! The butt is not that rigid and flexes under sideways pressure. Like the original it’s typically short with a low comb and small shoulder foot print. Testing was done with iron sights as no form of scope mount was supplied, which is a pity.

Filling the magazine is easy and though not authentic it’s ideal for the small 22 LR cartridge and much preferable to those systems that load through the top and don’t offer side tabs! I was not expecting miracles as the original rifle had not been amazing; I think getting up to 250/300-rounds before serious stoppages occurred. Here the AK took the middle ground and got through 400-rounds with main stoppages being failure to fully cycle and few actual feed jams. Nowhere near as reliable as my Smith & Wesson or GSG’s own MP40 but much better than expected.

As I have discovered over the years of testing these military look-a-like semi-autos the AK preferred standard velocity cartridges. I put this down to the 40-grain bullet they use and the medium speed tends to allow good rear pressure to cycle the action.

Once I had sorted the sights and aimed off about a post’s width to the left to compensate for the lack of windage adjustment the AK was shooting around 6” @ 100 yards. The irons are a bit thick and with nowhere near the finesse of the StG44’s but workable none the less.

The AK is generally OK and certainly more reliable than the original, however you need to keep it clean for maximum reliability. Stripping it down is a pain and I doubt few people will bother after the first time. I’d recommend a can of spray brake cleaner or similar to get most of the muck out. Picking your ammo type can help too. However, what will appeal to many is the price which is a pleasing sub-£400!