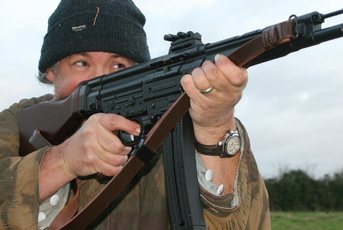 No other rifle in history has influenced the development of modern warfare than the STG44 or Sturmgewehr (storm or assault rifle) also known as the MP43 or MP44. Whatever you call it, this rifle was the pivotal design that launched the genre of modern assault rifles and still being the inspiration behind many current models.

Giles Cook of Norsted Engineering Services imports a .22 rimfire version of this iconic rifle. I had a fantastic and interesting day with him. Apart from being a firearms dealer NES also offer a deactivation service to the trade and public, as well as supplying blank firing guns for re-enactors, plus many films and TV programmes.

as soon as you pick up the STG44 you can feel that the weight is the same as the original and this combined with the overall feel of the rifle adds to the authenticity. In fact Giles also offers a deactivated version of this rifle for collectors and re-enactors – they are much cheaper than the original.

The review gun has a similar pressed steel construction as the original with all the relevant controls, buttons and rivets in the correct place and working, except of course the fire control button. When it arrived the finish was matt black and clean, but a few days in the Potts household had it looking well used and war torn.

Although it appears that the gas operating system is present, this is purely aesthetic to add to the originality of the rifle.

The pistol grip houses the trigger, sear and hammer. As mentioned before as soon as the butt is removed the pistol grip will pivot forwards on its retaining pin (mind your fingers). This actually allows all the crud and unburnt powder that all .22 rim fires accumulate to be easily cleaned out so regular maintenance is made easy.

The trigger is a single stage pull being a tad heavy at 6.6 lb, but this is not a target rifle. If you consciously squeeze the trigger then yes you feel the weight, but if you “just shoot” it is like any other .22 rim fire semi auto trigger. The safety catch sits behind the trigger being a single lever, top position for fire and bottom for safe and to lock the trigger.

That very characteristic bottom mounted barrel with gas system above has been copied worldwide and gives the STG 44 its instantly recognised look.

The steel barrel is encapsulated within the outer metal casing giving it the characteristic profile of the original. Its 16.25 inches long with 8 groove rifling and a standard 1 in 16 twist rate, so good for all .22 LR ammo except the very heavy 60gr SSS rounds from Aquila.

The barrel does not come completely to the end of the knurled muzzle end so it would be very difficult to thread and add a sound moderator.

The sights are again as the original, with a hood covered blade foresight being tapered and the rear sight is a simple ramp arrangement with elevation and windage adjustment and is characterised by being 3 inches above the bore, which has sighting-in issues, see later.

There is no provision for a scope mount although a base for a ZF41 forward mounted optic device might be possible.

Magazine choice is good with 25, 15, 10 and 2 shot versions being available. They are single stack and the larger ones are all supplied limited to ten shots (German Law). On the last round the bolt stays open indicating it is empty. A single large knurled push button on the right side of the receiver housing is depressed to release the mag from its housing.

The forend is clipped on and is pressed steel with the ribbed profile and actually is comfortable and authentic, but you must not grab hold of the mag for support as it will upset the feeding reliability.

The pistol grip has generous proportions and wood slabs to its sides that are grooved for added grip. The butt stock has a metal collar that connects over the receiver and is secured by the single locating pin. The rear section or butt is beech by the looks of it, with a matt lacquer, and has a cut through for a sling (I sourced one from Soldier of Fortune) and two metal end pads - again grooved for grip in the shoulder. There is also an accessory cap that pivots open on top of the butt section to store the chamber brush supplied.

On the side of the STG 44 it states that the action has been “set up” for High velocity cartridge use but as you can see from my tests this model coped with a variety of ammunition from the low RWS Subs at 892fps right up the CCI Stinger 1491fps rounds.

As you can imagine the heft of the STG 44 means zero recoil and muzzle blast, even with the HV ammo it was fine. I set up targets at 25 yards for the open sights and from a sandbagged rest I achieved some really nice five shot groups. But the real fun was had shooting at tin cans, water bottles, 35mm film tubs and other plinking targetsagainst a safe back drop. Because the barrel is a long way below the open sights I had to set the rear sight to 800 yards for a 25 yard zero.

Reliability was very good, I was expecting a lot of jams like other autos but I have to say even with the lower velocity ammo I only had a few light strikes, stack poles and non-ejects in the hundreds of rounds I fired.

Best accuracy from the subsonics came from the Eley and RWS loads, with 974 fps and 84.3 ft/lbs energy from the Eley’s group and five shots into 0.85”whilst the RWS likewise shot tight 0.95” groups, less a few fliers for each at 892 ft/lbs and 70.7 ft/lbs. The other subs all shot around the 1.0” mark for a weapon like this is actually very good so any of these would suffice.

The High Velocity were equally good with the best or tightest groups going to the RWS loads. These were very consistent and functioned well giving 0.85” groups and 1192 fps and 126.2 ft/lbs, not the highest velocity but I would trade that for good accuracy. The Federal 38 gr and Lapua HV loads were also accurate at 1.0” five shot groups being common.

Highest velocity as expected went to the CCI Stingers at 1491 fps generating 158 ft/lbs energy but accuracy was so-so at 1.55” however target ‘expansion’ was spectacular.

All the other HV loads function well and I guess it comes down to what is available and what is the cheapest to buy as a plinking round.

I have not giggled so much in ages and the real fun of our sport was realised to me again, just as I discovered it some 35 years ago. The STG 44 is what it is, if want a target rifle or rabbit gun forget it, if you want a bit of history that you can shoot and just have fun plinking at targets and tin cans then you cannot beat this rifle.

Personally I think it’s a bargain at £650 and is money well spent, I would love to see other WW2 arms reproduced like this one, wouldn’t a FG 42 in .22 LR be outstanding!

The importer, Giles Cook, is a true gentlemen and a very interesting guy to chat to, and I will be completing an article on his business and de-acts later.