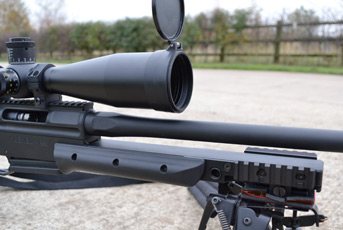 There is no question the Haenel RS8 carries all the hallmarks of a sniper rifle and although many shooters like the tactical look, what solid facts will draw them in to this well-equipped precision machine? Last year Viking Arms were kind enough to supply a Brugger & Thomet APR rifle that left a lasting impression of this style of rifle. Although undeniable very expensive at £9,000, it was a joy to use and the RS8 shows a remarkably similar approach and at half the price, seems a much more attainable goal if it delivers the goods.

The RS8 Basic in 308 Winchester arrived in a Peli hard case that looked fit for any eventuality. The gun gave the distinct appearance of `form` following function and ready for anything that could be thrown at it! Starting at the business end, a laterally ported muzzle brake crowns a 24”, hammer-forged barrel exhibiting a relatively slim 20-22mm diameter. The brake is clamped in position to remain perfectly `timed` and is screw cut 20x1mm to attach a B&T-style moderator.

The reinforced chamber area of the barrel shows a simple hexagonal profile as it swells in diameter which allows a simple change with nothing more than a 27mm spanner, although removal unless by a qualified ‘smith is unwise. The action is flat-bottomed showing a recoil lug and a modest `v` shape on its lowest portion that engages with an identical profile on the stock. Fastened in place with bolts front and rear and using two slim, hard plastic rails in the stock effectively beds the rifle.

Although generally hexagonal in upper profile, facets, channels and radiused sections decorate the action surrounding an ejection port sized appropriately for the 300 Win Mag offering that the RS8 can also be chambered for. A full length Picatinny rail is incorporated which seems to offer 20 MOA incline, although I have been unable to confirm this figure, but simple scope mounting is assured.

The bolt has a removable head allowing for an alternate calibre to be specified although it isn’t a quick change gun. The head retains 6 locking lugs offering a 60° bolt lift with a neat extractor claw embedded into one of the forward lugs and a sprung plunger ejector in the face. A black friction reduction coating is applied to the rear of the bolt body, which is finished with an AI-style shroud exhibiting a cocked action indicator that can be both seen and felt with the fingertip.

A 3-position, wing safety just behind the bolt handle offers three positions, forward FIRE, centre SAFE with bolt operation and rearward SAFE bolt locked. It has to be said the centre position did seem to lack a solid detente and had to be carefully applied and felt for. A bolt removal catch is positioned to the left of the action, and with everything finished in a matt black coating, nothing looks prone to corrosion.

The trigger is a bespoke unit offering the characteristic two stage operating style favoured by police and military. It can be adjusted for weight and position and showed a slender serrated blade that was easy to adjust to sit under the pad of my finger. The pistol grip is an AR15-type and is easily removed/replaced for something else of the same fitting, which is an excellent feature. Generous enough for a gloved finger, the aluminium trigger guard is part of the stock and flows into a 6-round detachable magazine with an ambidextrous release catch on the front edge of the guard. Easily operated and well sprung the mag free falls with no assistance.

The magazine uses a double-column feed and is long enough to accept a 300 Win Mag. Typically Haenel have used a filler at the rear to suit the COL of the 308 Win. With a 2.955” platform length there is plenty of space for a longer COL if you reload, certainly more than the 2.845” on an AI-style system. No problems with feed at all, likewise ejection was positive and consistent dropping the empties about 12” away!

The final element is the stock. From forend tip showing a 3-sided Picatinny attachment to the position of the grip, a single aluminium bar is accurately machined to support all the mechanics of the rifle. Relieved in certain areas to save weight there is a spigot mounting point at the tip for a Parker Hale style bipod. Along the forend polymer side plates are bolted on for a more comfortable hand hold.

Moving to the butt, although a folding stocked is available, this version was fixed and offers a quick-adjust cheekpiece with a sprung release button underneath. Square in profile, it also provides lateral adjustment using an Allen key but this requires disassembly and the whole unit must be fully lowered to remove the bolt from the action.

Length of pull is adjustable with the whole rear end of the butt extending on a telescopic bar. Equally the recoil pad can be moved vertically using a thumbscrew to suit the shooter’s preferences. Also telescopic is the sprung monopod that can be quickly deployed to give a third support along with the bipod upfront. It’s notched to offer quick adjustment, with a threaded base to fine tune the final position perfectly. All this is matched closely together with the aluminium butt hook that gives the rear supporting hand firm grip on the gun pulled into your shoulder. Flush cups for sling swivels are intelligently placed in several positions along the stock to allow a deceptively comfortable carry with a biathlon-style sling.

Jack of all trades it may be but 308/7.62x51 is a great cartridge! A test target was supplied and although not fully detailed it showed a single dirty hole shot at 100 metres with a 167-grain Lapua Scenar. I went through my ammunition box and turned out some similar 168-grain Sierra Matchkings and the trusty 155-grain Scenars. Though I never got the chance to refine them to this rifle, my initial zeroing session with a Harris bipod up front and Schmidt Bender PMII scope in Third Eye Tactical rings on top left me with few worries about the gun’s ability!

My ammo was printing the same single, ragged, 5-shot hole at 100-yards, just as well as 20 minutes later I was engaging a McQueens target at 300 yards in my club’s monthly competition! I had added a single shot follower to the magazine for the required 10-shot string as reliable single loading was impossible at speed but the gun was great to shoot otherwise.

The well-defined trigger broke at around 2 ½ lbs meaning I could hold on it without fear of a twitch setting it off and the break was clean. Setting up the stock and trigger had presented me with a well-fitting gun and the combination of the relatively high recoil pad in relation to the barrel centreline, and that brake left me shooting a gun with so little felt recoil I could see my own fall of shot in the sand trap at just 300 yards.

Although this is no lightweight, 308 can be snappy and in a fast fire situation, quickly returning to point of aim is valuable. Bolt operation was slick but a 60° lift always requires just a touch more effort than a 90° degree twin lug design. With the bolt handle angled downwards to project minimally from the stock, it was close to the firing hand for quick cycling. Also the raspberry-sized knob was a touch on the small size for a fast fire situation which is perhaps sometimes at odds with the RS8’s primary design ethos of a police and military rifle.

This is the kind of rifle that will do anything you want it to within its target range and weight specifications. An RS9 is available in 338 Lapua Magnum and this model I think suits the specification the best. In terms of smaller cartridges at intermediate ranges (300-800 yards) a custom rifle of similar value offers a wide choice of calibres more suited to punching holes in paper! The 308 in civilian circles is certainly now seen at a ballistic disadvantage apart from perhaps hunting. These days, a specification like the RS8 shows is undeniably set in its police and military heritage.