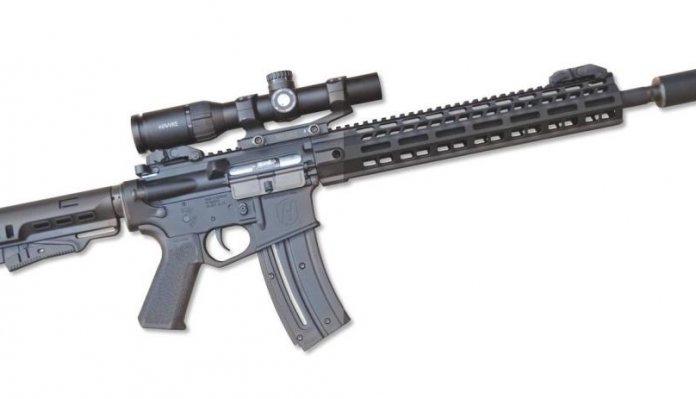 One of the companies that was in at the start of the 22 Long Rifle, semi-automatic military look-a-like wave has been Umarex/Walther. They launched many years ago with their Colt Tactical series of AR15 clones, with several options included a 20” A2 rifle and, perhaps most popular, an M4-type 16” carbine and later the Heckler Koch Hk 416. Externally, 100% copies of the real thing, but inside very different, they later added more options including the Uzi SMG, Beretta ARX 160 and another Hk, the 36, which were a little different and better by design.

Getting in on the game

It seems that this 22 revolution got some of the big companies excited and rather than producing something in-house, went to Umarex and others for an off the shelf solution. For example; Anschutz approached ISSC who modified their copy of the FN S.C.A.R. to suit for what they describe as ‘dynamic shooting’ requirements. Recently, I was contacted by John Rothery Wholesale Co. Ltd, with news of their latest rifle, the Hammerli Tac R1 22, which did surprise me a little, as this Swiss company has always been known solely for top quality match firearms and airguns. But, the world turns! I was not sure what to expect and what turned up looked familiar as the Tac R1 22 follows the modern AR15 build we so love these days.

The build shows a 16” barrel with a ¾-length, M-Lok-style free float forend. The upper and lower receiver halves are all-metal with the former component showing a Picatinny base that aligns with the full-length rail at 12 O’clock on the forend. The lower (on the left) shows the standard, finger-friendly 90º, flip lever safety horizontal SAFE, vertical FIRE, along with a bolt release/manual hold open catch. Nice, is the fact that as standard, the trigger guard is a one-piece build and has been enlarged for ease of access and the pistol grip has a back strap/web filler, which does give a better hand and trigger finger position.

The right side has the standard mag release button located at the rear of the magazine well; on the upper, is the sprung ejection port cover and behind it is a case deflector and forward assist and at the rear, the familiar T-handle charging system. The butt is one of the 6-position, adjustable length of pull minimalistic, L-shaped designs, plus Hammerli fit flip-up/down iron sights and up front is what looks like a mediumweight barrel with an A2, cage-type flash hider. The rifle comes with one 20-round magazine with the familiar slotted sides and pull down follower lugs used by Umarex for most of their 22 military clones. The whole thing looks good with a grey phosphate-type finish and nice and modern; so, very much in vogue, if you’re thinking in that direction.

To be honest, what’s inside is pure Colt Tactical and not all the controls function, though they look like they do. Saying that and compared to some of the original Colt series rifles, the Tac R1 22 did feel a tad slicker and in testing proved to be considerably more reliable. So, let’s look at what’s different about this AR clone.

With most 22 Rimfire ARs having what looks like a medium/heavy barrel, which is axiomatic for the calibre and build you could be forgiven for assuming that the Hammerli is the same, but it’s not. What appears to be a heavy tube is in fact an outer metal sleeve, which covers a slim, steel inner rifled liner, threaded at the muzzle; the brake screws onto it and tensions using the outer tube as a brace point. This build was used by Umarex on the Colt Tacticals and Hk 416, the Uzi and by German Sport Gun (GSG) on their MP5, AK47, MP40 and StG44 in a similar fashion. Truth is, it works far better than the layman might imagine, and I’ve never had any issues with accuracy with any of the above rifles and the Tac R1 22 was the same. All you must do is make sure that the muzzle brake is tight. As we shall see, it’s also possible to fit a moderator, despite what it might appear.

What you must bear in mind is that this rifle differs internally from your standard AR15 with no chance of adding after market extended controls or accessories. Which might put some of you off, but as we shall see, it fills a certain slot in the shooting community at a very attractive price point. As not everyone wants to throw £1000++ at custom guns, some of which don’t offer full control function either and, in that, the Hammerli will do the job near as well.

The first major change is the action, which is a standard blow back mechanism as are all 22 ARs; however, stripping out the bolt assembly requires mechanical assistance and tools, which is not the best system. The bolt sits in a metal Zinc or Zamak (Zinc alloy) cage complete with return spring, in truth disassembling this is too much like hard work and a blast of aerosol solvent will blow most of the gunk out of the nooks and crannies. With a 22 semi, this is very important, as, if allowed to build up, it will affect function and therefore reliability.

This build shows a bolt speed adjuster in the form of an Allen grub screw at the rear of the cage, which allows you to set up for various powers of ammunition, by altering the return spring tension. On the original Colt Tacticals, it did not seem to do much, but, as we shall see on the Hammerli, it certainly seemed to.

The receiver halves are separated by removing the two body pins like any AR, which gives access to the bolt for cleaning and adjustment. On my tester, the rear pin did not have a stop, so it’s easy to push out and loose; be aware. The trigger is not in any way similar and looks to be a pre-packaged unit that offers a very heavy pull quoted at 6-9lbs, I reckon it was at least 8 lbs +. The forward assist is there just for the look of it!

Though the hold open/bolt release catch is not functional, the rifle has an internal, automatic hold open that’s magazineactuated. On the reload, once the full mag is seated, just cycle the T-handle to chamber the first round. It’s also possible to hold it open then push your finger up inside the well to set the catch manually.

For the test, I fitted a Hawke 1-6x24, Frontier 30, Tactical Dot IR scope, a design well-suited to this sort of rifle. Ammunition went to Geco (40-grain) semi-auto, Winchester 42-grain MAX subs, Hornady 40-grain round nose standards, Norma sub-sonic 22 (40-grain) and three from eley; 42-grain force, high velocity hollow (38-grain) and 42-grain contact sub-sonic semi-auto. To fit a moderator, you need an adaptor that replaces the muzzle brake and screws on using a U-spanner (supplied) that offers a ½ x 20 UNF adaptor. I got mine from Riflecraft a few years ago, I believe they are also available from the manufacturer.

Fit and feel very much ticks all the modern AR boxes, the pistol grip fills the hand well and its high, rear fill-in section just gives that better trigger finger position. However, the pull well, very heavy and at first, I had to check the safety was OFF and as I said, looking at the build it seems there’s little to be done about it. Although a heavy trigger is not ideal, it’s no real impediment, as you can learn to work with it to a greater degree!

I started off with the Norma subs, as they were clocking 955 fps over the chrono and as might be expected feed reliability was poor; moving up through the various levels, this improved with some of the faster and heavier loads, but was still spotty. I broke the action open and adjusted the bolt speed screw anti-clockwise about 1.5 turns and things improved dramatically; so yes, it works. If you use HV and heavy loads, I’d say set the mech up to suit, as set light for everything you might batter the action prematurely.

Accuracy was about 1 – 1.5” at 50 yards, which is not bad for a semi-auto, certainly with the heavy trigger, chances are you won’t be using this for bunny-bashing! I ran around 400-rounds through and it proved reliable with a few ammo-related stoppages, which is to be expected. Overall, not a bad design and priced for those who want a 22AR for a bit of fun and action shooting that won’t break the bank!