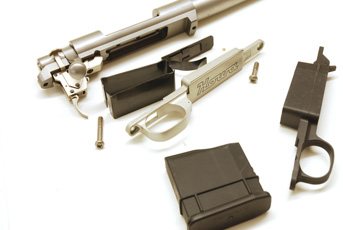 I know I have been banging on about Howa rifles a lot lately but they really are value for money! With a simple and proven action, good trigger and lots of stock and some feed options they are an excellent choice for the first timer or those wanting something to breathe some semi-custom magic into.

Highland Outdoors (importers) instigated their Dream it, Build It programme a few years ago. Essentially you could pick the action, barrel type/length/calibre and finish and it comes threaded then mate it to a comprehensive selection of stocks from standard sporting, in rubber over-moulded, laminates and fibreglass designs. As they handle both Nikon and Nikko Stirling optics too you could then pick a scope to suit, likewise mounts from NS and also the excell

They also offered the Legacy Sports box magazine conversion unit, which I have tested and use on my Weatherby Vanguard custom, which is identical in the bottom metal to the Howa. What if I want a moderator? Well that’s covered too with their new Sonics 45 range of reflex cans. The real beauty of the whole package was the rifle you wanted, how you wanted it to look and handle at what is still very good money.

I recently got a call from John Bright the head of Highland Outdoors and he told me they have a new rifle, which is specifically aimed at the UK market called the Stealth Hunter Combo, which is available, in both Sporter (light) and Varmint (heavy) barrel options. The calibre; what else 243 Winchester in a 20” (light or heavy) tube, cut for a 1/2x20 and 5/8x20 UNF thread accordingly. The stock is a Hough, rubber over-moulded unit (black or green) without the alloy bedding block and there’s more!

A Nikko one-piece base and match rings in which is an NS Diamond 3-12x56 with twin colour (red/green) illuminated reticule. Plus a Legacy box mag conversion (5 or 10-round capacity), Webley (Harris BRS look-a-like) Pro-Tilt bipod and up front a Sonics 45 moddy for 6mm. You also get a hard gun case and depending on model a blue or stainless finish prices start at £899 and go up to £1019, which given what you are getting is a lot of bang for your buck!

Given that 243 Winchester is by far the most popular hunting calibre in the UK, going with that makes perfect sense. Ammo is plentiful in any number of weights and bullet types; likewise it’s an easy one to load. I had the Varmint on test and its fat (.78” O/D) 20” tube tends to suit the dictates of fashion and function, though shorter barrels in 243 with lighter bullets can sometime struggle to make large deer legal energy of 1700 ft/lbs. We shall see!

he Hogue rubber over-moulded stock is the standard version, with the polymer inner chassis. This can be a tad flexible in the forend, though the heavy barrel might negate this a little. However, it’s good and grippy with a decent length of pull and recoil pad and will shrug off bad weather.

The Nikko Stirling one-piece rail fits easily though I did find access to the magazine a little cramped for loading. In this case I welcomed the inclusion of the box magazine conversion kit. This goes on without hassle and on all the rifles I have used it feeds without any fitting or modification. One thing I have found is that the release lever is at the front and as most of us tend to hold our rifles at the point of balance, which is usually around the action, it’s possible to trip the catch accidentally. Just be aware!

To swap over you will need a T30 Torx drive as that’s what Howa’s uses on the action bolts. Also when you remove the old floor plate system take out the steel mag liner too, as the conversion kit does not need it. Legacy says you can tighten the floor plate down to 50-55 inch/lbs, but just be aware that what the screws are bearing against is plastic!

The NS Diamond 3-12 x 56 scope has a 30mm body tube and shows a twin colour (red/green) rheostat mounted on the left of the saddle. The reticule is what they call a No 4 DOT, which is three thick posts at 3, 6 and 9 o’clock with a thin centre and 12 o’clock lines. The middle is not a cross hair but a free dot, which is also the only thing that lights up. It’s an able design and you can shoot deer all day long with it, under a lamp it’s clear enough at night, but I did find that you get internal reflection off the illumination system that gives a coloured cast to the sight picture. The more you turn it up the worse it gets so be aware!

The Webley, Pro-Tilt bipod is a good enough copy of the Harris BRS (bench rest swivel), which in my opinion is the best pod ever made. It has quick-adjust, pre-notched legs and rubber covers over the external springs to reduce the ‘twang’ noise as they deploy. The scissors clamp that attached to the QD sling stud is a bit floppy but tight when done up. Overall a good design and if you are going to reproduce something you might as well use the best as your inspiration…

With that done all that remains is to screw on the Sonics 45 moderator. I have tested these before and use them myself and they are excellent. This modular, reflex design comes with two C-spanners so you can strip the individual baffle sections for cleaning, also a tube of anti-seize fluid to stop the threads binding when they get full of crud.

For the test I used three brands of ammo – PPU 100-grain soft point, Norma 75-grain V-MAX and Winchester 95-grain Ballistic Silver Tip. As can be seen the shorter, 20” tube is velocity sensitive, with neither the PPU or Norma making large deer legal and the Winchester only scraping in with 90 ft/lbs to spare. With a 100-grain bullet you need to be making at least 2800 fps and with the 75 – 3200 fps.

It’s interesting what a few inches more barrel will do, last month I tested a Blaser R8 in 243 Win with a 22” tube and with the same PPU 100-grain soft point load it was achieving a tad over 1700 ft/lbs. As can be seen accuracy is not an issue and the easier handling of a shorter rifle is often more appreciated. But be aware of the potential for velocity loss and try a few brands out to see what works best!

No complaints on general feel and function, the action cycled smoothly and the plunger-type ejector kicked cases out easily no matter how fast or slow you worked the bolt. The trigger was excellent with a crisp and near drag-free break of 3 lbs, it’s easy enough to adjust too. But coming out of the box like that I say leave it alone!

The Howa has a 3-position safety – forward FIRE, middle SAFE with bolt operation and rear SAFE bolt locked. It’s located rear/right of the action and is easy to operate with the firing hand thumb with not a lot of disturbance to the shooting position.

The barrel is not floated and the flexible nature of the forend means it can come up and touch it, so be aware of this on and off a bipod. Though the Hogue is a tough and practical design, I would be tempted to go with either the in-house laminate T/H sporter or varmint or the Bell & Carlson fibreglass unit with alloy bedding block, which has a wide/deep barrel channel; better suited to this rifles dimensions. But as part of the package the Hogue is well priced and it might be what you like.

Apart from a couple of minor niggles I reckon this is a good rifle, scope and accessory package. This one is set up in 243 Win. But if you don’t fancy that then just use the Dream it, Build It programme to make your own special system.