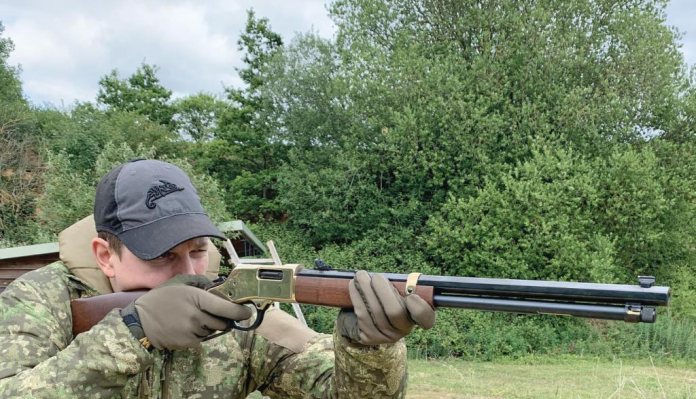 When it comes to American firearms history, Henry is a significant name. In 1860 they patented the first practical lever-action (LA), a rifle, which quickly became popular with the military and civilian users. They were later acquired by Winchester and following a few modifications became the 1866 and further morphed into the 1873 and 1876 and as they say, the rest is history. Today the centrefire (pistol calibre) options are particularly popular amongst the Gallery Rifle crowd and the new Henry Repeating Arms Company manufactures a model that meets their needs. Let’s check it out!

Their centrefire lever-action bares the unique name of ‘Big Boy’. It is available in a wide selection of different finishes and styles including Steel, Silver, Steel All-Weather and Case-Hardened finishes. There is even a large loop carbine version. The calibre options include .357 Mag/.38 Spl, .44 Mag/.44 Spl and .45 Colt. Distributors Viking Arms sent me a Classic version featuring American walnut furniture and an eye-catching polished, hardened brass receiver, butt plate and barrel band. It came chambered in .357, which is without doubt, the most popular choice in the UK because of its ability to run .38 Spl ammunition or full power Magnum loads. Factory ammo is affordable and widely available, while low-cost brass cases, powder, cast lead and jacketed bullets makes reloading the more cost-effective option.

Initial inspection shows a heavy and solid design, as the gun weighs in at 8.68 lbs with most of this coming from the substantial 20” octagonal, blued steel barrel. It has a diameter of 21mm and a right-hand twist rate of 1-16”. The brass receiver is closed-topped and the ejection port 1.7” long and located on the right-hand side. Locking is similar to the Marlin 1894 with the round bolt being engaged at the rear by a rising lug. It is important to pay attention to what you are doing as the hammer only offers a full cock position and there’s no separate safety catch. However, it does feature a transfer bar, which is designed to ensure the rifle can only fire once it is fully cocked and the trigger pulled. This protects the user if say the hammer was accidentally released as it is being cocked.

In addition to the action and barrel band, the butt plate is also brass, with the hammer, operating lever and trigger blade blued as is the barrel and mag tube. Sights consist of a semibuckhorn, elevator wedge at the rear, which is attached via two screws in a dovetail slot. Range is changed by sliding the wedge forward/ back. Finer adjustment involves loosening a screw and moving the white diamond insert up/down in the protective wings of the buckhorn. Windage requires loosening a set screw and gently tapping the unit left/ right. The brass-tipped front blade also sits in a dovetail.

No doubt due to popular demand, the receiver is drilled and tapped to accept a Picatinny/Weaver scope mount. So, allowing the use of an optic, with low power, compact variable scopes and red dots being favourite. After all, not everyone can shoot with iron sights!

There is no, Hall-type loading gate on the side of the action like those found on Winchester and Marlin designs. Instead, the Big Boy is fitted with a frontloading system. It consists of a fixed steel outer with a removable brass inner tube that contains the spring and follower. It can be filled either from the front or the loading port underneath a few inches back. Simply rotate/unlatch the knurled end of the brass spring/follower and pull it out. Capacity is generous at 10 in .357 or 11 in .38 Spl. Just slide the ammunition (base first) until the tube is full to the level of the port.

This system will not suit everyone, as it is not suitable for topping up like a side gate. However, it is a reliable method and loading time from empty to full is about the same. Unloading from the front is faster, but you must maintain muzzle awareness! It is important to keep the barrel at a shallow angle when loading and don’t hold the muzzle upright and drop the ammo down, as one high primer could cause a detonation.

At the time of the test, sourcing ammunition was impossible due to COVID-19, as a result, I had to learn how to reload straight walled cases which was an enjoyable experience. Thanks to Henry Krank & Co, for supplying Lee dies, PPU .357 brass and small rifle primers, Sierra 158-grain jacketed soft point (JSP) bullets and Ramshot Enforcer pistol powder. I loaded up using 12.5-grains of Enforcer, which gave an average velocity of 1389fps and 677 ft/lbs of energy. Kranks can also supply, 158-grain, hard cast lead bullets, which are more cost effective and well suited too.

Testing started at 25 yards to get used to the sights and I achieved a 1.45” group without much effort, followed by a 3.23” cluster at 50 yards. Allin- all a clear indicator of potential accuracy if I were to do some proper load development. At 110 yards groups were the size of a small dinner plate, the limiting factor here, clearly being the iron sights! With a scope fitted accuracy would improve significantly.

During use, operation was reliable with the .357 cases as long as I operated the action with intent. Unfortunately, I did not have any .38 Spl to try, but most shooters stick with downloaded .357 anyway. By doing this they avoid a carbon ring that can build up in the chamber from regular use of the shorter case and get more reliable feed.

I really enjoyed testing the Henry, the brass look and loading method comes down to personal preference but adds a bit of character. It is a particularly enjoyable rifle to shoot, is well made, finished and has a substantial feeling to it, though I found the lever loop a little on the small side, leaving minimal room for a gloved hand. Overall, it had a pretty good trigger for a firearm of this type and offered good performance, so smiles all round!