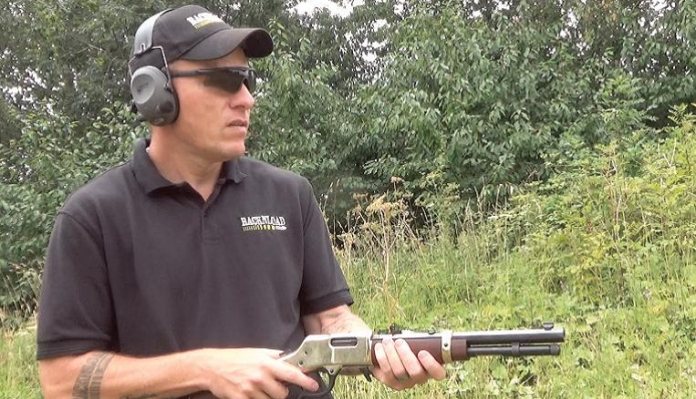 It’s not very often that my mouth drops open when I first see a slightly ‘different’ gun but holy cow! (see what I did there!) the Henry Mare’s Leg certainly made my chin hit the floor! Now, I’m not really a fan of lever action rifles, well not a super fan anyway, but this thing made me smile from ear to ear! Let’s take a closer look at this stumpy little thing then.

Now, before you ask, yes, it is UK legal, even though it looks somewhat, dare I say, ‘sawn off’. It is basically a cut-down version of a Henry rifle but the Mare’s Leg was the name given to a customised, shortened rifle used by Steve McQueen’s character on the television series ‘Wanted Dead or Alive’ (1958-1961). McQueen’s character was named Josh Randall, and the gun has also been referred to as a Winchester Randall, or a Randall Special. ‘Mare’s Leg’ is now the name for a Winchester model 1892 with a shortened barrel and stock and oh my days does this thing seem short, in fact, when I received this test gun that is chambered in .357 mag, I was wondering how exactly I should hold it when shooting! As you can see, the stock is a little short to put in the shoulder and it does not exactly have pistol ergonomics. But interestingly, the Mares Leg can be holstered!

So, going from the stock end then, it does looks a little amputated below the ‘knee’, if that makes sense, but Henry have done a nice job of it with the brass butt plate. The bit of wood that you do have is walnut, as is the forend. The pistol grip is classic Henry (straight) and has brass top and bottom where you would grip your hand around. This is also where the stock is fixed to the receiver. The solid brass receiver itself is beautifully polished and really is premium quality and there are no markings on it at all. On the right-hand side is the breach/ ejection port and on the other side is a saddle ring. Interestingly, the top of the receiver has been tapped to take a rail for an optic but that said, this is, after all, a Henry rifle that has been cut down! Moving on to the forend, like I mentioned, it is in beautiful walnut with a polished brass barrel band to finish it off nicely. The forend wood is good and thick with no weak points, as this is always something that I like to look for, especially at the forend of any gun, be it a firearm or an airgun. The octagonal barrel is blued to the highest standard and has ‘Henry Arms’ stamped on one side, with the calibre on the other, both of which are coloured in gold to match all of that shiny brass that the Mare’s Leg is so beautifully draped in.

The iron sights are really good and the rear, semi-buckhorn unit, is adjustable for both windage and elevation. The front is a fixed post with a gold bead on the top.

Now, the Mare’s Leg is one of those guns that is just as much fun to load, as it is to shoot. To load it and, in this case, with it being chambered in .357 mag, has a 5-round tubular magazine. You have to push and twist the knurled knob at the end of the mag tube and pull the rod until you expose the cartridge-shaped hole just in front of the forend. By the way, you need to be holding the Henry upside down at this point! Then, it’s just a case of loading rounds. Once they are all in, five in this case, all you have to do is push the magazine loading rod back in to place and twist to lock it in position.

Loading and cocking is very smooth and easy using the lever loop. Swing the lever all the way open and then close back up to chamber a round and, it is worth noting, that this process is silky smooth and very solid. The hammer is then cocked and you are good to go. This is where it gets interesting, unless you are shooting off a bench. As I said, this Henry is not the most ergonomic of firearms but, to be honest, I think shooting it if a bench will give you the best on-paper results! Shooting it standing up though proves a little more challenging. It’s safe to say that you cannot shoot it like a pistol either. But I did try (under safe controlled conditions) shooting it from the hip at a steel gong that I had it out at 25-yards! Not recommended, as your club would not be impressed and plus it’s not very accurate shooting it this way, although it did make me smile – just a little! Like I said though, benching the Mare’s Leg is most likely going to be the only way to shoot it at your club, so bare that in mind.

So, there you have it, basically a shorty version of a Henry rifle that I think could certainly raise some eyebrows at the range. I think a short barrelled version with a full stock may be a little more practical as far as shootability goes but the Mare’s Leg as it is, is definitely fun, if not a bit different to shoot! Safe shooting!