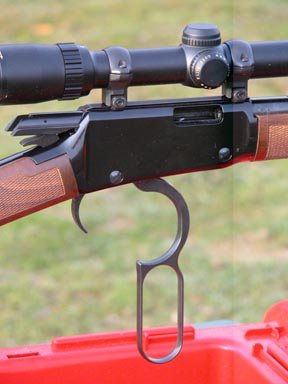 As a hunter I don’t have a lot of use for traditional lever-action rifles. Guns typified by the Marlin 1894 or Winchester 94, though undoubted classics don’t really seem to fit in with the UK scene that well. So it was with some reluctance that I agreed to look at the Henry lever-action rimfire in 17 HMR.

The .17” calibre, Hornady Magnum Rimfire (HMR) cartridge took the world by storm when it appeared a few years ago and quite rightly so as it offered a flat-shooting higher speed alternative to the 22 Winchester Magnum Rimfire (WMR). Producing 2550 fps with the original 17-grain V-MAX load and 2350 fps with the heavier 20-grain XTP bullet, it has near replaced both the 22 Long Rifle and WMR for many of us. And it also seems to be innately accurate too!

For me and also the majority of British small game hunters, a bolt-action HMR is by far the most common and practical design. And it seems that just about every manufacturer has made something chambered in 17 HMR. Personally I use a Ruger 77/17 All-Weather, with its cut-down 20.5 barrel and replacement trigger the gun can easily hold ½” at 100 yards and has accounted for cart loads of rabbits and hares and even a few close range foxes. And its 9-round magazine gives it a good edge on capacity too, certainly when compared to the opposition.

And to that list we must now include Henry Repeating Arms Co’s Varmint Express. A traditional looking lever-action, rimfire rifle based on the old Winchester 94/22, as are the rest of their products. The design is notable by the fact it does not come with iron sights and though showing a straight hand butt has a large comb, which does look odd for what is a classic design. So it’s plain to see that the rifle was built for scope use only, which I suppose is logical given the ability of the 17 HMR cartridge.

My first impression goes to the general build with what appears to be a nicely put together rifle. The furniture is a reasonable grade of walnut with well cut panels of chequering on grip and forend. The receiver is black-anodised aluminium alloy, with the barrel, magazine, lever and hammer being blued.  The plastic barrel band however, is a bit naff looking! But apart from that wood to metal fit is good, the action smooth and the whole thing comes together well.

Unlike centrefire lever-action rifles, which load through a gate in the side of the receiver, the Henry’s under barrel, tube magazine fills from the front. This is accomplished by a brass, pull-out tube that contains both spring and follower. This is retained by a bayonet lug locking system and is pulled forward to expose the loading port. Rounds are dropped into the mag tube (base first) and when full the follower is slid back and re-locked. As you can doubtless imagine the process is a lot slower than removing an empty box-type magazine and fitting a full one. But we are dealing with a classic design here.

Henry quote the capacity as 11-rounds, I found getting 12 in was not a problem. In terms of payload the Varmint Express offers three more than the Ruger and at least 60% more than any other 17 HMR rifle currently available. So what you lose in practicality with a fixed magazine, you more than make up for in capacity.

Typical of the build there’s no separate safety catch, though the external hammer has a stand-off position (half cock) that stops it contacting the tail of the firing pin. This reduces the chance of a slam fire if the rifle were dropped. But apart from that, if you want to lower the hammer on a loaded chamber then it has to be done by hand and carefully too. In the field I found it better to carry it at half cock then thumb it back when I wanted to fire.

Though lacking iron sights the Henry shows an integral ½” dovetail on top of the receiver, so no problems scoping it up. I fitted the new Bushnell 3-9 X 40 Elite with ballistic reticule in a set of CZ claw mounts. However, I was not sure what the two threaded holes on the top of the barrel re-enforce were for. All was revealed when I went on their website as it explained that the rifle was supplied with its own base. Opening the box showed this to be the case – that’ll teach me for not looking properly.

This consists of a long, 1” dovetail with a mounting block at the front, two screws are supplied that attach it to the barrel and gives it quite a high position. Looking at the system posed the question - why didn’t Henry simply screw and tap the top of the receiver and provide an optional 1” dovetail section, as Remington do with their 597 semi-auto? This would also do away with the need to raise the butt comb too, as the scope mounting height would be lower.

With the rifle sorted I got down to some range testing. I used Hornady’s 20-grain XTP ammunition, which is a weight I favour when shooting for the pot, as it penetrates better, hits harder and is less destructive on meat. Regrettably the build precludes fitting a bipod, if that’s your thing, as there’s no where to put a QD stud up front to fit one. The trigger was not too bad, with a tiny bit of creep it broke at a crisp 4 lbs. The action proved smooth and reliable with no feed or ejection problems at all. And this is one area where a lever-action mechanism scores over a bolt-action as you can maintain your firing position and roll off your shots quickly.

Supported at 100 yards the Henry was producing 1” groups, not bad but also not amazing for an HMR rifle, as all the bolt-actions I have tried will do sub one inch without any problems. I put some of this down to the trigger and also the fact the gun is quite light and I did find it a bit twitchy to use. But in fairness I find it harder to put up a decent group when compared to having to hit a single mark - for example a rabbit’s head. So perhaps comments on accuracy potential are a little academic. Suffice to say I would be happy taking the Henry out to bust small game and feel competent with its ability. Another indication of its potential is at the muzzle. Concave it shows an even and concentric blast markings around the bore that indicates the factory have crowned it properly.

Now to the almost mandatory question for any rimfire hunting rifle – how does it moderate? Well in the case of the Varmint Express – not very well, as a look at the magazine that sits flush under the barrel will show that with a can up front you can’t remove the follower to access the loading port. Also there’s not a lot of barrel left to get a thread on either. In the US market this is not an issue as they cannot own silencers of any type, but in the UK it will be seen as a definite disadvantage.

One semi solution would be to get it threaded and then load-up, screw on the can and shoot until empty, then remove it to reload then put it on again. Hardly elegant but at least you could keep the rifle quite. And with its 12-round capacity a slightly more workable solution.

There’s nothing wrong with the Henry Varmint Express, as it’s well made, potentially accurate and easy to use. However, and like all lever-action rimfires of this type, the under barrel magazine system is slow to load and also precludes the easy use of a moderator.

When selecting rifles like the Henry you must bear these things in mind and if you can live without a moderator then I reckon it will make a good small game tool.