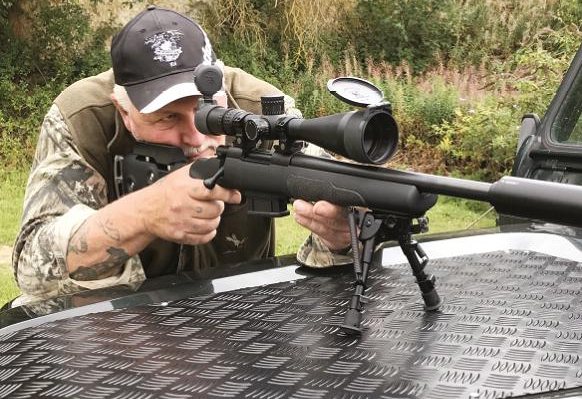 One rifle manufacturer that has always impressed me for both price and potential is Howa. My first introduction to their Model 1500 many years ago was their 223 Rem Varmint package. With a thumbhole laminate stock, medium/ heavy, 22”, 1-9” twist barrel, ready threaded for a moderator, at around £700 it was an absolute bargain. Time and price moves on, but I rather fancied seeing what they now offer and importers Highland Outdoors sent me down a 22-250 Rem version.

Opening the box revealed a short, 20”, heavy, 1 in 12” twist barrel showing a #6 profile and .825” in diameter, threaded 5/8 x 18 UNF. It occurred to me that this length is hardly going to get the best out of the old 22-250, but researching Highland’s website showed they also offer 22 and 24” options. Frankly I’d go for the 24”; purely for ballistic efficiency, though we Brits do seem to have a predilection for stumpy barrels, which does make handling from a truck easier; especially with a moddy fitted. Just how much difference the 20” would make would be determined by ammo selection and the chronograph!

The biggest difference to the original Varmint is the fact it came fitted in Grodas Rifle Stock’s (GRS) Berserk furniture. Based on their successful Sporter/Varmint laminate model this one is made from 25% fibreglass reinforced DuPont Zytel. The forend is 5% slimmer, which offers a better supported hold; the weight is reduced to 1.15Kg compared to the 1.38Kg of the new laminate Sporter for the same Howa 1500 short action inlet. Length of pull (LOP) and comb/ cheekpiece are adjustable by larger SpeedLok buttons with LOP going from 33.5 – 36.5 cms and a LimbSaver recoil pad. The forend and grip feature textured rubber gripping surfaces.

Flush-fit, cup QD sling sockets are fitted along with a QD stud for a Harris-style bipod. The underside of the butt has been lengthened so it works better with rear bags etc. The most notable aspect of all GRS furniture is the scalloped pistol grip with a 6° out turn angle. In use this positions the firing hand near perfectly and keeps the wrist straighter for a more comfortable and natural position. Inspection showed the action void is pillar-bedded, with GRS using what looks like nylon as opposed to the more usual aluminium.

In terms of feed the standard 1500 has a top-loading, hinged floor plate magazine system with a 5-round capacity. However, you can opt for the ATI Magazine Floor Plate Conversion Kit, which is available for most popular makes of rifle. Made of a black polymer it replaces the floor plate and offers an easy fit feed system with integral trigger guard. You get two magazine options, either a 5 or 10-rounder.

Highland’s website shows the choice of stainless steel or blued (carbon steel) barrelled actions in the lengths quoted. Also a wide choice of stocks from basic plastic and rubber from Hogue through laminate thumbhole and other types, Bell & Carlson, Black Hawk tactical designs and the laminate and polymer GRS Sporter Adjustable, Adjustable Hunter and Berserk units.

Choices do not stop there, with two fullbore moderator brands; aimSport and Highland’s own Sonic series. In this case I was sent the larger diameter Sonic 45 (up to 6mm), which is a multi-baffle design in a reflex (over-barrel) build. These come with two C-spanners so the individual baffles can be stripped down for cleaning and a syringe of anti-seize fluid to stop the threads binding.

Highland also distributes Nikko Stirling optics supplied one of their NS Diamond Illuminated 3-12x56 scope with their Dead Hold reticle with QD mounts and bases (also Nikko Stirling badged). As can be seen it’s a 100% in-house shop from rifle action, furniture, sound suppression and optics. Also included was one of their Harris BRS bipod copies – the Webley Pro-Tilt 6-9”.

Buying the components separately means you can mix and match as required to suit your need or budget. For example the Berserk stock costs £410.99, compared to the Adjustable Sporter or Hunter at £599.99 and £644.99 respectively. Equally so the barrelled actions in 22-250 Rem, the 22” Cerakote –H finished unit costs £782.99, whereas the 20”, heavy barrelled blued version is £654.99. Given the barrel profile stock prices go from Hogue Suregrip rubber over-moulded at £91.99, to an Howa HCR chassis system fully adjustable unit at £878.99 with something like the Bell & Carlson Medallist, fibreglass with aluminium bedding block and forend channel to suit the varmint profile at £407.99.

Though I rate the GRS laminate Adjustable Sporter and the B&C Medallist, Howa also offers a range of walnut and laminate furniture too. Perhaps one of my favourites is their Thumbhole Laminated Short Action Varmint Weight in Pepper (that’s black and grey). This offer a nice compromise to the GRS line and at £305.99 is well priced for what it is. Actions drop in and shoot well, but I’d get it pillar and synthetic bedded too!

Given Highland Outdoors are trade only, you can go on their website and select how you want your 1500 set up as to calibre, spec and furniture and order it through your local associated dealer. Oddly enough their website shows only one complete rifle - the Alpine in a Cerakote gun metal finish. With a Bansner High Tech Fibreglass Legendary Arms Works green and black pepper stock that is glass bedded with quoted sub-MOA accuracy.

My tester came with the floor plate mag fitted and it’s a matter of minutes to unscrew the 2 x T25 Torx screws and replace it with the box mag conversion kit and 5-round magazine. Then fit up the scope bases; don’t forget you’ll need a small, slot head blade to undo the brass blanking screws in the receiver bridges!

The barrelled 20” varmint action and Berserk stock weigh 8.06 lbs, but when the gun is fully bombed up – bipod, scope and moddy it tips the scale around 11 lbs, which is heavy enough. But then again this is more a ‘sit and shoot build’ and not a walk about rifle! The fully adjustable butt with its big SpeedLok buttons is very easy to set up and until you’ve tried that 6° angled out pistol grip you don’t know what you’ve been missing. As it just positions your firing hand near perfectly for a comfortable and natural hold!

Ammo went to two choices; both factory and rather dictated by the standard 1-12” rifling twist, however, I wanted fast and flat so was happy enough! First up Hornady 55-grain V-MAX, next Winchester’s 50-grain Ballistic Silver Tip (BST) in a nickel case. Hornady quotes a factory figure of 3680 fps from a 24” test barrel. The BST is quoted at an impressive 3810 fps, which is quick.

At first I had a nightmare getting the rifle zeroed, as it just did not want to play, I tried it with and without the moddy, checked all the screws. Then I remembered the first time I tested the Berserk stock I had the same problem, which I traced to ‘over-tension’ of the action screws. The nylon pillars were over compressed and causing the problem. Slacking them off a ½-turn the Varmint started shooting as I thought it should. Both loads were turning in ½” groups; excellent, but!

The box mag conversion fed well, but is perhaps not that essential for a varmint rifle, though is more convenient than pushing rounds in the top. One thing to note with the ATI unit is they have placed the mag release lever at the front, where it’s totally unprotected and easily accidently operated! The standard trigger broke crisp and clean at around 4 lbs, could have been lighter but I have no complainants

Barrel length aside, this build of the Howa 1500 does offer a very shootable and potentially accurate package. Like I said you can pick and mix what you want to build a near perfect rifle for any need!