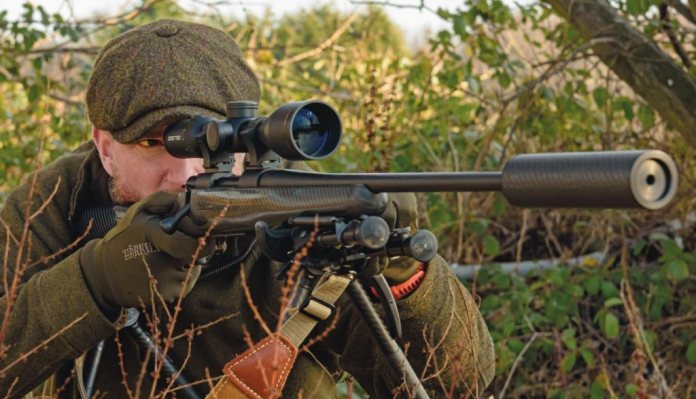 The Legacy Sports website doesn’t divulge masses of manufacturing detail, so from what I can observe through disassembly and inspection of the stock, it’s a clamshell wrap with ‘foam’core filler. The receiver is held captive by twin T30 Torx screws spanning the underside floorplate magazine. Removal shows cleanly cut threads with minimal friction and when released, the flat-bottomed action shows a tapered recoil lug with a central threaded hole for the action screw, with the rear maintaining tension at the back of the tang. Howa’s HACT 2-stage trigger operates with a crisp 998-gram break. This is adjustable, yet sealed with thread lock to discourage the procedure. Inspection of the stock’s inlet shows neat machining of the core that is wrapped by the carbon skins for stiffness.

The floorplate magazine fits snugly underneath, with an internal folded steel mag box liner that’s snugly slotted through the stock and nestled into the receiver’s underside. This needs a wriggle when re-assembling to assure correct location, followed by correctly re-tensioning the action screws which spin freely to a firm stop as the action physically meets its inlet. It is appealing to feel the torque immediately rise and then ‘click’as it peaks, without mushiness and bending of the action meeting inlet surfaces. There appears to be no movement when testing bedding stress, indicating a stress-free fit. However, the barrel itself does not fully free float.

Howa still offers an MOA assurance as well as a lifetime warranty with their rifles. Testing confirmed the combination of this unstressed (yet contact fit barrel) with a very stiff stock seemed to give no problems for the first three shots.

The stock’s underside, butt and grip show its central seam finished flat where the carbon meets. The two halves of a clamshell have their flanges bonded together before filling, which when hardened is machined to create the inlet. You get the delightful carbon fibre weave with a polished smooth finish, ‘flattened’ slightly to minimise reflectivity. No chequering or similar stippled inlays are added to the forend or open radius grip. I didn’t have any tactile issues, but this is never going to be quite as assured as one of the former finish types.

Secure sling studs on the forend and butt are fitted. The Limbsaver butt pad is 18mm thick, without excess bulk into the shoulder pocket and not spongy at all. .243 recoil is no great test but the handling character was very mild. I have no doubts it would transfer well into the larger calibres.

A relatively tall comb shows a slim upper radius to fit under the cheekbone without displacing the jaw, and the internal filling minimised any undesirable recoil harmonics and noise. You can keep your head/eyes securely located to maintain sight picture through recoil.

Howa’s long, short and mini action lengths guarantee an appropriate fit for your chosen cartridge and the barrel of this .243 shows a 17mm diameter and is threaded ½”x20. Highland supplied an RCC Carbon 44 moderator and the similar materials complemented the rifle. The barrel shows a matte blued/black finish with no specific coatings.

The rifle features a twin lug, push-feed bolt and the 62mm bolt handle shows an 18.5mm teardrop tip that lifts 90º to cock and unlock the action. Primary extraction is plentiful and travel is relatively smooth.

Rounds fed smoothly from the floorplate, plus all extraction and ejection duties were performed faultlessly by the right-side claw and upper-left sprung plunger. The 17.2mm diameter bolt runs along twin laterally broached raceways within the receiver. A bolt stop actuator sits to the left of the tang, behind the rear action bridge, whose threaded holes are Remington 700 compatible. Howa supply two Weaver type bases along with the rifle, as well as a padded rifle slip.

The trigger blade is 6mm wide with tactile grooves and I find the HACT triggers, regardless of weight, well-timed and easily judged for confident shooting. The safety catch is forward for FIRE, centre position for SAFE with locked trigger and rearward for SAFE with bolt lock. It’s a folded steel lever that’s hard to nudge accidentally, tactile in use and quiet.

At 100m, I ran through several ammunition types suited for varied .243 usage. After a run in and zero, the first serious targets were tackled with 95-grain Winchester Extreme Point, which gave satisfactory energy but didn’t meet the MOA accuracy standard. After cleaning and moving to familiar 100-grain soft-nosed Hornady Interlocks, the magic minute was reliably achieved. This exposed lead core bullet remains modest in overall length to stay within the realms of stability for the Howa’s 10” twist rate barrel. Performance is just as variable around temperature variations as it is ammo brands when twist rate stability is borderline. Technically, muzzle energy at 1648 ftlbs is weak from a legal standpoint in some regions though, and a factor to consider with shorter barrelled 243s. I was a little surprised as this isn’t usually a problem on a 22” .243 tube, but on a cold damp day, perhaps not the tested and suggested environment the ammunition was developed in?

The 90-grain ELD-X is perfect .243 territory for many UK shooters and here, performed delightfully with reducing group sizes on target, acceptable velocity and energy as we draw towards the middle ground for bullet weight in 243. Note, very few ammunition velocity measurements achieve what is stated on the box, regardless of chambering and it’s not a huge worry factor but can consider every barrel somewhat unique, including test barrels with whatever twist rate they have and specific rifling tolerances which may or may not create more pressure and speed.

I personally like 75s for foxing in .243 and the SST from Hornady was the star of the show, producing a 0.45 MOA group at 100m (9% further than 100 yards remember). Velocity was 3185 FPS and it shoots well over easily measured longer ranges, better resisting wind for hard to read night-time foxing forays at just under 1700 ft-lbs.

I tried some ‘light for calibre’ 55-grain Sako rounds, which performed well enough but given the overbore cartridge dimensions for a light 6mm bullet, highlighted just how much velocity can be advertised yet not achieved in the real world from shorter tubes. If you want to start precisely computing better ballistic solutions to test, you should always chronograph ammunition rather than just believe the box. I experienced no problems with any ammunition type with regards to chambering, headspace, extraction or ejection.

The non-floating barrel didn’t bother me and I shot the rifle freehand, bipod mounted and from sticks. I found that so long as it was handled with reasonable care and not brutally, it never caused a point of impact shift issue. Cleaning showed up no concerns with excessive coppering smeared into the rifling or fragmentation, and a borescope inspection had shown a barrel of above-average manufacturing standard. So, no excessive machining marks to strip or retain copper. The crown was precise and sharp.

Given the lightweight build, the gun definitely seemed confident to carry, with a central balance point. It was fast to twirl up onto the sticks from the sling, yet never too floaty or delicate when aimed. The barrel profile complemented the stock ergonomics and physical mass.

Carbon fibre is a superb material for stocks and well worth spending the money on to save weight. I’m wary of low-cost carbon fibre barrels, whose weight might seem attractive, but performance is yet to truly convince me (until the big £££ come into play), so I see carbon stocks, whose price is always falling, as the logical way forward if the mass is the considered factor. It’s also noticeable how the inherent stiffness, without bulk, avoids problems with forend movement.

I think to sum up the gun, it’s a solid, honest, reliable choice without excessive hype. There are no specifically creative or ground-breaking hidden gems in terms of engineering creativity, but on the other hand, no demons brushed under the carpet, out of view within the stock, which here, looks good on another Howa that can be built modularly, at modest cost to suit your needs. Perhaps a little more inlaid texture grip on the stock would be an addition, but it never seemed to cause problems for me. There isn’t a palm swell, so it’s totally ambidextrous, which I like in a sporting rifle. The length of pull is quite short but you can add spacers. Doing so would not make the gun appear out of proportion. The butt’s overall shape is well profiled to the action, barrel and forend for streamlined aesthetics.