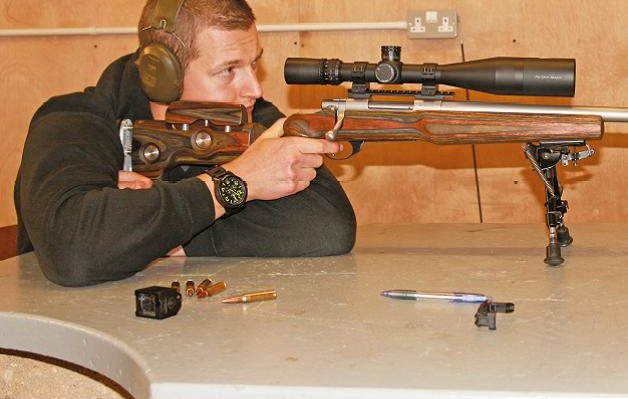 When it comes down to good, old fashioned value for money in a rifle then I’d stick my neck out and say that you can’t beat a Howa 1500. But it’s not just about money as what’s on offer is most impressive too and available in both short and long action options as well as barrel and model choices.

Howas are imported and distributed in the UK by Highland Outdoors and as well as the individual models they offers stocks from Hogue, Howa themselves, Bell & Carlson, Knox and also GRS (Grodas Rifle Stocks) of Norway. Add to this the option of blued or stainless finishes and even box magazine conversion kits for the short action calibres to. Highland also offers total packages that can come complete with a Nikko Stirling scope, mounts, and their Sonic moderators along with your choice of stock. One of the models that has always impressed me is the Varmint.

I first tested a 223 Rem version many years ago and it was a good one – 22” heavy barrel, 1-12” twist, threaded ½ x 20 UNF and the action dropped into a very nice Howa thumbhole (T/H) stock with heavy free-float forend and ventilation slots. The build is a bit like a Remington Model 700 crossed with a Winchester Model 70 and as standard comes with a top-loading, bottom dump, floor plate magazine system. The bolt handle angles back slightly and features a 3-position safety at the rear right of the action – forward - FIRE, middle - SAFE with bolt operation and fully rearwards FULL SAFE (bolt locked).

Back then I think the price of the Varmint was £699 and for a 223 that shot easy ½” groups that was a stone cold bargain. The yard stick at that time was Remington’s 700 Varmint series typified by the VSSF (varmint synthetic stainless fluted), which as I recall cost at least £1200. In the USA Howa cleaned up with many comments on the various web sites and forums to the effect of; why should I buy Remington when the Howa is just as good and a whole lot cheaper; I could not argue with that either!

The rifle on test is another Varmint but just a little special. The stainless action shows a heavy, plain 24” barrel threaded ½ x 20 UNF chambered in 308 Winchester. The real difference is the fact it comes from Highland Outdoors in a GRS stock, which really is a fine piece of design and engineering as well shall see! The model here is the Sporter Varmint though there are a number of other options; this one does seem to be the most popular in the UK though. Their Adjustable Hunting is very similar with just a bit of a change in the butt layout. They are both full sized builds and can add a bit of weight to the rifle, GRS has this covered as they offer both models in what they call the Decima option which reduces the weight and dimension by 10% overall.

The real beauty of the GRS is that it’s fully adjustable. Made of high quality Stratoboard laminate it’s available in a choice of colours, the one on test is in what they call their Green Mountain Camo. I have one of these on my custom 6.5 Creedmoor, which uses a Weatherby Vanguard action.

The butt is adjustable for length of pull (LOP) by a large press button in the side and will cater for most people large or small. It’s finished off with a Limb Saver recoil pad, optional is a sliding plate so you can fine tune your shoulder position as to pad height. The comb/cheek piece uses the same push button method too. Suffice to say it’s really easy to set up and does improve your shooting position no end.

But we are not finished yet. The underside of the butt is cut out to form a grasping hook at the rear, which is an ideal support when shooting off a bipod or bag. Something else you soon learn to appreciate is the off-set and scalloped out pistol grip that rotates your hand by 6° from vertical. It may not sound much but it just de-stresses your firing hand position. The forend is full but gently tapered and is free-floated for most barrel diameters and the action inlet is 100% finished so your barrelled/action can drop straight in.

Though I had my Sport Varmint bedded, this example was not and it shot well enough. Another option worth consideration is the box magazine conversion kit. Normally this sort of extra will set you back a good few hundred quid, but the one Highland does is made of polymer as are the 5 & 10-shot magazine options. OK it’s not steel or alloy but I have never had any issues with feed or function and either magazine capacity is £54.99 with the replacement floor plate being £44.99 so sub-£100, which is well under what a metal set-up would cost! I have been using mine for around 5-years with no problems!

The one thing I would say about this kit is the manufacture has placed the release catch forward and it’s not protected/covered in any way. One problem I found if you are shooting off a rail it’s easy enough to slide the rifle forward and inadvertently trip the catch. At the moment the conversion kit is only for short-action calibres. The magazine kit is better used on the range as the standard floor plate magazine is more than adequate for hunting!

The test rifle was loaned to me by a friend who fitted it up with a Night Force 3-15 x 56 scope in a Howa, one-piece rail and rings. Up front a Hardy Gen IIII moderator with a Harris BRS bipod underneath. He mainly uses it for hunting, but for the range test I used Hornady 168-grain A-MAX, which for a 308-type target round is hard to beat.

The GRS/Howa Varmint makes a very comfortable and stable shooting combination. Setting up LOP and head supports takes literally seconds and as you make your firing hand grip you can’t fail to appreciate the position offered. I think I could best describe it as a sort of thumbhole-type layout without the top strap on the cut out, such is the feel!

With what is a medium/heavy combination, recoil in 308 is comfortable, especially with the moderator fitted. Accuracy was good and with the standard trigger, which breaks pleasingly crisply at around 3-4 lbs the rifle was shooting an average of ¾”. Out of interest my Weatherby Vanguard is actually made by Howa so things like the stock inlet and magazine kit will fit either rifle.

With that in mind I fitted a Rifle Basixs drop-in for the Howa/Vanguard. There are two – WTHBY-1 is factory set at 2.5lbs and adjustable from 1.5-4 lbs and WTHBY-V (varmint) set at 14oz and adjustable from 12oz – 1.5 lbs. Fitting is simple and whatever you opt for it will make a difference!

This then is the beauty of the Howa as it’s such a popular rifle there are any number of accessories for it. Equally if you have a 1500 already you can buy the GRS stock from Highland as a separate item and fit it yourself or get it pillar and synthetic bedded by your gunsmith. Or if you don’t want to spend £529.99, which might be a bit much you could opt for one of Howa’s thumbhole stocks as you can get the Fajen-style which is dedicated for right handers or their Ambidextrous both costing around £250.

Regardless of what you do as can be seen the Howa 1500 is quite some rifle and has got you covered for most calibres and uses along with a load of accessories that will certainly improve the shootability of your rifle no end!