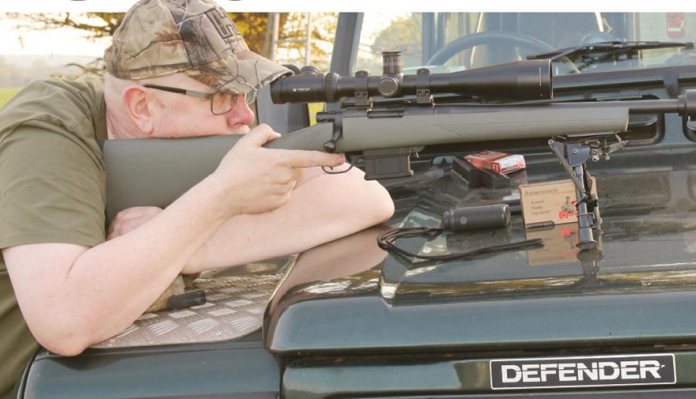 Generally speaking, there are three rifle action lengths - short, long and magnum, these basically cover cartridge overall lengths (COLs) up to; 308 Win (short) 30-06 (long) and 375 H&H (magnum). As can be imagined a lot of calibres will fit into these groups! A smaller sub group are those tailored for the shorter numbers such as 222/223 Rem, 6.5 Grendel and 7.62x39, which could be termed as ultra-short! As far as rifles go, CZ’s 527 is perhaps the most prolific, I have two - a 222 Rem and 6.5 Grendel; both custom builds! The 527 is a sweet little design, though a bit archaic, being to all intents and purposes a mini Mauser 98 action feeding from a 5-round, single-column, detachable box mag.

The obvious advantage is an ultra compact and light rifle that can still do the business, though saying that, the standard short action group can easily handle 223 Rem for example. But small can be both beautiful and efficient and there’s something sweet and handy about this build.

There’s little doubt that Howa’s 1500 represents a well built, shootable and affordable, modern bolt-action rifle! It’s nothing radical, being very much a Remington 700-style, with a twin lug bolt and 3-position, rolling safety rear/right of the action. Feed is from a top-loading, floor plate magazine system and to a degree has become the base for many customs conversions, as well as offering a plethora of out of the box options. So I was surprised to learn they have designed an ultra-short receiver specifically for 204 Ruger and 223 Rem, called the Mini Action!

Compared to their standard short-action it’s 12% shorter, with a commensurate bolt length, which means a shorter stroke and potentially faster cycling. There is a choice of 20 and 22” barrels in three contours; #1 lightweight, #2 standard and #6 heavy, on test was a standard 20”, though in 204 this tube offers a slightly heavier build due to the smaller bore size. Barrels we are told are made by drawing extruded tubes that are swaged, drawn and roll-levelled before cutting. Heat-treated, this method produces less stress and a straighter and more accurate end product.

Weighing around 5.5 lbs overall length is 39.5” with a 13.87” length of pull (LOP), just a tad short for me but no real problem either! Action and controls remain unchanged with the 3-position safety offering FIRE (forward), SAFE with bolt operation (middle) and SAFE bolt locked (rear). The trigger is a 2-stage unit and Howa has dispensed with the floor plate magazine system in favour of their box mag conversion kit, giving the Mini a generous, 10-round capacity.

The rifle comes pre-threaded and shows a Hogue, synthetic stock in a choice of olive drab/green, black and Krytek Highlander camo. The build is a sort of heavy sporter, though the forend is perhaps not as rigid as it could be! The light weight and compact build does, as I said before; make it nice and handy! Truth is, the CZ527 feels a bit cramped and clunky by comparison, whereas the Mini embodies all the modern build and layout of the standard 1500 with a smooth bolt-action and well positioned and easily operable controls, with one exception, which I will come to.

Ringing the changes a little, I was keen to try the 204 Ruger option, as it offers a flatshooting and potentially accurate small varmint round. Based on a necked down 222 Remington Magnum case, it offers more capacity than a comparable 223 Rem in a number of bullet weight options - 24, 32, 40 and 45-grains. Factory ammo is available from the likes of Hornady and reloading dies and components too. However, and please note; a .20” calibre is not even small deer legal in the UK, so must be confined to varminting etc, which it excels at, due to the high speeds it’s capable of achieving.

The two most popular weights in the UK are 32 and 40-grains, I had these two plus a Superformance, ultra-light, 24-grain NTX (non-lead ballistic tip) and a 45-grain soft tip, which is the heaviest, all supplied by Hornady. As well as some Remington 40-grain Accutip.

The Mini came with bases and rings, along with a 3-9x40 SIG Electro Optics scope. I however, chose to fit a Vortex 6-24 x 50 FFP, this higher spec would doubtless suit the varmint role better, with small targets at medium to longer ranges. Importers Highland Outdoors also included a Sonic 45 reflex moderator. They also offer a package deal with the rifle, mounts/rings, Nikko Stirling Panamax scope and moderator, which represents good value for money and an out of the box and ready to go bundle. The gun was shot off both bag and bipod and performed well, but I would have liked more choice on furniture. I would imagine that will soon happen given the amount there is for the standard auctioned 1500s as Hogue offers some effective designs. It might even be the case that GRS could adapt their 10% smaller Decima Sport/Varmint or Hunter furniture to suit, as they already do inlets for the standard Howa 1500.

It’s hard to fault the generic Howa 1500 action, as it’s solid and reliable with masses of shooting potential; however, I do have one niggle about the box mag conversion. It takes seconds to fit, requires no adjustment and feeds reliably and 10-rounds on gun is more than enough for any need! The issue is the position of the release catch, which is at the front and completely uncovered. The problem is when you pick a rifle up you tend to go for point of balance, which is around the magazine and it’s all too easy to inadvertently press the mag catch and drop the clip. Equally, if in a high seat, pushing the rifle forward on the gun rail can do the same. I have one on my 6.5 Creedmoor custom and am in the process of making a U-shaped protector to stop it happening. So just be aware and you should not have a problem!

Initial zeroing at 100m showed the rifle could shoot and was happy with all the loads/bullet weights! Of the four, the Mini preferred the 32-grain A-MAX and was shooting near cutting groups, the 40s were not far behind at ½”. The 45-grain SPs shot an inch and the 24-grain NTXs were just over the ½”. Velocity figures were interesting as follows:

In all cases, speeds were well down on the quoted factory results. Taking the Hornady 40-grain V-MAX as an example, they say it does 3900 fps, in 24-26” barrelled 204s I have shot in the past I’ve achieved speeds of around 3800 fps. Given the shorter 20” tube of the Mini it’s not surprising. Equally, the 45-grain SP load is slower than a comparable 50-grain 223. However, with the exception of the 45, you still have a flat shooting and accurate varminter, with the added advantage of it being in a very handy and shootable package. I’m happy to trade that against a true heavy barrelled varminter that is probably tipping the scale at 13 lbs + all-up weight.

As might be expected the rifle/cartridge combo is very well behaved, with minimum recoil disturbance either to the shooter or the view through the scope. So allowing you to easily see fall of shot and quarry and not lose appreciation of either! The action feeds reliably and smoothly and the drop mag makes loading and unloading easy, as does the 3-positon safety with its middle SAFE with bolt operation position. The trigger is adjustable but from the box my example broke at a pleasing 3 lbs, if this were my rifle I would probably drop it to 2 lbs for just that bit more finesse!

I elected to use the 32-grain V-MAX and 24-grain NTX loads and took the Mini out for some day time varminting. Typically no live targets. I also had some Allen Co reactive, polymer targets which allowed me to see how it performed at 400 yards. Again no dramas, as long as I read the wind properly. Out at 400 with the 32-grainer you are achieving 1924 fps and 263 ft/lbs which is about the same energy as a 17 HMR produces at the muzzle, so well up for dispatching rabbits to foxes and everything in between!

Overall, this is a sweet little rifle with a lot of potential and as a pure varminter I’d stick with the 204 Ruger option. Though the 223 logistically makes more sense, as its small deer legal too.