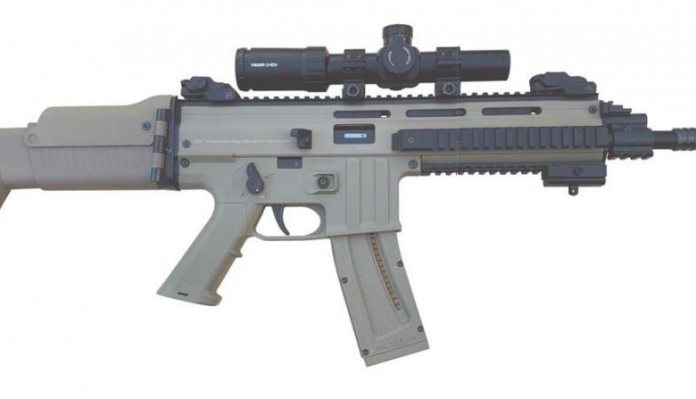 Regardless of their varying, tacticool looks, 22 rimfire, semiauto military lookalike rifles are similar under the skin. Perhaps the most fun and frustrating guns I’ve used; two aspects are paramount; accuracy and reliability. Some are capable of ½-inch @ 50-yards, others not, so I set a benchmark of an inch, which is acceptable, given their usage. However, it must be reliable, which is down to good ammo and regular cleaning.

In 2011, I was sent an ISSC MSR (Modern Sporting Rifle) Mk 22 for testing. Whereas most rifles are based on the M16/AR15, this one looked like the FN S.C.A.R. (Special Operations Forces Combat Assault Rifle). Although AR-like, it showed some original and practical features. Sadly, after 150-200-rounds it became a ‘jamamatic’, which was down to cleaning and design. Disassembly was not easy and long winded; most owners would not bother after such short shooting intervals. I consigned the Mk 22 to the ‘could do better pile’ and thought no more of it.

However, when Anschütz announced their new, semiauto, 22LR for ‘dynamic shooting’, the MSR RX 22 TM Precision, it turned out to be a modified MSR. With their reputation, I was very surprised when they decided to pick a rifle I considered hardly fit for purpose. However, with its new barrel, better trigger and unusual laminate stock, it was certainly better than the original. But it too swiftly faded from sight. Since that time, ISSC have been picked up and put down again by both Highland Outdoors and Range Right. So, I was a little surprised when I got a call from Oleg at FSU Connections, saying that he was selling ISSC Mk 22 MSRs. Now called the .22LR MK22 COMMANDO assault rifle, it’s available in a short barrelled version only.

The build shows an aluminium alloy upper receiver, with a polymer lower. The original is blocky looking with a lengthadjustable, side-folding butt and 2-two position comb. Controls are ambidextrous and AR15-like, with both safety and magazine release catches being dual-sided. The 15-inch upper receiver/forend shows a flat-top Picatinny rail, with three, shorter sections at 3, 6 and 9 o’clock, allowing accessory mounting. There’s a fourth, even shorter one under the barrel too.

The comb is a bit odd; this horseshoe moulding is controlled by a press button on the left. When down and combined with the medium height Picatinny rail and straightline butt layout, getting onto low-mounted optics is a bit of a squeeze on the cheek.

For testing, Oleg supplied a Paragon 1.2-6x24 compact scope with an inverted horseshoe with open BDC reticle, very much the right choice for a rifle of this type. With the comb up, your head is lifted about ½-inch, which requires some high mounts, so not a lot of use apart from NV!

The heel of the butt has provision for an ambi, QD sling swivel and there are sling loops front left and right, with a double set, rear right only. From the box, it came with 22-round magazine (one black the other desert tan to match the paint job) and it looks good. Also flipup sights, not quite Magpul MBUS, but good enough; if, like me, you like irons, an adjusting tool is also included.

The action is blow back, with the bolt running in a fixed cage bolted inside the receiver. Practical is the UCAS System (Universal Cocking Adaptation System). This allows the cocking handle to be positioned; forward, middle and rear, left or right.

It just pulls out and pushes in where you want it; for me, middle/left worked best, which allowed me to keep control of the gun with my right and cycle it with my supporting one.

Tube within a tube

Much like German Sport Gun (GSG) and Walther Tactical products, the barrel is actually a slim, steel, rifled liner within an outer tube to give it the look. Stability is achieved by a screwon muzzle brake that tensions it; from experience with these two brands, accuracy is not adversely affected. A ½ x 20 UNF adaptor is available, if you want to fit a moderator. Unlike the original model, with its 15-inch barrel the COMMANDO shows the minimum, UK legal length 12-inch tube with a rather large flash hider, which does give it some serious curb appeal; especially in its desert tan livery.

However, this compact build has its disadvantages, as the butt is permanently fixed in position, so it won’t fold, or for that matter reduce in length, so not to exceed the permitted minimum 12/24-inch lengths for a UKlegal Large Firearm. From recoil pad to muzzle it measures 29.25-inches, so 5.25-inches over the subscribed limit.

Feed is from a 22-round magazine (which will hold 24), with pull-down, side tabs to facilitate filling. Without doubt the best design for a hi-capacity, 22 LR magazine, as it’s quick, less tiring and allows you to easily position the case rims for 100% feed reliability; another essential for this sort of firearm. Useful is the magazine safety; if the mag is not in the rifle the trigger does not operate. There’s an automatic last round hold open too; always a bonus! However, there’s no external manual hold open/ release as you’d find on an AR15. Instead, you have to pull back and release the cocking handle to allow the bolt forward. You can however push your middle finger up into the right side of the mag well where you’ll feel a small metal tag, which, with the bolt held open, pushes up to lock it rearwards.

Although using the Paragon scope, I also added the new KonusPro 3-12x50 EVO in a Sportsmatch one-piece/ Picatinny mount, as I needed something with a bit more spec to properly determine accuracy. ISSC recommend high velocity (HV) ammo, however, I used a mixture, as I usually do.

Research on the internet shows a lot of comments about the Mk 22’s reliability problems along with fixes and I also had this first-hand from UK users too. However, this seems to be from rifles produced between 2011 and 2013, with mention now of later manufacture, Generation 2 models that purport to have sorted these issues. Although I’ve also seen latter posts saying that the Gen 2 guns have not totally solved things. FSU’s website says this: “All our MK-22 rifles come with 12 months’warranty and in the unlikely event of action parts failure, we always carry some spare parts including the whole bolt assembly. Also beware of cheap imports of old"1st generation”(2011-2013) rifles from the US — some of them may not feed properly causing regular jams.”

In use, the MSR looks a bit plasticky but handles easily enough. The 6-position cocking handle is practical, although the short/fixed LOP combined with the comb height is not ideal. Trigger pull was mushy but workable and broke around 4-5lbs, accuracy was around the inch at 50m, so good enough for government work.

Keeping any 22 semi clean is essential for reliable operation, as these look-a-likes get shot a lot and fast, so stripping is mandatory. It’s here that the MSR falls down, as everything is screwed or bolted in! The body pins do not immediately push out, as they are a doubleended, screw and shaft design that requires two, thin bladed screw drivers to remove.

With that off, two more Allen screws have to be taken off to remove the butt, then, once inside, you need to remove another to take out the prepackaged bolt assembly, which itself needs splitting to access all areas for a thorough cleaning. I feel that your average shooter is probably not going to do that after every range session! Plus, steel screws in and out plastic and alloy tends to exacerbate wear. I’d recommend some form of solvent spray to blast the gunk out and maybe a strip down at longer intervals.

My tester was FSU’s demo gun and had obviously had a good few rounds through it; although ISSC says high velocity ammo, I chose Remington Thunderbolt and Golden 22 HV and Subs, MagTech standard and HV and GECO SEMI-AUTO standard. Best performance came from the MagTech, GECO standards and Remy subs, with no real problems. The Thunderbolt caused occasional stoppages, as did the Golden, nothing you would not expect from a rifle like this. However, it did not like the MagTech HV, with feed stoppages, partial ejection with cases jamming the mech and even one round firing out of battery; this ammo was quite old.

In all, I put over 300-rounds through it and it proved reasonably reliable. Accuracy was within the permitted inch at 50-yards and it did well at 100 too. So, good enough for Action-type shooting and a far better rifle than the one I first tested in 2011. I do not like the comb, as even when down it’s too high and you have to mash your face into it to get onto the irons. With a scope, high mounts are recommended. Not my first choice, as I rate my Smith & Wesson 15/22 as one of the best out of the box rifles of this type, but it appears to work well and is certainly different.