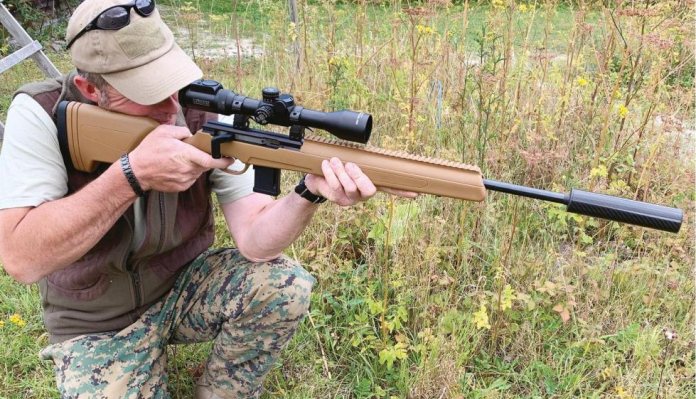 When Highland Outdoors picked up ISSC a few years ago, they had the Mk22 semi (FN S.C.A.R. look-a-like) and the intriguing, straight-pull SPA. It was a standard looking, rimfire sporter with a basic, plastic stock and aluminium receiver, feeding from a 10-round detachable box magazine, chambered in 17HMR. The action was a side-cocking toggle design and looked slick; however, it had serious problems in this calibre. It was on the very limit, as I soon discovered, with split cases, hard extraction and headspace issues. In the end, I gave up, as I honestly thought it would let go.

Pity, as it seemed to have lots of potential, but the execution lacked the ability to fulfil the dream. It was one of those; ‘what if’ moments I have when testing equipment; I reckon this might be better in 22 Long Rifle?

Highland did not wait too long in dumping the brand and I thought little more of ISSC, but they were still producing the Mk22 and the SPA in various guises. At IWA 2016 I saw what looked like a tiny Scout rifle on the Steyr Mannlicher stand and it was. Called the Scout RFR, it showed the smaller, yet distinctive stock shape of the original, less integral bipod. The action was an ISSC SPA, so I assumed they wanted a cheap rimfire based on one of their most notable products. Which would have an appeal, not only as a rimfire hunter and plinker, but also as a cross trainer, which the US market are mad on these days, much like Anschutz had done with the Mk22. Three years later and Steyr no longer showed this model in their portfolio. Favouring instead a Mk2 version of their Zephyr bolt-action, which is to all intents and purposes a CZ 455 action; hey, if it ain’t broke, don’t fix it!

This long preamble sets the scene for this month’s gun test, as the ISSC SPA has risen again, this time as the Scout SR Ultimate rifle I saw at IWA, but in 22 LR, from of all people FSU Connections, who mainly specialise in straight-pull AK-types and associated equipment. A quick search on the interweb showed that ISSC is still producing rifles and offers the SPA in a number of options and also calibres that include 17HMR and 22WMR; worrying.

Opening the box revealed a cool looking rifle; I owned a Steyr Scout in 243 Win many years ago and really liked it and to see that radical furniture style reproduced again was heartening. Chambered in 22 LR, I thought the SR might have just found the role it could do well in, as in this calibre it appeared to have a lot going for it. Most striking was the colour, which was a yellowy brown, they call Desert, ISSC also show it in black and O/D Green, although I don’t think FSU bring those two options in. The Ultimate title indicates the rifle comes with a survival package in the hollow butt including a sheath knife, wire saw, fire starter and torch. Mine had the knife and a para cord belt clip.

The Scout has a lot of ‘curb appeal’, as it looks and feels good in what is a sweet handling package. The 20” barrel is medium/heavy for a 22LR and threaded ½ x 20 UNF and came fitted with a carbon fibre covered, muzzle-mounted moderator (not included as standard). The stock moulding is near identical to the real Scout Rifle, although the individual, length of pull (LOP) spacers are cast in and nonfunctional. LOP to the rubber butt pad is a short 13.5”, but the high comb and scalloped ambidextrous pistol grip and hand-filling forend all contribute to feel and handling. There are two QD sling studs fitted front and rear, the latter also retains the butt pad, so you can access your survival gear.

The top section of the forend shows a 12.25” Picatinny rail, in keeping with the original concept of using a long eye relief scout-scope. This appears to free-fl oat the barrel to a degree, but not centrally. The side-cocking, straight-pull action uses a toggle system and here I noted the first improvement over the original I tested. The drop-down, L-shaped handle was close to the stock and ISSC included an extension block, which made things much easier to get hold of. Problem was, it would come lose on a regular basis. The new design is one piece, so giving better clearance as standard, along with a bit more security.

A toggle-type action is best considered like a human knee joint; with the leg extended it will withstand direct pressure from the ends, but bend the knee and it folds. Pulling the handle backwards, first breaks the locking strut by hinging and collapsing the twin arms outwards, then further rearwards movement opens the action. The stroke is fast and efficient and allows you to maintain your full shooting position, apart from you firing hand, obviously. So far, so good?

The trigger shows a wide, curved blade that breaks at a quoted 3.5 lbs, there’s a bit of creep but it goes off around the 4 lb mark and is easy to understand. This is backed up by one of the best safeties I’ve ever used. There’s a sliding lug in front of the blade that pushes forward to FIRE and back for SAFE using the trigger finger, so near ZERO change in the hand position. In FIRE mode, you can see a red dot uncovered on the side of the blade. Nice too is the fact they’ve retained the real Scouts massive trigger guard, so no problem for gloved fingers.

Feed is from a large, plastic (not steel as described), 10-round, box magazine with a release lever at the rear, it’s about the size of an M1 Carbine 15-rounder, so plenty to get hold of, compared to the more common and skinny 22LR types. The closed topped action shows an integral 7”, 11mm dovetail base, which sits about 5mm below the line of the Picatinny rail on top of the forend. Here, fitting an optic, now becomes a juggling act between ring height and objective diameter.

Sportsmatch sent me a set of their high, 30mm high mounts (HT036C) as I intended to use a 50mm objective, but they were too low, nothing wrong with them just the height off set mentioned. In the end, I settled on a Konus EL-SO 4-16x42 and used Sportsmatch’s 11mm to Weaver base riser blocks to get the height up enough to fit it on QD rings. Not a big deal, but one to bear in mind.

I was not expecting any dramas from here on in, as I considered the action, man enough for 22LR, and I’ve yet to shoot a rimfi re rifle that can’t group around the inch at 50 yard. Ammo consisted of Remington’s sub-sonic and HV Thunderbolt, MagTech HV and subs, Norma subs and my favourite Winchester 42-grain MAX subs.

Groups were poor, ranging from 2 - 3” at 50 yards, some making neat little clusters, then suddenly stepping out with holes appearing to expand them randomly. At first, I thought it might have been the moderator, so I removed it with no change in performance, for all the loads tested. For hunting this means to me a miss, wound or maybe a kill, but chances are, not with the bullet where you wanted it.

With certain loads, I also had feed problems; the Winchester MAX being the most notable, which has a large and fl at hollow point profile, it was catching on the cut-out in the front of the magazine. As testing proceed, this started to happen with other loads with a similar ogive shape. The solution would be to open the cut out a tad and make it slightly concave.

I searched the internet for videos and reports on the rifle and most, regrettably, agreed with my findings, even the groups with other brands of ammo looked similar.

One site; ‘Aussie Reviews’ agreed, but found the Scout performed well with Eley subs, shooting around ½” at 50 yards. Regrettably, Eley won’t send me any ammo for testing, despite asking them many times, so I could not confirm this. It could be the rifle was just ammo-fussy, but I doubt it.

I took it apart to see if the barrel was loose, which it was not and checked the action bolts were tight; yes. However, the forend seemed quite fl exible and you could knock the barrel on the inside of the free fl oat with minimal pressure. Taking the top of the forend off might make a difference, but it looks naff without it. What I found most annoying, was up until the range testing, I was really happy with the Scout; nice slick action, handy and cool looking, good trigger, great safety.

Getting the bolt out is a pain, as a back plate has to be removed so that the toggle can slide out, which means removing the action from the stock. I got down as far as taking the cross pin out for the plate, but after that it would not move. Quoting from the original Steyr RFR manual it states: “Disassembly of the weapon by the user is neither usual nor necessary. Disassembly may only be performed by authorized and qualified personnel.” So, you’ll have to clean the barrel from the muzzle end.