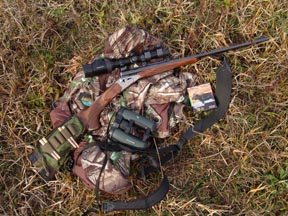 I first saw a Krieghoff in Germany in 1973 and fell in love with it. I don’t know why I like double rifles, but I do, as I would not give you tuppence for a double barrelled shotgun. The chance to do more than look came by accident, as I was talking to Krieghoff MD (Peter Brass) on another matter. Peter asked me if there was anything they could help me with and I said I was off to shoot some boar in Croatia and what was the chance of borrowing one of their Classic doubles? Much to my surprise and pleasure he said yes.

I had asked for the Classic in 30-06 and Peter said that was possible, but suggested that 9.3x74R would be better. This is without doubt the ultimate calibre for boar, so there I was Mr synthetic bedding and camo with what must be the most traditional of German hunting rifles and cartridges. Peter kindly said I could have the rifle for a few months to get the hang of it, and as I discovered it’s a bit different to the guns I normally hunt with.

I had shot 9.3x74R before in lesser makes of double and as I recall it had been pretty unpleasant. However, I was reassured by Mark Stone’s comments as he had test fired the Classic, in that it was not bad, just large, as it would be this gun he would take to Africa in 2008 for some hunting. The truth is that felt recoil, though a hard fact, can often be compensated for by proper stock geometry and as I was to discover Krieghoff do know how to produce something that is shall we say, a cut above the rest…

The Classic turned up from UK importers Alan Rhone. My first impression was of a surprisingly small and well proportioned rifle; if anything it seemed a bit slight. In essence it’s a side-by-side shotgun layout with double trigger, box lock action and top lever, apart from the thin rifle barrels and sights, the real difference is the de-cocker at the rear of the tang.

This was the basic model in terms of embellishments and showed the action in the white with just a bit of floral engraving. Krieghoff offer the Classic in the following chamberings - 30-06, 308 Win, 7x57R, 7x65R, 8x57JRS, 8x75RS and 9.3x74R. The Big Five version is for your grand African calibres - 375 Flanged Magnum to 500 Nitro Express. The blueing was superb, as was the wood and also wood to metal fit. When Mark visited the Krieghoff factory he commented that other companies work to tolerances; whereas these boys work exact. I have to say this was the impression I got, as the action opened and shut like a bank vault door with the top lever snapping to its middle position with no deviation.

The problem or trick with a double rifle is to get both barrels shooting to a similar point of impact (POI) at a set distance. The technical term for this is regulation and it consists of moving the muzzles in relation to each other to achieve this.

Most doubles are set up for around 50-75m and at that distance the groups can be disappointing. I shot one the other year that at 50 yards could not keep inside 6”. Unusually Krieghoff regulate (unless specifically asked for) at 150m, which is no mean feat for a design such as this and one that makes the gun a far more practical proposition…

The Classic comes with 23.5” barrels and basic iron sights; up front is a brass blade on a ramp, at the rear a big, U-notch plate on a short raised rib, which is windage adjustable. However, also included are a set of swing off rings for scope mounting. Swarovski kindly lent me one of their Z6i 1-6x24 EE (extended eye relief) scopes. With illumination and a true X1 power that could go up to X6 for a longer shot it seemed ideal for driven boar and short/medium range hunting.

Ammunition was kindly supplied by Viking Arms in the form of Lapua 285-grain Mega and, as is my want, I fitted an Eagle cheek piece bag on the butt. It occurred to me it would take any sting from firing and also be a good place to keep spare ammo for a fast reload.

This example has what Krieghoff calls a Bavarian butt, which shows a low/straight comb with flat/angled cheek piece. The pistol grip is wide and deep and I found my head position a tad high for iron sights even without the Eagle bag fitted, however it proved ideal for scope use. Length of pull was 14.75” (to the front trigger) to suit my long arms.

In keeping with some other German rifles the Krieghoff does not show a true safety catch, instead it has a de-cocker. To the rear of the top lever is a large, sliding thumb catch that cocks the mechanism when pushed forward, as opening/closing the barrels is purely for loading/unloading. Operating it takes a bit of a push, but by the same token it gives an instant make safe too. As once set further forward pressure on the lug de-cocks the mech and it slides back to its un-cocked position.

Sensibly the action can be opened even with the de-cocker in its (forward) fire position; however, there are a few caveats to this system concerning scope dimensions and ring height. The Swarovski has a rather wide eyepiece bell and I found that with the de-cocker forward there was not much room to get my thumb on to the top lever, unless I de-cocked the action first. With that understood it was time to start shooting and I was very excited at the prospect.

I elected to fire a few rounds standing just to get the feel of the thing. Snuggling in tight and glad I had elected for an EE scope I touched off the first barrel. Boom! The noise echoed round the range and the gun pushed me backwards a little, but in truth it was very well behaved for what in effect is a calibre not much below a 375 H&H. More importantly I could stand it easily so no built-in flinch - I could now get on with some practice.

Getting To Know You…

Pushing the lever open I broke the action expecting the empties to eject, which did not happen, as the Classic is not an ejector, so they had to be removed by hand. This proved less than easy under a scope, until I perfected my own immediate action (IA) drill; break the action then flick the muzzle up right and those big brass tubes fall clear every time. It occurred to me this was an oversight on what is primarily a dangerous game rifle, but on reflection – maybe not! OK auto ejection makes for a faster reload, but by the same token it’s something else to go wrong, so speed is sacrificed for reliability. Which is probably better, as once you have your IA drills pat, the reload is as quick as it can be, given it’s all down to you… The Classic was certainly different to the 4-5 shot magazine repeaters I was used to.

As boar was the game I elected to zero at 50 yards and at that distance the Classic was keeping both shots inside two inches and almost level, which for a double is very good and a glowing testament to how Krieghoff makes them! Back at 100 yards the gun was putting in near identical groups and I was starting to warm to it.

Speaking of that; the barrels do get hot and too much shooting does cause the groups to expand and even change shape. Hardly surprising given the lightness of the tubes. Krieghoff mention this fact in the handbook and even gives figures. For me the burn factor was high and I’d recommend a glove for your supporting hand, if you’re going to shoot a lot.

I used standard clay pigeons as targets, as shots would be taken standing so I’d need to get on to the target, drop the dot on and pull the trigger. This was great fun watching the clays literally vaporise as the big 9.3 bullets hit them. I’m no shotgunner and firing a double trigger set up is a bit different and requires more technique.

The Classic fires forward trigger right barrel, rear left. Clearance is generous between the blades and inside the guard so you can use a glove with no problems. Mark suggested that as opposed to physically moving my finger to the second blade, I should let the recoil slide my whole hand backwards to re-position it for the second shot. On the reload it was easy to pull out a pair of cartridges and slide them into the chambers, though I never managed to perfect the two spare rounds between the fingers of the supporting hand trick… But I was content with this IA drill too.

Over the chrono the Lapua ammo was averaging 2170 fps with an energy figure of 2476 ft/lbs. Not amazing, but that big 285-grain bullet carries a lot of mass and that would allow it to punch through pretty much anything, whereas a lighter bullet though faster and on paper giving more energy might not do so well on harder/deeper targets.

People speak of double rifles in almost mystical terms – they give the quickest second shot, they handle and point like a good shotgun and are the most reliable gun on the planet. All true as I discovered, but by the same token they are usually very expensive (certainly the good ones) and very limited in effective range. I really enjoyed using the Krieghoff and I would love one. But they are very much a horse with a course and that’s close range and on the more dangerous species. Calibre-wise I consider 9.3x74R more than enough and that would include buffalo!

As you will see if you read this month’s Hunting in Europe article, me and the Krieghoff made it to Croatia but never got a boar, such is hunting. However, I was confident that had any tusker presented itself then I would have dropped it with ease.

At around £4000 + for the basic model and £6000 + for the African Big Five version these are not guns you buy lightly. However, not only are they magnificent pieces of engineering, but also highly practical close range equipment; where firepower and reliability are at a premium. Having shot a few different double rifles over the years; if I was to buy one then it would be a Krieghoff no question!

My thanks to Peter Brass for giving me the opportunity to use a truly amazing rifle!