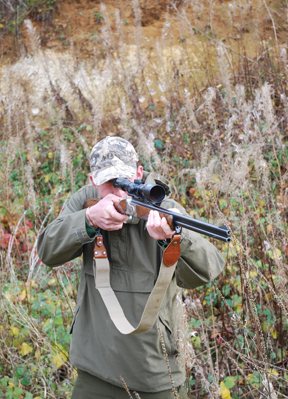 Last year I got the chance to use a side-by-side Krieghoff Classic double rifle; it was one of those long term dreams that came true. It’s funny when you realise an ambition, as although I thought the gun was superb I came away from the test thinking that though I liked it; a bolt-action repeater was more sensible for me. However, MD Peter Brass asked me at IWA 2008 if I would like to look at their over & under Ultra, which would give me the opportunity to try a stack barrel version and, as it happened, also taught me a bit more about the marque in general.

A double rifle - cost aside - is not for everyone, in truth it is a reasonably short range option and at its best for driven and dangerous game. My experience with the Classic in 9.3x74R (rimmed) showed that the gun could shoot into 1 ½” at 100 yards, which for a British deer hunter is a bit limiting. OK it can push out further, but does not have the pin point accuracy of a bolt-action. The design is a bit of a contradiction in terms as in Krieghoff’s case they keep it simple with a non-ejector mech, which is pretty much 100% reliable. However, empties have to be pulled out by hand or shaken free. Reloads then are a bit slower and you do need to practice dropping the rounds into the chambers. This is off set by the fact that it gives you one of the quickest and most reliable second shots; again useful for dangerous game etc.

Masters of the Double

All double rifles are regulated – the individual barrels are angled then set in position in relation to each other so they will fire a workable group at a set distance. It is this really that rather limits their range potential. This is usually under 100 yards normally around 65-75 yards with a view to the fact this is probably the maximum range you can expect to effectively hit a running boar. What separates the men from the boys is how well this is done and Krieghoff are masters of this art. My Classic shot it’s 1 ½” at 100 yards in a dead flat line, lesser makes struggle to hold a 4” x 6” group at 50 yards or less.

Double rifles are normally regulated then fixed permanently in position by soldering the two tubes together. The Ultra being an over & under is built this way too, but also offers the better option of the Thermo Stable (TS) version. Here the lower barrel free floats in a ring attached to the upper one and can be easily adjusted by jam screws to regulate it. This then gives you a top barrel that alone should have the ability of a bolt-action in terms of range/accuracy, with no problems with rapid heating affecting the second tube. Plus the ability to bring the second tube in as tight as you require, making the Ultra a far more attractive model for people like me who like the idea of a double, but still need a longer range ability. Cosmetically Krieghoff have fitted dummy side ribs to the Ultra just to keep that solid, double gun look.

Like the Classic, the Ultra is built on a 20-bore action, which gives you a good deal of versatility in calibre choice as you can go for a combination set-up with 20-bore shotgun tube along with a rifle barrel below. They also offer the KS conversion, which allows you to put a rifled insert into the 20-bore, I like this idea as you can get the smaller centrefires like 22 Hornet, 222 Rem and the roe rounds like 5.6x50R Mag and 5.6x52R, right the way up to 9.3x74R. More common is the same calibre set-up, which is what I have on test here in 30-06, or the twin calibre Bergstutzen with various combinations from 22 Hornet to 9.3x74R. The more I read about and used the Ultra the more I saw that if money was not a problem it would be the double rifle for me, despite the more appealing layout of the Classic.

Pretty guns have never turned my crank, as I like mine plain and functional, but even I found the engraving on the action not unpleasant with a red deer on one side and a wild boar on the other with floral motives on the borders. The wood work is magnificent with two well matched and finished pieces of medium walnut and the blueing is second to none.

The layout shows a Schnable forend with a mid-width rectangular shape; the butt offers a full pistol grip with a Bavarian cheek piece and a rounded comb and slim rubber recoil pad. Chequering is not that aggressive but offers enough surface to give a secure grip and QD sling studs are fitted and swivels included too.

On the double rifle variant barrel lengths range between 21.5” and 23.5”, mine was the maximum. The action is opened by a top lever, with the cocker/de-cocker lever behind (kickspanner) on the tang; this is the only form of safety as there is no separate ON/OFF catch. The theory being that the gun is left un-cocked until the shot is required then a push of the firing hand thumb on the kickspanner cocks the action. Once set opening and closing the action re-cocks it automatically and when you have finished you just de-cock by pushing this control forward where it will spring back to its safe position.

The Ultra offers the choice of steel or aluminium (Dural) actions, the latter reducing the weight by 12 oz. My example was the former material and I have to say it came up a little on the heavy side, however this does make for a recoil-friendly and stable gun in the shoulder with perhaps a bit more effort required to move it. This would probably be noticed more by a shotgunner than a rifle shooter. Given the choice of barrel lengths, action material and calibres the Ultra can weigh between 7 – 8.5 lbs.

The universal trigger is a twin blade design with the rear firing the top barrel and the forward the lower, average weight is around 3.5 lbs with a crisp and understandable break. Length of pull is good though I found I had to stretch a little for the forward blade. The extractor is a single, central plate that lifts both cases up about ¼” where they have to be removed by hand. On the 30-06 version which use a rimless case a sprung dente in the extractor cut-out engages the canelure (case head rim) to give extraction. With rimmed calibres there’s a pocket that the rim sits in.

Sighting arrangements consist of a ¼ rib on top of the re-enforce area with a flat V notch with red insert at the rear and a ramp up front with a large, red plastic bead. Both are adjustable, the former for windage and the latter for elevation. What is unusual is the open build of the rear, Krieghoff call this a ‘see-through’ as both sides of the sight plate are skeletonised, which gives a clear view of the target. Given this is probably intended for shorter range (Maximum 50 yard) use it’s a simple yet effective system.

The rib also features a dovetail for their QD scope base, which is locked by levers. The Ultra came fitted with a Zeiss 1.5-6x42 with a simple dot reticule, which though good for driven was not ideal for accuracy testing. Importers Alan Rhone kindly supplied a Zeiss 2.5-10x50 T with a 4a-type reticule, which allowed me to gauge the gun’s potential far better.

Ammo went to Remington Express 150-grain SP and Lapua’s 170-grain Naturalis and 200-grain Mega SP; this represents a reasonable weight cross section. Shot of a rest at 100 yards with the Express the gun prints near dead vertical with a precise two inch spread, which is easy to adjust via the Thermo Stable mounting ring.

Checking one barrel at a time showed that the tubes were capable of 1” groups, however this only applied to the 150 and 170-grain loads, as it did not like the heavier Mega, which probably requires a tighter rifling twist. For me that would mean using the top one for longer range targets with confidence, with a second shot just a press of the trigger away if required, which would fall near in the same place (given how I had set it up).

One aspect of the design I had never considered did throw me a little at first, as the rimless 30-06 cases cannot be shaken free – unlike the rimmed 9.3x74Rs that I had used with the Classic. With the latter gun I had perfected a technique where I broke the action and flipped the barrels vertical letting gravity take the empties. The reason being the sprung détentes that hold the canelure of the case in place also stops them falling out. This had never occurred to me and trying to get my fingers on to the small amount of exposed brass was not an ideal situation and with gloves even worse.

This made my mind up that if I ever do get a double then I would opt for a rimmed calibre. Looking at what Krieghoff offers, then it would be a 7x57R or 7x65R or the 8x57 JRS; all of which would be more than enough for any deer/antelope species and wild boar with the right bullet.

At the end of the day, and though I still think the Classic is the better looking, it’s the Ultra-20 over & under with Thermo Stable tubes that gets my vote. Calibre/barrel options are far more comprehensive and the fact that the gun prints vertically, and you can regulate as you need, to my mind makes it a better longer range option too.

However, we must never lose sight of the fact that the generic double rifle is a highly specialised tool, which is at its best for short range moving targets. Cost aside, which is another consideration; justifying such a design is not easy. If I could then I would get the Dural-actioned TS version in one of the 7 or 8mm calibres I mentioned, then add a set with a 20-bore tube with a 5.6x50R Mag underneath as a walk-about and small deer gun.