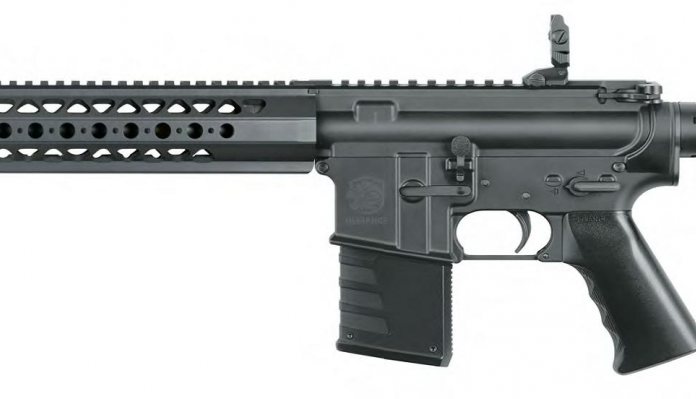 22 AR15s usually fall into two groups, the mass-made designs like the Smith & Wesson M&P 15/22, Colt Tactical, Beretta 160 and Hk416 and then all the custom and semi-custom jobs, normally based on the 223 Rem guns. Price-wise there does not seem to be much middle ground between these two groups, but something just came over my desk that might just fill this under-utilised segment of the market.

So, what if I said you could get a top-quality, mil-spec, allaluminium receivered 22 AR, with a quality, free-float barrel and fully functioning controls; including forward assist that offers its own magazine system as well as being compatible with both S&W and Black Dog mags too. The price; £875, not cheap but certainly not the £1000+ and then some of the more custom kit, enter the Kriss Defiance DMK22C!

Kriss are perhaps more famous for their unusual semiauto Vektor pistols and carbines that incorporates a low bore line combined with a recoil mitigation system for superior shooter control. If you’re a fan of the Evil Dead film franchise, you can see the heroine (Milla Jovovich) blazing away with a pair of Vektor pistols. As an aside, looking at the build, I reckon a 22 rimfire version could make a useful if unusual LBP or carbine, who knows!

Launched in 2106, the DMK22C was envisaged as a full spec 22 Long Rifle AR15, for cross training and as a far more economic option than the centrefire AR. It’s also the first rifle of its type for many years to offer a full aluminium alloy build spec as opposed to polymer. Okay, nothing wrong with plastic, but for those that want something more, it’s there! For UK use, and from my perspective, it offers a well-built and reliable, modern 22 AR platform that won’t break the bank. There are two variants, the LVOA is almost identical, apart from its full-length forend that completely encloses the 16.5-inch barrel. Made by War Sport, this look has become very popular lately; personally, not a fan and I prefer the 13-inch version, but each to their own!

Build quality is immediately apparent, with nicely made and presented A2 receiver halves made from forged 7075-T6 aluminium with the usual forward assist plunger and case deflector on the right side, along with ejection port cover. The build is a flat top, with a Picatinny base that extends onto the forend to give a 20-inch mounting length and 3-inches longer on the LVOA version. On the left, the safety catch and bolt release lever, with a standard, automatic last round hold open system inside. The pistol grip and butt are also from Kriss with an A2 style with finger grooves, but no in-fill back strap. The butt is 6-position telescopic, with a more L-shaped rear that offers a gripping hook for prone/ bipods use, along with QD sling swivel sockets. This build is compatible with Most MIL-SPEC AR-15 trigger kits and charging handles and doubtless all the other go faster bits we love!

The 16.5-inch medium/heavy weight barrel is 4140 chrome molly steel with a Black Nitride (QPQ) finish and a rather fancy muzzle brake. It looks cool but is rather academic for a 22LR, Kriss could have saved money and just put a standard AR brake on the ½ x 28 UNEF threaded muzzle. As normal, the twist rate is 1-16-inch, right hand for your average 40-grain 22 pill. Over this is the 13-inch, M-LOK, free-float handguard, so you can fit rails etc if you wish.

Kriss says that the DMK22C can use Ruger 10/22 barrels with some form of adaptor kit, however I emailed them to ask for information, but and despite replying saying they would, they never did. So, currently the jury is still out on that one, but given the sort of performance my test showed the adage of – ‘if it ain’t broke don’t fix it’ springs to mind, as it’s a real shooter! So, I was happy with the standard tube!

I like iron sights on my ARs and Kriss does not disappoint with a fine set of modern, lowprofile fold downs, the rear is a windage-adjustable double aperture (large/small) and up front a post with thumbwheel, vertical adjuster. Equally practical, they are not deep and when stowed do not foul even the largest eye piece bell. The importers, SHIELD, fitted one of their SIS red dot sights, which is an upgraded and improved version of their original Mini Sight and I added my old but reliable Leupold 3-9x50 scope for accuracy testing.

The bolt looks like your normal 22AR drop-in unit, but the forwards assist (FA) intrigued me. My only experience of this system on a 22AR was from a CMMG, which used a separate plastic block behind the bolt with slots in it for the FA’s plunger to engage. It was not a success, though it worked, it also caused stoppages due no doubt to the way is slapped around. Kriss has opted for a full steel bolt body with more slots, which reciprocates without any issues. Sometimes on 22 ARs you do get a failure to fully chamber (short round) and a quick pump of the FA’s bullseye button will close the bolt easily. So, nice to see something designed to do the job properly!

For what feels like a standard AR trigger the pull was pleasing, not match-like but with a tad of take-up followed by reasonably break. Kriss says it goes at 5.5lbs, but it felt more like 4lbs to my educated finger! Many would be happy with this, as I was, and it’s more than fit for purpose and given the price of drop-in, replacement units, will save you at least £150!

I ran the rifle on Winchester M22 high velocity 40-grain round nose and their 42-grain sub-sonic Max and it functioned with both loads 100%. Controls worked well with the magazine dropping clear of the well at the press of the button and the action reliably locking back open after the last round too. The safety was easy to manipulate, but I would fit an ambidextrous catch, I have these on both my Smith & Wesson M&P 15/22 and SGC Speedmaster AR15s, as they make the guns a tad more practical.

I was also intrigued by the information supplied by SHIELD that the DMK22C would also run on both S&W 15/22 and Black Dog magazines and decided to put it to the test. As standard, Kriss offers 10 and 15-round in-house units, which are about the same shape and size as the original, straight, Colt 20-round 223 Rem mags. All-polymer, they are easy to fill, even without side buttons!

Starting with a 25-round 15/22 magazine, I filled it up to maximum and the rifle shot the lot no problem; even automatically holding open on the last shot. I don’t think this was a lucky coincidence, as and although Kriss did not copy the Smith design, they have doubtless configured their hold open system to allow full function too! The Black Dog was next, which fed but gave occasional stoppages and only gave partial hold open, as it only relies on the bolt being stopped by the follower.

With the Leupold on top, accuracy was most pleasing, with consistent ½-inch groups at 50m and right on the money at 100 with around 1-inch too with quality ammo. So not fussy and accurate too; what’s not to like?

For free-hand use, the M-LOK forend is smooth and not too wide, so easy to hold and if you want lights and lasers etc then there are plenty of adaptors to fit; though saying that, I would have liked the option of a QD sling stud to fit a bipod, as with a pod up front and a moddy this would make a nice, 100m bunny basher! Cosmetically, apart from black, you have the choice of finishes with Cerakote in arctic white, flat dark earth (FDE) and green- and I must say, I’m a bit tempted to sell my Smith 15/22 package and invest in a DMK22C!