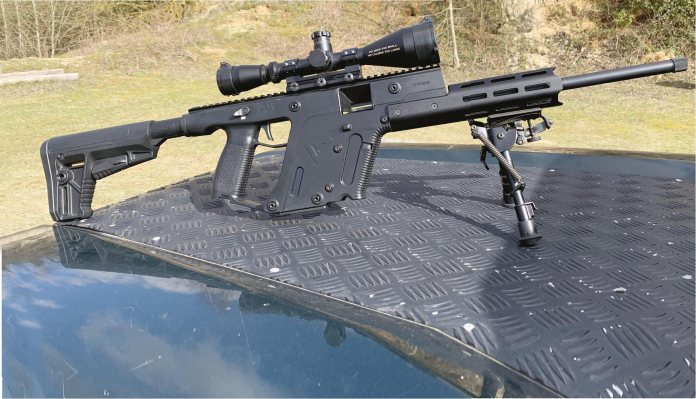 Occasionally something comes across my desk that can sometimes lead to the wrong conclusions. Such an item was Kriss’s Vector 22 CRB. They make unique pistol-calibre, centrefire, semiautomatic series of firearms. They use a recoil absorption system that moves the bolt from the horizontal to the vertical planes via their Super V mechanism, plus a low mounted barrel.

Not their first rodeo

Kriss’s first Segway into 22 rimfires, was their Defiance DMK22C, a sweet little AR15 clone that I really rate! With shooter interest in Mini Rifles/22LR look-a-likes, I was keen to see what was on offer. First impressions are of a rather heavy and ungainly rifle, with a high sight over bore line. Included are fold-down/flip-up irons sights, with the top of the upper showing a full-length Picatinny rail.

The bulk of the rifle is the large, boxy lower section that comprises of the forwardpositioned magazine well and to its rear a large space that on a centrefire would house the Super V mechanism. Behind this is the pistol grip with its enclosed, cutlass-type guard. The gun is to be considered in two parts: the grip, butt, upper body and Pic rail as one, and the barrel, forend and magazine assembly as the other, which are held together by four push pins.

Stripping is easy; cock the action and set to SAFE, push out the four pins and separate the upper and lower halves. Looking at the rear of the lower, there’s a plate retained by two cross pins, push it forward against the tension and push the pins out. Under control remove the plate, spring and bolt.

Feed is from a 10-round, Glock-type, single column box magazine that is retained by a press-in, release catch top left of the well; only one mag supplied. Kriss say that 30-rounders are coming, and the importers, are saying end of April. This will be the make or break for the 22 CRB, given its doubtless core use. Many shooters, myself included, like a bit of firepower with rimfires like this and the competition in the UK offers at least a 20 or 25-round payloads!

The build shows a combination of polymer, steel and aluminium alloy. The front of the magazine well is slotted for hold, as is the pistol grip. The butt is a telescopic, 6-position (CAR15-type), up front is a short, free-float, M-Lok forend, the slim barrel is 16” long and threaded ½ x 28 UNEF.

Controls consist of an ambidextrous safety catch on the upper body that flips down to FIRE and up for SAFE. Everything else is positioned on the left side.

The bolt release (above the mag button) is a large rocker lever that offers manual release/setting and automatic, last round hold open. Most noticeable is the huge, hinged cocking lever that pulls out to retract the bolt and is positioned forward on the upper body. It seemed overkill to me and was to cause some initial confusion.

Another obvious feature is the massive, cone-shaped ejection port that sits above the bolt, as opposed to alongside it, like a S&W 15/22. Given the low bore line, this means that the ejecting case does not come out sideways, but up where it pings off the flat sides of the port. Apart from its unique looks, my first impression of the 22 CRB was of a heavy rifle, even before I scoped up. Second was the mushy trigger, doubtless due to the fact that it uses a linkage to connect it to the hammer.

In terms of the ergonomics, there’s no doubt that you will need to high mount any optic, be it scope or red dot for a comfortable head position. The large, M-Lok forend offers a decent hold, plus you can stick on rails; I used a Magpul adaptor to fit a Harris bipod. The near vertical pistol grip is comfortable and, as I discovered, the front of the mag well, sort of doubles up as a rear-mounted forward grip for an alternative and practical hold.

The rifle comes in black as standard but is also available in FDE (flat dark earth) and of all things, white; these last two up the price by only £25. Kriss also offers a shorter forend and talking to some guys at the show, indicated they would fit this and chop the barrel to the minimum 12”, UK-legal length. Some airsoft accessories will also fit, and I have seen a full-length, 4-way forend; well, it takes all sorts!

Typically, I did not read the manual, as I considered myself expert enough to know how things work; ah, hubris. That big, cocking lever is 2.5” long and I flipped it out and pulled it back, but it didn’t move a millimetre. Applying more force, the action opened, albeit unwillingly; not impressed. I hypothesised that the hammer in its down position was somehow resisting the bolt too much. Bit of a pain, but with the auto last round hold open, all you need to do is change mags and press the bolt release to carry on.

Test 1: with any 22 semi, my first concern is reliability and, I assembled 11 brands of ammo from the slowest Norma subs up to the fastest CCI MiniMags and it ate the lot and locked open with them all, good start.

Test 2 was live round ejection and here it was not as positive as I liked, rounds came out, but not that fast, with the last one occasionally falling back into the bolt void, due to the slow speed of this manual function. The drill I used was to roll the gun to the right as much as possible, before opening, so that gravity would help. I had some short extraction due to low powered ammo with the same results and solutions. By this time the hard cycling was starting to get on my nerves, and I saw this as a definite negative.

Magazine release is positive with the empty clip free falling cleanly. But, with my S&W, you just extend your trigger finger and push the button, while your left hand goes for the reload. With the Kriss, the left hand does double duty; ditch the empty then go for the full one. The mushy trigger was serviceable and not that heavy in pull.

A question of leverage

Now fully vexed by the hard manual cycling, I decided to read the manual, and all was explained. Despite the obvious size of the handle, Kriss says it’s best to cock with two fingers on it right upside the action. I can only assume that pulling the whole lever causes it to swing back too much and bind the bolt; in the end, I found I could accomplish this with just one finger, so problem solved. However, as the 22 CRB uses the centrefire frame, perhaps the big lever is too much, but it was easier to retain than redesign things, hence the comments in the manual?

I’d say I put around 450-shots through the Kriss and the only stoppages I encountered were those caused by those occasional low powered rounds you always get in this calibre. I did note more of a build-up of fouling on the bolt guides and breech face, due to the bolt being buried deep inside the action; the firing gases might have a harder path to exit the ejection port, so things foul up faster. Let’s face it, 22 semi-auto, blow back systems are messy! With my Smith, I maintain a cleaning regime based on round count. Do the same and it will not be an issue.

Accuracy testing was done at 50 yards with the Harris and a Leupold VXII 3-9x50 fitted, and I picked a cross section of standard and HV ammo for this sort of work: see KRISS BALLISTICS. The high sight line, which depending on scope height is between 3.5 and 5”, at close range needs to be accounted for. At 15 yards it prints 3-4” below point of aim, which could see shots falling out of the centre zone. Figures, as always, are a bit of a mix, showing that some rifles prefer different loads to others. As always, stick to what your gun likes!

To be honest, I don’t think the 22 CRB brings a lot to the party for a Mini Rifle; it’s certainly different, which will appeal to some, but I’ll stick with my Smith thanks. Given the massive hollow space behind the magazine, that would have been a good place to store a spare mag too, if they included one. However, you may feel different and, as long as you keep it clean, it should run reliably and shoot as well as anything in this class. One thing’s certain, you will stand out from the crowd with one of these.