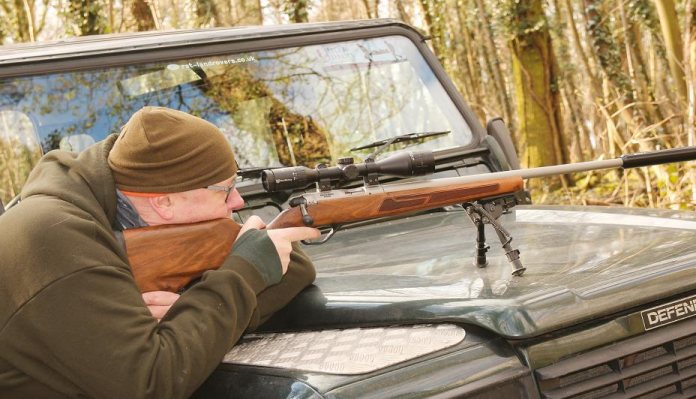 It was early in 2015 that I first heard of the Lithgow LA101 CrossOver .22 rimfire bolt-action rifle and tested it for the magazine and also our Gun Mart TV video channel. But what made it a bit different was it was manufactured in Australia, which is a bit rare these days! Lithgow was originally the government arsenal and has been in existence for over 100-years making military weapons and now sporting guns too. Starting with the LA101 as I discovered there are more exciting designs to look forward to, including a couple of sweet tactical full bores!

In a world where the 22 rimfire, bolt-action is doubtless the most prolific rifle design ever; what makes the CrossOver worth looking at? For me anything new is of interest as that’s my job, but why would you even consider looking at yet another bolt-gun? Well, I have to say the rifle looked good and certainly a cut above a lot of other designs. If anything, as I discovered it was beautifully built to very high standards; maybe a bit over-engineered in places but; better that than not. I think my real niggles were it was a little large and heavy for the calibre at 39.4” long and weighing a healthy 6.83 lbs with a 20.9” barrel. The last feature is not really giving a lot extra in a 22 Long Rifle cartridge. If I was to put a label on the LA101 then it would be more walking varminter than sporter!

The original test rifle was the synthetic with a black stock; Lithgow said that walnut and laminate furniture would also be appealing. Equally they would be adding 22 Magnum (22WMR) and of course Hornady’s amazing 17HMR to the calibre pool. At the IWA show this year I was visiting their stand and was told the 22WMR was soon to be launched, followed by the 17HMR version. Pity that, as I was hoping the 17 would be first as it’s most popular with us Brits. The CrossOver is seriously built with an all-steel action that locks at the rear by three, equidistant lugs, which give a short, 60° bolt lift angle. The handle is long and straight and finishes with a polymer ball end, both features really improving operation!

The mid-weight barrel is cold, hammer-forged with its distinctive exterior spiral pattern, which is a result of the process. It’s also threaded as standard ½ x 20 UNF and comes with a protector. All the metal work is treated to a Cerakote H, Titanium finish, which is sort of champagne looking and tough as you might expect!
No matter what stock options you get, the look is a very pleasing two-tone effect.

The Crossover is a unique design with a distinctive stock style and the walnut is identical in layout to the synthetic. The butt is deep with a low grasping hook and the length of pull (LOP) can be adjusted by spacers; so good for everyone. The deep/wide pistol grip is well angled for an easy hold with laser-cut, textured sections on either side as well as up front. The comb is high and wide and offers a good head position. A rubber butt pad finishes it off and there’s a QD sling stud set at an angle on the hook and another under the forend. The forend is long, deep and square in section and provides a lot to get hold of. It offers a generous free-float and is rigid too. The trigger guard is polymer and has masses of room inside for gloved fingers and has an angled front strap.

The magazine and release catch have been lifted from CZ’s latest 455 rimfire. The well is cut for the longer 22WMR/17HMR cartridge overall length (COL). However, the 22 Long Rifle guns come with a rear filler block to accommodate their shorter COL; this means you just swap the block out if you have the Magnum. As standard, feed in 22 LR is 5-rounds and obviously CZ’s 10-round polymer mags will also fit. Lithgow are now offering both capacities in house.

The safety is a 2-position, rolling lever, rear/right of the action and is typically well placed so as not to break the firing hand grip too much. It pushes forward to FIRE and reverses for SAFE! The mag release is at the front of the well and there are small cut-outs either side to aid magazine removal. At the rear of the bolt is a plastic shroud with a red, cocked action indicator pin that can be both seen and felt. Bolt removal is just a matter of opening the action, squeezing the trigger and pulling it out.

The trigger shows a long, near straight blade with a slightly concave face, it’s vertically grooved and Lithgow says it breaks at 1.5 kg. Though it’s crisp and clean I found it nearer to 2 kg and a tad heavy. It’s not shooter adjustable, though Lithgow says a 1 kg spring is available to be fitted. In use it’s easy enough to learn but I would want the 1kg spring! Two nice features are the pre-fitted, steel, 1”, Weaver-type bases and the fact a dedicated left hand model is also available in all calibres.

Despite the rifle being a little larger and heavier than the norm; I really like the LA101 as it’s exceptionally well built and finished and is really a cut above the pack! It’s a bit more expensive than most but that extra money is buying one hell of a gun none the less!

Importers Highland Outdoors also supplied a Hogan Decimeater, 22/17 rimfire moderator and a Nikko Stirling PanaMax, 1” bodied, 3-9x50 scope with adjustable objective, wide field of view, with ½-Mil-Dot reticule. I supplied a Harris BRS bipod and opted for one of my favourite sub-sonic loads the 40-grain Winchester HP along with a cross section of other types.

Accuracy was exceptional with the Winchester subs cutting a cool ½” at 50 yards and if I did my bit an inch at 100. More than good enough for head shots at all sensible distances with this calibre! Feed and function were very good, with all I fed the LA101 going through it smoothly. I recall on the test of the original polymerstocked model it did not like bullets with a more truncated cone style ogive, with feed being a bit spotty. This time around it did not seem as critical. I have to say that both the PanaMax scope and Decimeater moderator proved well up to the tasks. In the former case, the reticule was crisp with plenty of holdover points that are well suited to the rather curved trajectory of the 22 sub-sonic cartridge. In the latter I was pleasantly surprised that what is essentially an air rifle-style build with a wrap material brought the noise down nicely! I had assumed this filling might get shredded by the blast and hot gases but this was not the case!

I also liked the fact that the CrossOver feels and handles like a centrefire rifle, many rimfires are built to smaller dimensions and meaner construction; not so here and it feels very good overall. Saying that I got the chance to handle the first centrefire version recently, the LA102, which is a little heavier and offers a 22” tube. Naturally the action is longer and shows what looks like a full-length, integral, Picatinny rail with a slightly different safety catch system. But apart from that is identical in every other way.

Getting a bit critical I found the safety catch lever clicked loudly when flipped to FIRE, which might be a bit of a give away for any sharp eared rabbit or hare. However, a few hundred rounds down the barrel might just smooth that off a bit; we shall see. As might be imagined prices will vary as to stock material, I rang Highland and they said: black synthetic - £849.99, walnut - £914.99 and brown laminate £946.99. This does then put the LA101 into the middle/upper bracket of rimfire rifles, but you are getting a lot of rifle for your money if that’s what you want!