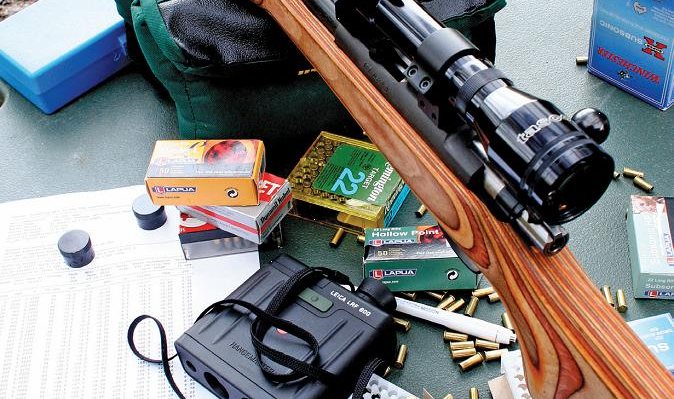 Long range varminting is a real passion of mine, which often involves some expensive rifles and scopes and feeding the things can be equally costly.

That’s why plinking with a .22 rimfire at steel silhouettes of rabbits and crows dotted about the field up to 200 yards satisfies the need for precision but can be a cheap alternative.

Not only that but using a rimfire instead of a centrefire rifle makes it very challenging, with trajectory compensation being crucial and wind drift can mean a hit or miss at any slight velocity change. Best of all it’s quiet and very cheap and you can burn through hundreds of rounds in an afternoon. It is seriously fun and addictive and a really good way to learn trajectory drop and judging the wind without breaking the bank!

I have used several rifles over the years, including my sporting Sako Finnfire but more dedicated .22 match rifles with heavy barrels make excellent donors for the 200 yard task.

One rifle was the semi custom CZ that I made up from a CZ Varmint 453 whose set trigger greatly enhances operation and therefore accuracy potential of the firing sequence. Straight out of the box a CZ will always shoot well but the relatively rounded forend of the varmint stock is not ideal for shooting off bags as I wanted to do, so my substitute stock came into play. It was a Shehane Tracker from the USA and inletted for a CZ action. Bill Shehane is one of America’s best long range shooters and his proprietary built stocks are designed to exude every ounce of accuracy from your rifle and shooting style.

Designed as an off the bench shooting platform and designed to ‘ride the bags’ in recoil and thus offer extreme accuracy without any recoil or pilot errors. The stock profile is where the magic is, the forend is broad and flat underneath, thereby you have a wide and deep wood surface to rest on a sand bag and glide over the top unimpeded and without tilting from the vertical axis; very important! Similarly, the rear section of the butt has a straight-line profile that again rides the rear bag and there is no cheek piece. These stocks are really designed to be shot free recoiling i.e. not in the shoulder, with only the trigger being depressed between thumb and forefinger. Admittedly there is bugger all recoil in a .22, unlike a centrefire bench rest version of the same stock, but the principle still holds true.

The other rifle, a real gem, is a Remington 40X .22LR I prised out of the hands of Norman Clark. This uses the same footprint as a Rem 700 or 722 and so accepts custom parts for these two and makes a great donor rifle. I shot the 40X as is, though with a few mods. First up the trigger, although good, just would not adjust down light enough for my liking and after the third time the ball bearing and springs deposited themselves on the carpet, I fitted a superb Trigger Tech replacement. This trigger is a big improvement and gives a superb light 1lb pull and zero creep to eke all the accuracy out of the 40X.

You could go the high end scope route but in keeping with the age and looks I was after and I am just odd that way, I fitted a retro 1970 Tasco 706 barrel-mounted scope with x12 power. The Rem 40-X was introduced way back on July 5th in 1955 and was originally dubbed as an ultra precision .22 Long rifle target design; however, we hunters soon took it to our hearts for its supreme accuracy and fitted scopes to achieve ultimate accuracy potential.

The design was not at all rimfire, in fact the action was a modified larger centrefire model 721 and 722 action converted to accept rimfire rounds. This meant the 40-X was massively over engineered and virtually indestructible. The large outer diameter means there is a very strong rigid platform from which the bolt can lock and dampen vibrations. This really helps in the accuracy stakes and aids consistency. The large cylindrical surface area is also easily bedded into the stock.

The Rem 40-X is a single shot and the round is placed onto the cartridge shelf and perfectly aligned into the tight, Match chamber by the bolt. Best of all is the twin bedding device hidden in the front section of the forend. This ‘group-tightener’ has two screws indexed into the stock that can be accessed from the bottom and tightened to exert an upward pressure on the barrel. In this way you can tune the harmonics of the barrel to any ammunition you are shooting to achieve the best accuracy possible.

Contrary to belief, high velocity ammunition would not be a consideration in this test despite its higher speed and longer range potential! This ammo achieves greater speed by using a lighter bullet than normal. The end result means it actually loses energy quicker than a slower 40-grain bullet and at greater ranges is also more susceptible to wind drift and therefore reduced accuracy and consistency! An old sub-sonic .22 rimfire below the speed of sound is not pushed about so much like a supersonic bullet above the speed of sound and so ambles along with a lot less hassle by Mr Windy and thus shoots with a greater degree of accuracy. It’s the same with subsonic full-bore loads; there is a sweet spot below the speed of sound where minimal air resistance greatly contributes to the accuracy and consistency of a projectile. The only exception was the Lapua hollow point, as this 40-grain semi HV load has been good in the past. (See CZ 453 Results on the next page)

After a 50 yards zero range with all of the ammunition tested to establish consistent velocities and accuracy potential, it was clear some of the ammo was better than others. The CZ loved the Lapua Hollow point loads that at 1196 fps were just supersonic and gave outstanding 0.35” average groups, whilst a true sub-sonic load from Eley at 1036 fps was not far behind at 0.40” at 50 yards.

However, it was the 200 yard groups that told the story, the Lapua Hollow points fell to 4th place, whilst the Eleys kept their accuracy all the way down range for 3.75” 5-shot groups. The RWS subs at a slow 981 fps also gave concentric 4” groups and the RWS Match ammo similarly shot well at both 50 and 200 yards.

The Rem 40X was even better, now the Eley subs at 1054 fps velocity were shooting 0.35” 5-shot groups at 50 yds, which is superb for a 1957 rifle and scope combo. Stretching out to 200 yards gave lovely circular 3.85” groups on the steel crow. The new Winchester 42-grain Max was not far behind, despite their very open hollow point design and the RWS subs were very consistent too.

One of the real problems was scope adjustments to compensate for the enormous trajectory drop from the 50 yard zero for the subsonic ammunition and the other was the fluctuating wind!

SEAT OF THE PANTS ELEVATION

I did not have an MOA compensating scope rail, nor set of scope bases as on my other longer range rifles and the elevation adjustment maximum range and the 1/8th adjustments on the CZ `s Tasco, although precise, ran out far too early on the elevation range. This facilitated the need to add an additional aiming point above the target. I used steel crow targets, as they both rang out when hit and left a small lead splatter on the crow steel on a successful hit.

The Rem 40X however, with its vintage Tasco, was mounted to space the adjustment turrets to ¼” per click and the external elevation and windage adjustments like micrometers had oodles of adjustment for 200 yards easy. This one was only x12 power but had superbly sharp optics and an ultra fine cross hair gave a precise aiming point.

I then ran the data through QuickTarget ballistics program with a custom bullet and BC I entered myself to get a pretty darn accurate down range trajectory drop chart. (See Trajectory Charts Rem 40X results)

In truth, I would not attempt sniping at rabbits at that range, despite the good accuracy and anyway it’s great fun plinking at those steel Hoodies.

It really gets the old grey cells working as regard trajectory, wind and precise shooting techniques, plus it’s a good way to spend an afternoon honing your skills, as it can be very unforgiving but also very cheap in comparison to centrefire shooting. With a sound moderator fitted you will not disturb any one. It’s also a practical way to learn how differing wind speeds affect a bullet’s flight, which will transfer to actual use in the field. I have upgraded this sub-sonic long range shooting to .308 and .338 subsonics shooting 300 grain Sierra Game Kings out to 500 yards, which is really interesting!