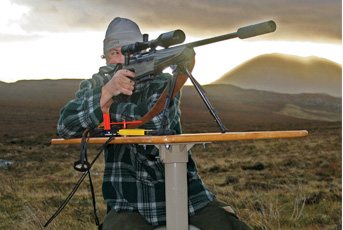 Harri Laaksonen of Pirkan Ase Limited is one talented gunsmith from Finland - the land of lakes and Moose. His firm was established in 1979 with master gunsmith Mr Torsti Laaksonen designing a unique straight pull rifle action, the Lynx 94.  Available in Hunter (sporter trim) and a Target version, these are precision-built, almost handmade rifles that have one purpose, to shoot straight and bring home game or trophies. I have been testing a Lynx 94 Target version in 6.5x47 Lapua for over a year and it’s not going back - I love it, don`t tell the spousal unit!

Beautifully machined and unlike other straight pull rifles the Lynx uses a twin-lug, transverse locking system which psychologically feels safer to me. The action is machined from a solid billet of Chrome moly steel and then strength hardened for longevity with a full length 17mm dovetail and drilled and tapped for mounts the same as Tikka. Alternatively Alan Rhone imports the excellent Ziegler Q/D mounts that offer a guaranteed return to zero!

The bolt has a ruddy great, T-shaped, ‘gear stick’ of a handle like a Biathlon rifles’ for use in the cold with gloved hands. It gives a positive grip that aids primary extraction on a straight-pull system. The bolt body is cylindrical and runs smoothly, there’s a plunger-type ejector and a claw extractor gets a good grip on spent cases.

The safety catch is on the left of the action, push forward to FIRE and back for a SAFE and the bolt release catch drops through the action just in front of the trigger blade which looks a bit odd. As you would expect on a rifle of this quality the trigger is superb, adjustable for length of pull, weight and let off, it’s set at 2 lbs weight with zero creep and breaks like glass.

The Hunter model has three grades of quality walnut with sporter styling but the Target only offers a laminated thumbhole style that handles superbly. It’s deceptively light with left hand versions also available. I also really like the grey black laminate that looks great and is practical, let`s face it, especially where I do most of my shooting in Scotland.

The full forend is nicely stippled as is the upright pistol grip not checkered which on laminate is better. There is an adjustable cheekpiece as you would expect on a target stock that allows adjustment for height with four locking screws and a little bit of cant too, which will aid cheek weld and general fit!  There are two accessory rails for a bipod or a sling, although I fitted sling swivel studs on the left side so the rifle sits flat to the back when stalking.

There is no bedding material but there is a solid 8mm cross bolt recoil stop through the stock in the mid section where the recoil lug rests. The fit and finish is superb and artificial bedding would be superfluous anyway.

All the standard cartridges are catered for but I chose 6.5x47 Lapua due to its excellent performance! In my opinion it has to be one of the best all round calibres for British shooting available. Lothar Walther barrel blanks are used and then extensively hand-machined to contour and chambers are precision reamed in house with the muzzle being threaded for a 17x1mm with spigot.

In this way each rifle is actually all individual and in fact custom made. Harri uses Chrome Moly barrels not stainless steel as one might expect, the reason being that sometimes stainless tubes need a little running in to achieve best accuracy, whereas Chrome Moly of this match grade type are ultra smooth and ready to shoot from the off. Feed is from a steel, 10-shot, detachable magazine so an excellent on-board capacity as standard.

Factory ammo is limited with just two options available; both using Lapua’s Scenar Match bullets with the 108-grainer’s travel at 2841 fps/1936 ft/lbs and a 123-grain version at hit the 2711 fps/2008 ft/lbs. Three-shot groups came in both weights came in at sub-3/4”! However, reloading is my thing and part and parcel of owning a firearm.

Accuracy with reloads proved even better. I used a Redding Type S Match Die set to reload the 6.5x47L with a full-length version with replaceable neck bushing. In that way you can match the neck diameter and alter neck tension on the bullet with differing replacement bushings. I used the 0.288” Bush and it is important to choose the full-length resize die not the neck-only version as primary extraction can be tough on some straight pulls, so this full length die negates any problems. The other die is the Micro-meter topped seating die to give excellent precision in seating your different bullets to altering depths.

A light fox load with Sierra 85 grain hollow point chronograph 3057 fps/1764 ft/lbs with a load of 35-grains of Vit N133 although another batch of the same bullet was only 2851 fps so check bullet diameter before use. Another and/or long range varminter is a 108grain Scenar with 34-grains of Vit N133 giving 2809 fps/1893 ft/lbs and has harvested foxes that thought they were out of range.

Out in the field this accuracy is translated into utter confidence in the rifle’s ability to hit your quarry at whatever range you choose. I ran the data through Quickload Ballistics program to get an accurate trajectory drop and windage compensation, armed with this and a Jet-Z Compact moderator you can take the 6.5x47 L right out to 1000 yards if needed. On vermin I stuck to 500-750 yards in Scotland and scored some instant one shot hits with the top end 123gr Scenar load, those Lapua Scenar bullets are really wind slippery. The stock is a perfect platform for shooting prone off a Harris bipod and that big old gear stick quickly gets another shot off as the first round hits home.

I also set up balloons out at 600, 700, 800, 900 and 1000 yards on long string tethers which gave a good indication of wind conditions in Scotland and were seriously good sport to try and hit. The Lynx devoured them with ease, only the 900 and 1000 yards proving tricky, I always have a problem with wind!

The Lynx armed with the Nosler 120 gr Ballistic Tips travelling at 2789 fps, not max load but proved laser like in their precision and performance on Roe harvesting yearlings and some cracking bucks over the last year. It may look long and heavy but the Lynx handles and points really well in the woods and fields.

In conclusion what you have here is a pure custom rifle but only at a top end factory price of £3450, offering a unique action design, superb build quality and astonishing accuracy. Over the year it`s proved unerringly accurate and precise in its ability to deliver copper and lead at extreme ranges.