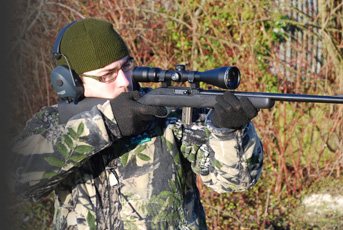 In the UK we mainly perceive Marlin as a name associated with lever-action rifles and of these it’s the pistol-calibre 1894 that we know best. However, this company also offers centrefire bolt-actions and the full range of rimfire options. This month I have their Model 795 semi-auto to play with courtesy of the new importers Edgar Brothers Ltd.

I have to admit that I am not a fan of 22 semis for hunting. Yes I admire their fire and forget action, which does allow for fast back up shots and multiple targets. But for me reliability is all and I have had more problems with most 22 semis I’ve taken into the field over the years to make me favour a bolt-action. However, let’s not pre-judge the Marlin.

The 795 is very typical of the genre with a straight, blow-back action and 10-shot, single column box magazine. The receiver is alloy and shows an integral, ½” base for scope mounting. The stock is a black synthetic with cast-in panels of chequering. The pistol grip angles back easily into a low butt with a slight, ambidextrous comb. The forend is rounded and long enough to offer a good hold, QD sling suds are fitted as standard.

The barrel is 18” long and of a medium/heavy build and comes fitted with iron sights, the weight of this tube for a 22 rimfire is certainly going to aid performance. Up front is a fixed blade with a U-notch, elevator wedge at the back. Basic yes, but good enough for 50-yards or so! Edgars have the muzzle threaded 1/2x20 UNF at factory and a screw-off collar is included.

Though apparently basic the 795 shows a level of sophistication not found on all other semis of this type. Controls consists of a well sized and shaped cocking handle on the right that reciprocates with the action. The safety is your standard, cross-bolt type in the rear of the trigger guard; it pushes right to left for FIRE where it shows a red band.

The mag catch is a simple, pull back lever at the rear of the well, which does require two hands to operate as we shall see. The magazine is nickel-plated, well made and reliable, it shows an orange follower and witness holes to check capacity, plus offers an automatic last round hold open facility.

This is further augmented by a manual bolt release/lock catch (right/front) on the trigger guard housing. Marked OPEN (push up) to allow the action to be held back without a mag in, or pushed down (CLOSE) to trip the bolt and chamber the first round. This is a nice feature and one not normally seen on rifles of this nature. My personal views on 22 semis aside this is a neat and well designed general use rimfire.

I must admit to having to really search to try and find some ½” rings as they are not what I use, but managed to dig out a set. Into these went the new Vortex Diamondback 3.5-10x50 from Marchwood, which was on my testing list anyway. Ammo was kept in house with Remington sub-sonics and their high velocity hollow point, two very standard and representative loadings for the sort of work this gun would be put to. Up front went an SAK moddy from Jackson Rifles.

I’m no small guy, but in the shoulder I found the 13 ¾” length of pull more than acceptable. Likewise the pistol grip was hand filling enough to give a decent hold and the small comb gave a good eye/scope position too.

Starting off with sub-sonics the 795 chewed through 50-rounds without any problems, likewise switching to the faster high velocity showed identical characteristics. The single column magazine and generous feed ramp doubtless aided reliability too. Typically the bolt face showed twin extractors, which I have found aids function in this area.

I did however find the mag change awkward as you have to support the rifle in your right hand and at the same time operate the catch then use your left to pull out the clip. Conversely the last round hold open and auto bolt release really do aid the reload or unload. The 795 comes with one magazine as standard, though spares are under £15 (inc VAT) and I’d definitely invest in one if not two more.

With feel and function established, accuracy was my next concern. Prone off a range bag the Marlin was printing ¾-1” groups at 50-yards, so very much on the money. Likewise with about 4” of drop compensation you could easily be hitting the mark at 100-yards too. The trigger was average to useable though a little clunky and I reckon a bit of tweaking would turn this into a near ½” gun.

I don’t think you will ever convince me that a rimfire semi-auto is as reliable as a bolt-action for bunny busting, so I’ll stick with what I know and trust. However, I took the Marlin out and had no problems thinning down the local rabbit population a little. The rifle points and mounts well, is accurate enough and proved 100% reliable. Price wise it’s a steal at under £240, which is a pleasant surprise these days. To be honest I cannot fault this gun and have to say if you are looking for a semi-auto then the 795 is worth serious consideration…