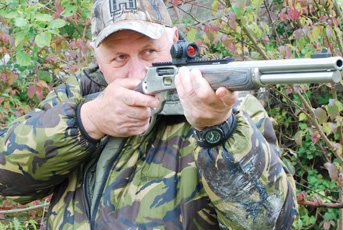 In the UK many see lever-actions rifles as rather old hat, or only for pistol calibres, however in the USA expectations and usage are very different. Two names stand out - Winchester and Marlin - and though the former is perceived by we Brits as being the iconic brand, the truth is they only make special models of their 94, having pretty much discontinued this line. Whereas Marlin Firearms, which technically produces a more practical design offers a wide range of guns that caters from rimfire plinking up to large/dangerous game hunting.

In collaboration with ammunition and reloading giants Hornady new calibres and concepts have been added to what in truth are designs in excess of 100-years old. Two that stand out are the 450 Marlin a belted magnum and Leverevolution ammo, with its unique ‘flex tip technology’ that gets over the main problem of the tube magazine these rifles use. Up until this break through you could only use flat-nosed bullets, as a pointed-style would rest point-on to the primer above it, with recoil causing the potential of a chain detonation. Saw that happen once; it impressed the hell out of me…

Flex tip offers a ballistically superior (pointed) bullet, with a soft, polymer nose, which takes these guns from their short range slot and gives them some serious legs for longer distances. I have tested Marlin’s MXLR in 450 Marlin and it was impressive! However, the gun on test here uses that classic cartridge the 45-70 Government, which first appeared in 1874, so making it 138-years old and probably more popular than it ever was.

Marlin’s original big bore was the 1895, chambered in 45-70 and latter in 444 Marlin it offered a blued finish with walnut pistol grip butt, 22” barrel with 4-shot tube magazine and QD sling studs. The receiver is closed topped and side ejecting with a cross bolt (hammer block) safety catch and is drilled and tapped for scope bases, traditional iron sights are also fitted. In 45-70 this rifle was sought after by professional hunting guides and it became almost ‘the rifle’ for Alaskan use. However, it was a bit too long!

Marlin then introduced their Guide Gun, which was effectively a cut-down 1895 with an 18 ½” barrel and straight-hand stock. This recipe proved even more popular and Marlin continued on this theme with a number of shorties and their stainless and grey laminate XLR and MXLR series (450 Marlin) with 24” barrels, purpose designed for the Hornady Leverevolution ammo…

The culmination of these new materials, ammo and size requirements is currently the 1895 SBL (stainless, big loop), which Marlin says is: “Destined to be a top choice of North Country guides.” The SBL is slightly different in terms of layout and offers provision for a number of optics and has also upgraded the iron sight package.

From the box the SBL has a decided wow factor with its grey laminate furniture and stainless steel metalwork and is very much built for purpose. This being a short, compact, heavy-hitting and fast handling carbine. The 18.5” barrel shows a .75” diameter at the muzzle and the full-length mag tube give a capacity of 6 + 1. The forend is rounded and quite long, so plenty to get hold of and is finished with an end cap with a QD sling stud. The butt again is not skinny with a long and sloping pistol grip finished with a plastic cap. The length of pull is shortish at 13.5” which is probably done for the fact you will be wearing heavy clothing. It’s finished off with a stout, rubber recoil pad and a second QD stud, chequering is applied in the usual places.

The action is standard 1895 with a cross bolt, hammer block safety and a 2-position half and full cock external hammer. Loading is by a gate at the forward/right of the receiver and the bolt is grooved doubtless to improve operation in adverse conditions. Marlin included a day-glow orange magazine follower too. Compared to the standard rifle there are two major changes. First there’s an 11.25”, Weaver-type Lever Rail on top of barrel and action, secondly the traditional elevator wedge, semi buckhorn and ramped front blade have been binned. In their place is a removable, fully adjustable XS Ghost Ring aperture at the rear and a heavy, fixed blade on a block up front. In terms of usage this gives faster acquisition and an improved sight picture for when irons are required.

The operating lever is also noticeable due to the fact it’s what Marlin calls a ‘big loop’. Unlike the normal layout with a rectangular shape, this is more bowed and had been done to allow easy use even when wearing heavy gloves. Yet again a nod to the fact this is probably aimed at more cold weather use. At first I was not sure about the shape but in truth found it more practical than the original.

General build is good though I was not that impressed with the gap between the butt and the rear of the frame, which in some places was 1/32”. With a heavy recoiling round like the 45-70 I was concerned about stock cracking. I would have thought that Marlin could have either dimensioned it right or put some filler in there. But that aside the SBL is one cool looking and very handy design and it’s no wonder the generic 1895 has become such a respected rifle by professional users.

The 45-70 has never been a quick round but the Leverevolution gets the best out of it with two loadings. I was sent a 250-grain Monoflex quoted at 2050 fps /2345 ft/lbs, there also a 325-grain GTX, which gives 2050 fps/3020 ft/lbs. Energy is good though the 250 by the time it has reached 100-yards is down to 1500 ft/lbs. However, it’s a big pill and should easily dispatch pretty much anything easily and remember for some these guns are mainly for defence against the big bears, so it has enough grunt. However, I’d go for the 325 as it carries nearly a third more energy!

For the test I went with three different sighting systems. For glass I put on my Leupold VX-7 1.5-6x24, which is a classic-type DG (dangerous game) scope but in a more modern build. Good up close and equally effective at x6 out to 300-yards. This would be my choice, or similar, however, the SBL would also suit an intermediate eye relief (IER) scout-type unit too. Next for really close and quick encounters an Aim Point Micro red dot. Small and compact it’s probably the best of the dots out there. Then there’s the issue irons. The large rear aperture (ghost ring) combined with the heavy blade with a white, vertical stripe act very well together and can be easily used with both eyes open. I also fitted an Eagle Shooter’s Stock Pack (butt bag) to take some of the sting out of recoil on my cheek.

I did encounter one problem when fitting the scope as even in medium/high mounts the base of the eyepiece bell fouled the ghost ring which had to be removed. This was easy to take off as it uses a slot headed screw. However, for serious use I’d pick an extended eye relief scope like Swarovski’s 1-6x24 (EE) DG model in QD mounts, so I could access the irons quickly.

For me the SBL would be primarily a boar rifle; short ranges, fast targets and massive knock down power and with the Micro onboard would prove effective. Plus ease of topping up the magazine as rounds can be thumbed in as required. At 8lbs, say 9 including scope, the SBL is a reasonably heavy rifle, which is good as big bore carbines can be a bit brutal in the shoulder; certainly with heavier bullets.

The trigger was really heavy probably tipping the scale at 8-9 lbs and initial grouping proved difficult… However I found a technique and on average it was shooting 1-1.5” at 100-yards with some effort, however, very good for the old 45-70! Over the chrono the load averaged 1997 fps/2245 ft/lbs, only dropping 53 fps from the factory quote – not bad. You might think it does not compare well to say a 300 Win Mag and on paper you’d be right, but it scores in throwing a big and heavy bullet, which even at modest speed/energy does the damage. Which is something I can attest to!

Recoil was acceptable if a little vigorous; lean in, hang on tight and squeeze! You do have to also consider getting scoped if you get your head too near the eyepiece. The action was initially a little stiff on chambering but soon wore in and there were no problems with primary extraction either as the gun got hot. Unlike the 450 Marlin, which does get a bit hard to open after five rounds of rapid fire. If you have a need, which really means fast and handy fire power then Marlin’s 1895SBL is one hell of a tool!