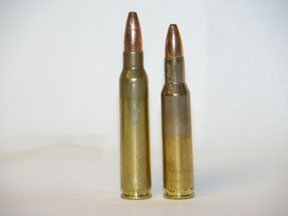 Please note this is a three part article, you can read part two here and part three here.

The concept of a switch calibre rifle that by means of swapping barrel, bolt and magazine gives the same gun but for a different role has always fascinated me. Over the years I have played with a few, such as the Blaser R93, Merkel KR1, Sauer 202, RWS Titan and Sako QUAD, though in all cases the acquaintance has been reasonably brief. In this short time you can get a feel for the rifle but perhaps not the plus and minus points of what it really offers, which can only be ascertained by proper long term and every day use. Such a chance came with an unexpected phone call from a gentleman called Robert Sajitz of Mauser.

Robert started off the conversation by saying that he had read my work and knew that I was no fan of wooden stocks in general. I jokingly replied that as far as I was concerned, and with a few exceptions, wood was good for two things – looking at and burning… Ever the diplomat, as can be seen, we got off to a good start! He went on to ask me if I was familiar with the latest Mauser design - the M 03.  Yes I had borrowed a wood-stocked gun from the importers (Beechwood Equipment) a few years ago. As I recall I found the rifle acceptable, but could not get a real impression of what it offered due to the short time that I had it for. Plus with no second calibre set up, its major selling point was a bit lost on me…

He then went on to inform me that the M 03 was being offered for 2007 with a synthetic stock (The Extreme) and would I like to borrow one for an unspecified period of time? This was the perfect and long awaited opportunity I had been looking for, as I could pick two calibres (barrel sets) and really get down to some serious deer and fox bashing to see if the old axiom of beware the man with one gun was true. This would also fit nicely into any number of roles, especially when hunting overseas, as by taking the second barrel/bolt system you can in effect take two rifles for large game and vermin. Or different calibres to suit specific species. So the M 03 Extreme seemed to be a potentially perfect solution.

As I said before, this is not a gun test, more an introduction into the M 03 system and design and some thoughts on the switch barrel concept in general. I will be doing my usual ‘nuts & bolts’ review at a later date, once I have got a few miles on the clock, so to speak.

My first thoughts were what calibres and barrel lengths would I need; the M 03 is reasonably flexible in terms of choice. As the gun was likely to be going overseas and maybe even Africa, and was to be used for all manner of game in the UK and hopefully Europe, I wanted something capable and flexible though not too large. I already have my Winchester Model 70 Custom 300 WSM (Africa #2), which as I explained the other month is my big hitter and the WSM is perhaps a bit too much for most UK deer species. So I decided on my all time favourite .30 cal the 30-06 Springfield in their standard 32.5” hunting weight barrel.

The 06 strikes me as an excellent compromise, though big in the shoulder it’s more capable and less snappy in recoil than a 308 Win. Loading it up and down on the bullet weight/power bands also gives a good gun from muntjac to kudu. I would probably get a muzzle brake fitted, as I have found that the extra control afforded allows you to keep sight of the game as you shoot it. So if it runs then you can see where it’s going.

Ammunition choice is yet to be finalised, but I was thinking around the 180-grain mark for larger species and Africa. In the UK the majority of my prey would be muntjac, roe and fallow with maybe the odd red. So I would drop down to something around 150-168-grains in a soft or ballistic tipped build. In the past I had had great success with Hornady 168-grain A-MAX in my 308 Win and building something similar was another option.

With wild boar the premium 180-grain route would be good, as would be the 220-grain Sierra Game King. Big and slow, this round nose soft point is quite some bullet when you really need the metal to hit the meat! Since the news of the M 03 I had been getting in a good cross section of 30-06 ammo and bullets so I can try both factory and reloads.

My second calibre choice was 223 Remington, as I like the cartridge and know it’s a good choice for varminting at normal ranges. Light in recoil and easy to moderate, it will also be allowed for muntjac and CWD by the end of the year in England and Wales and maybe roe too, if we are lucky. Some might say why not 22-250 Rem? Yes another good choice, as might be 222 Rem etc. But I reckon 223 will do what I want of it…

In this case the 223 barrel was factory cut at my request to 20” and will be fitted with a Wildcat LW200 moderator. With its 1-10” rifling twist I was planning to use 55-grain bullets, though I would try weights above and below this figure too. Again, like the 06, I had not decided on a make and might even go the reloading route.

When it comes to rifles in general I have very strict requirements; paramount among these is the gun’s ability to shoot tight groups. I have to say this stems from my first, modern deer gun which was the Remington 700-based, Light Sporting Rifle (LSR) as offered by Riflecraft Ltd. With 44-grains of Vit N140 pushing a168-grain A-MAX load, this semi-custom gun would shoot ½” @ 100 yards off the bench. OK 8-10 rounds later this had opened up due to excessive barrel heating, but this is normal and to be expected. But as I have never had to shoot that many deer at one time it was not a problem either. I would further say that such good performance spoiled me and perhaps makes me over critical of anything that won’t give those sorts of numbers. A ballpark figure of an inch would be more realistic for a standard factory rifle, which the LSR was not. Much more than that and I do start to worry, certainly when longer shots are involved… OK the BDS reckon that four inches at 100 yards is an acceptable group size, frankly I don’t even consider that a group!

With this my first real chance to test out a switch barrel hunter properly, my major concern was performance due to the ability to change major components of the design. So on the one hand the concept of taking what amounts to one gun and a spare barrel out to do two jobs is highly attractive – same feel, controls and trigger, etc. But on the other there’s the niggling doubt in the back of your mind of; has everything gone back together in the same relationship?
Then optics comes into play, as you have two choices. First you can pick one scope that will address both needs and simply zero one barrel, then the other, noting the differences and applying them accordingly as you switch between calibres. Second you can opt for two sets of mounts and therefore not have to compromise on glass, with something like a 3/4 - 9/12 x 42/50 for deer and a 4-14/16 x 50/56 for varmints.

On the matter of scope choice I will be using the new Swarovski Z6i, 2-12 x 50 with their TDS 4-1 reticule for the large game role. As of yet I have not decided upon a varmint optic, though I do have a couple of makes/models in mind. However, if I wanted to keep weight to the minimum the Z6i with its generous 6x zoom range could in effect do both jobs, providing of course the ballistic difference between 30-06 and 223 in terms of point of impact could be accommodated within the available turret adjustment. Mauser kindly supplied me with three mounting options - 1” and 30mm ring bases and one for the SR rail of the Swarovski.

The M 03 uses a near identical barrel securing system as the R93 Blaser, with two fixed studs at 6 o’clock on the chamber section that drop down into a forward/inner steel chassis member and is secured by twin, captive screws. Mechanically this system looks good as the forward chassis member is actually an integral part of the receiver, so once everything is together you have in essence a solid design, much like a fixed barrel gun.

Also, like the R93, the Mauser uses a dedicated QD scope-mounting system, but this attaches to the top of the receiver, as opposed to directly on the barrel as the Blaser. This, as I discovered, means that you have to remove the scope before you can lift the barrel off, whereas the 93 allows you to take the scope/barrel off en-bloc. So in terms of build the M 03 system means that to change calibres you have to take the scope off and re-fit it every time. As can be seen, this sort of build is a necessary compromise if you want to go down the one gun/multi-role route. Merkel’s KR1 is similar with QD mounts; however the Sauer 202 and RWS Titan use standard claw-type bases and a pull-forward barrel system that’s held by a split clamp at the front of the receiver. This makes changing optics more basic and for that matter a near mandatory zero check if you do…

One of the nicer aspects of the M 03 is that it comes in its own lockable carry case; here the rifle can be stripped down with barrels, stock and scopes etc., all individually compartmented. Having spent many hours dragging my excellent if large Pele Travel Vault around international airports, the hand-held Mauser case is compact, lighter and far easier to handle.

One slightly unusual aspect of the M 03, and again like the R93, is the fact that it uses a cocking/de-cocking lever, in place of the more accepted safety catch. A safety as we know it on most US-made rifles is a simple ON/OFF switch, which leave the gun cocked at all times. Not so the de-cocker, and as the name implies the action is not ready to fire until you re-set it. This, as I have been discovering, is slower and not quite so handy in operation - especially when you need a quick shot. However, it does offer advantages in terms of 100% safe carry and loading/unloading drills. Like the rest of the M 03, there are areas I would need to get my head around, and as can be seen a European switch barrel rifle is definitely different to a US fixed barrel design.

Please note this is a three part article, you can read part two here and part three here.