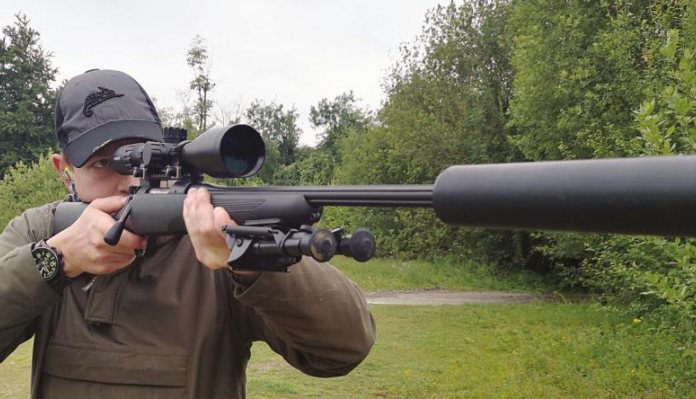 I was lucky enough to go hands on with a Mauser M12 Impact, albeit very briefly, shortly after it was launched back in 2013 and it shot some impressive groups! Originally, it was only available in .243 and .308 Winchester, later they added 30-06 and 6.5x55. Soon after that came an all-black version in .308 and .243. I decided to have a look at the latter, as it’s a bread and butter calibre in the UK and represents a strong contender in the popular £900-£1500 deer rifle bracket.

Specifications for a rifle suitable for deer stalking differ considerably from those that need to perform on the range. Compromises are made on calibres, twist rates, weight, stock design, barrel length and profile, all of which can and do effect performance. The story of how the Impact came to be has been well documented, born from a demand for a rifle that could do both. The theory was proven, with the .308 hitting targets out to 1000m, followed by the 6.5x55 achieving hits at 1500m! Two headline grabbing performance indicators that quickly made it popular. However, as 243 is not considered as a target cartridge, the rifle on test will no doubt sit firmly in the stalking/foxing stable, while still bringing the M12’s inherent accuracy potential with it.

From the box, it is evident that the M12 is built! To this end, the action and barrel are manufactured from stainless steel and finished with a black Ilaflon coating, which can be found on all the steel components including the trigger guard/bottom metal. It offers protection from the weather, corrosion, bumps and scrapes, making it an ideal addition to a stalking rifle!

The action is the usual German quality, with six locking lugs giving a 60° bolt lift angle. The handle is 3” long with a 20mm diameter, cone-shaped knob, providing great leverage and smooth operation. I like these feature, as they add up to a robust and quick reload. It can be easily removed by pressing the release button, rear/left of the action. The bolt face shows an extractor and a pair of sprung plunger ejectors, which kicks the brass out no matter how slow or fast you operate the action.

The 6-groove rifling shows a 1-10” twist rate, which is pretty standard for the calibre, making it suitable for a wide variety of bullet weights from 55 -100-grains. Barrel length is 21.5”, an important consideration when choosing a .243, as it plays a key role in muzzle velocity and therefore large deer legal energy levels. In the UK, the minimum energy required by law is 1700 ft/lbs. As expected, the tube is free-floated all the way to the re-enforce, it shows a medium profile, which tapers gently down to a 16.95mm diameter at the muzzle. It is fluted for the majority of its length to help shed a bit of weight and to aid cooling. It is threaded M15x1 for a moderator, and a metal thread protector is included.

The safety consists of a 3-position lever mounted on the bolt shroud, which is very similar to Heym’s SR21. It offers forward - FIRE, middle – SAFE with bolt operation and rear – SAFE bolt locked. There is also a cocked action indicator at the rear of the shroud that protrudes, displaying a bright red button. This is all hooked up to the Mauser’s trigger and what an excellent unit it is! I have fitted after-market units to several of my rifles and they always unlocked further accuracy potential.

I was pleased to find a near perfect factory example on the M12, which includes a curved blade at a nice width, just under 1cm, offering a clean, creep-free break at just over 2 lbs. The guard is also big enough for winter gloves, which is a bonus. The detachable 5-round magazine is based on the proven MO3 design, although this one is made of a tough polymer. It can be top-loaded with ease, due to the large, easily accessible ejection port. It is also sprung, so ejects when you press the recessed release button at the front of the well, which reduces the chances of losing it while out in the field. All these small details are welcomed on a stalking rifle.

Harking back to the MO3 Extreme design, the M12 stock shows a moulded polymer construction, and is not only light but pretty rigid too, keeping the barrel free-floated, even when used with a sound moderator and bipod. This is a quality not always encountered on other makes of rifle, so kudos to Mauser for this one. It also has a pleasant, rubberised texture, along with integral, impressed chequering panels on the pistol grip and forend, providing excellent hold. Including the rubber recoil pad it has a length of pull (LOP) of 14.5”. It comes with three QD sling studs fitted, with one at the rear and two up front, one of which is in the forend tip. Overall, it appears simple to look at, but during use represents a particularly well thought out, ergonomic and ambidextrous design. Inside the action void, I was pleased to find an aluminium pillar at the rear and a shaped steel insert up front, two substantial components to hold the barrelled action securely. It should have no problem shooting straight!

For scope mounting, the stepped receiver bridges are threaded to accept Mauser-type bases. Popular choices will include; QD HexaLock mounts, 2-piece Picatinny/ Weaver, or the one piece 20 MOA rail that came fitted. Also supplied, was a Minox ZX5i 3-15x50 which was easy to fit and, with its illuminated German #4 reticle, makes a good choice for any deer stalker.

Some optics can be tricky to zero at 100m when using a canted one-piece rail, as they can run out of elevation adjustment, but I had no problems. Moderation came from a Barton Gunworks can and support from my Harris BRS bipod.

As with any new rifle, it is always wise to test a selection of ammunition to see what it likes, so I sourced Remington factory fodder from the importer Raytrade UK Ltd. Premier AccuTip (AT) in 75 and 95-grain, High Performance Rifle (HPR), Protected Soft Point (PSP) in 80-grain and Core-Lokt PSP in 100-grain. All in all, a pretty stable diet for a .243 in the UK that covers its primary uses for fox and deer.

It is always interesting to see how a rifle performs from the box. My tester was new, and I was keen to see what energy levels and accuracy could be obtained from its 21.5” barrel. Straight away, I printed a 0.55” group at 100m with the 80-grain HPR, which is a good start! Factory figures suggested a muzzle velocity of 3350 fps and energy of 1993 ft/lbs, while the Mauser managed 3116 fps/1725 ft/lbs (see ammo table). This means it just about scrapes in at the large deer legal limit, but with accuracy like that nobody should have any problems filling the freezer! I found that the 100-grain Core-Lokt produced another 140 ft/lbs of energy, but with worse trajectory and accuracy, it wouldn’t be my choice! When testing the AccuTips, it became clear that the M12 preferred the lighter bullets. The 95-grain producing a 1.2” group, while the 75s, a very popular choice in .243, a nice 0.72”. So overall, some decent results from just one brand of ammunition.

At a glance, you could say that the rifle looks a bit of a plain Jane, but as I soon discovered, it’s all in the details. The synthetic stock is precisely made, ergonomic, solid and the bedding method works well. The trigger’s 2lb pull was a real pleasure to use, breaking clean, crisp and light, but with you in control. The action and magazine feed, combined with the extended bolt handle worked well, with the powerful pair of sprung ejectors making it 100% dependable. The safety catch, along with its ability to lock the bolt is a nice touch; however, I did find it a little bit noisy and clunky, but maybe it will loosen up with more use.

The Ilaflon coating mustn’t be overlooked, as it’s an effective finish that will keep the rifle rust-free, whatever the weather. Some other makes have some pretty mediocre finishes by comparison. Finally, the performance is all there, especially accuracy. Regarding energy, the barrel would almost certainly speed up with use and other brands of factory ammo, or even homeloads will give different results. For me, it ticks a lot, if not all the boxes for a stalking rifle and I wouldn’t hesitate to recommend one. The current RRP is £1425, which is a considerable jump from what they were; however, research showed they go for about £1150, which makes them more expensive than some of the competition, but overall very good value. Thanks to Raytrade UK for providing the Remington ammunition for this test.