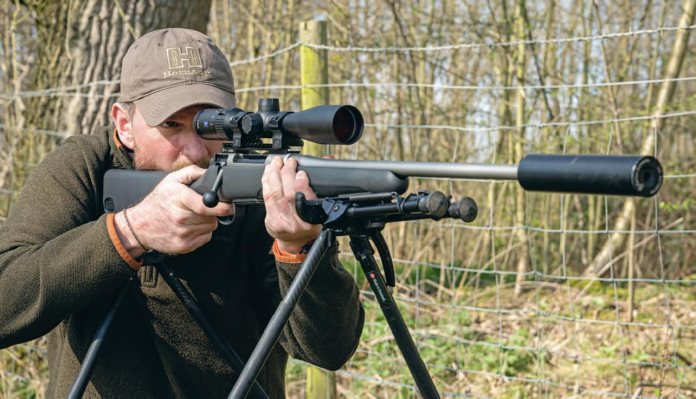 The latest update for the M18 rifle is a full stainlesssteel variant that seeks to improve long-term durability in an already ideal tool for the UK. This rifle starts out with an elegantly profiled, 22” hammerforged barrel with a neatly crowned, 17mm diameter muzzle that includes a 15x1 thread. This swells to 28mm, threading into the 35mm external diameter of the action. Screw holes are sited atop the receiver bridges for scope mounting.

The rifle’s bolt shows a 28.5mm spherical polymer bolt knob that caps a 70mm handle. It can be flicked open with the back of your fingers through its 60º arc to rest straight out of the side of the rifle, for what I consider superb bolt ergonomics, keeping hands and fingers clear of the scope, never struggling to open the action with a tight case and cycling the push feed action lightning-fast without jams.

Single rounds sit alternately left and right in the 5-round polymer magazine - it’s a fine unit. A recessed button drops the mag cleanly into your hand and re-insertion is snag-free. Rounds clip directly in from the top and this can also be achieved with it in the gun.

The 3-lug bolt shows an extractor claw recessed into the right lug, with twin plunger ejectors sited top and bottom to fling spent cases up/right out of the ejection port. Primary extraction is assured if you get a tight case from the action’s fundamentally strong leverage. Regardless of cost, it is one of the finest designs I have used on a sporting rifle, with just a single raceway on the upper left side of the 20.4mm bolt shaft to retain rotational alignment in the receiver body. The bolt stop on the left side of the action’s rear bridge runs within it. Mauser has avoided the ultra-long bolt handle, which is generally a false prophet in this context on a sporting rifle. I have run M18s in tough conditions, and it balances tolerances with all condition functionality very well, plus won’t jam even when actively encouraged to do so.

Mauser’s curved trigger blade is 8mm wide. Its smooth matte black surface settles nicely onto your index finger pad within a spacious guard suitable for gloved fingers. It’s adjustable and the trigger weight on this rifle was measured at 890 to 915-grams throughout the test.

The safety catch on the right side of the action enables FIRE in the forward position and SAFE at the rear. The intermediate stage enables bolt operation with the trigger locked. The catch is quiet in use so won’t disturb game when accidentally flicked off carelessly.

Stripping the action from the stock shows its cylindrical profile carries twin studs on the underside, with a recess for the recoil lug. This is fixed into the stock and mates with the action’s underside slot. The fit is good, with no discernible stress to the inlet. The gap between the stock and barrel was even and parallel on either side.

Stripping the gun for an emergency deep clean is straightforward, with the two fixed studs locked in place under the action bridges using 4mm Allen key nuts. No separate floorplate is involved, as the trigger guard is seamlessly incorporated as part of the moulded stock’s profile. When deliberately bumped and wrestled, it shows no movement and certainly hasn’t snapped on the one I have been dragging about for 4 years.

M18 stocks are a copolymer moulding with softer inlays at the grip and forend. It’s free-floated around the barrel and remains so from any shooting position with satisfactory stiffness to retain barrel spacing. Two studs are fitted front and rear for bipod and/or sling. The forend offers assuring hand positioning with enough space to separate gloved thumbs and fingers from the barrel. A modest palm swell is apparent on the ambidextrous grip, with a slight lip to the base.

The comb angles upward almost imperceptibly, rising toward the butt pad’s heel, and this subtle profiling reduces the felt recoil transferred to your cheek. It’s slender in width and although not particularly high, fills the space available on what is a sporting rifle. Importantly, it doesn’t rumble or resonate on firing and it fits under your cheekbone for an upright head position with a level eyeline. A 25mm thick recoil pad is fitted to the rear, with catches on either side of the 45mm body. Squeezing the lateral buttons together allows removal, revealing a small space ideal for a pullthrough or similar. Contrary to my first thoughts 4 years ago, I haven’t accidentally lost one of these, so will consider it a valuable feature. With this 25mm pad, the length of pull is good at 14.25”. It is ideal for me at 5ft11, allowing easy reach to the bolt handle and grip/ trigger blade, with an 85mm reach from the grip’s peak.

I want to confirm an MOA standard from three shots in a sporting rifle and no more. An obsession with tiny groups regularly overwhelms more interesting details about rifles and the Mauser is no different. I have shot some absolute tack-driving guns that are otherwise horrible in use, from either the bench or in the field, so once confirmed as marketable, I’m solely concerned with the way the gun fits and copes with human interaction.

So, how easy is it for everyone to get that magical MOA? Well, the trigger is not quite ‘match’ crisp but 95% of the way there and totally predictable. The felt recoil is modest for calibre (.308) and you don’t have any hassle at all from magazine misfeeds or bullet damage as it enters the chamber. Similarly, primary and secondary extraction, plus ejection, were problem-free with the range of ammunition I used through the gun. .308 Win is always an easy cartridge to live with and although some want the latest BC magic machines with more long range capability and less recoil, I’d bet my dinner on a 308 any day for ease of ammunition availability (factory or handloaded components) almost anywhere you choose to shoot.

With a moderator, the recoil is manageable for most people. The M18 directs recoil in a linear fashion with minimal muzzle jump and the 22” barrel keeps flash and any excess blast to a minimum (mod or not) and muzzle velocities remained close to published figures. Because the mag holds 5-rounds (plus one in the chamber if desired), I ran 5-round groups to give the Mauser a tougher test and was still very happy with the results from this light gun.

I have used an M18 in 243 as a foxing rifle ever since they were launched and found it to be a very honest and reliable gun. It’s a rifle that will handle the knocks and bumps without complaining or losing zero. Even the blued model has held corrosion at bay incredibly well on encompassing damp nights with guns brought from the cold back inside with consequent condensation on every surface. I don’t want to mistreat a rifle, but I like a gun I don’t have to cry over if it gets a scratch. I still find the M18 bolt one of the fastest in the business and can’t jam one.

There’s no fumbling trying to align magazines in the well, it just slips in and clicks. I wonder if Mauser will make a left-hander because they don’t seem to offer this as an option elsewhere but at least this gun is comfortable when shot from either shoulder. Expensive rifles are very nice but the rifle for every man is what Mauser stood for and I think still delivers, I’m far pickier than most people when saying that but it’s one I still turn to through choice without regrets.