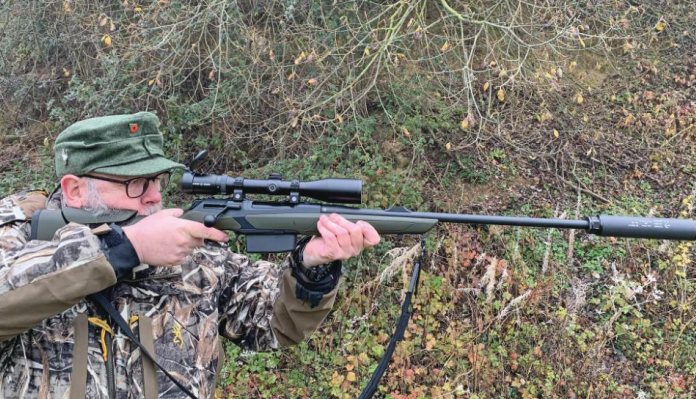 As a German gunmaker, Merkel has always been seen as more traditional than ground-breaking, and amongst their single, double, and even triple rifles, their one modern design was the KR1 turn-bolt. Nothing wrong with it, but I’ve never been a fan, you know how it is? However, in 2010 at IWA they launched a new concept with the HELIX. In a straight-pull market still dominated today as it was back then, by Blaser’s old R93 and latter R8, it offered a radically different and interesting alternative.

At the time of launch, Merkel kept it very mysterious and that caused a lot of interest, equally so when the HELIX finally saw the light of day. It was rumoured that the concept was from an Arab Prince who conceived the idea of the ‘ultimate’ hunting rifle and approached Merkel to make his dream come true.

I’m no stranger to the model, as I’ve tested a few over the years and to be honest and though understanding what it offered, I was never that taken by it! And for a few years now I’ve owned an R8 with few complaints. However, at a recent Viking Arms (Merkel importers) rifle day I got to go hands-on again and found that perhaps I’d misjudged the HELIX a bit. The rifle that really caught my eye was the Alpinist, as it represents to me what a proper hunting build is all about, as we shall see.

I suppose the rifle the HELIX most resembles is Browning’s, straight-pull Maral, as it has an enclosed receiver, meaning that the bolt remains inside even when fully open. This is an advantage on a straight-pull as you can maintain your stock weld and shooting position quite naturally, without the possibility of flinching as you cycle the action. Also, it reduces the ingress of debris into the action. Where it mainly differs is the fact it’s a switch barrel/calibre system, with one of the slickest, no-tool, changes I’ve ever seen. Equally pleasing is the top of the alloy receiver features integral Picatinny rail sections as standard. Blaser’s R8, by comparison, requires you to buy a QD mount for scoping up, adding around an extra £400 outlay.

The bolt layout is again Maral-like, in fact, both rifles use a multi-lugged, rotating head, cammed in and out of engagement by the movement of the carrier sleeve. The cocking handle is nicely angled down and back with a big ball end. However, and most unusual is the 1 – 2 mechanical advantage that allows a short action stroke, which is less than the cartridge being fed. Initially, this does feel odd and takes a bit of getting used to, as the bolt stops, and you get the impression it should be going back further. And equally so on the closing movement.

The bolt locks directly into the chamber extension and the receiver is merely there to act as an action cover and provide a place to mount a scope, feed system, trigger mech and furniture. Feed is from a single column magazine in either three or five round options and uses twin locking catches either side of the mag well. Typically European is the tang-mounted de-cocker, near-identical to the R8s. It pushes up to cock and in this position, it is released by pressing the button in its top face where it slides down again. It can also be used to open an uncocked action by pushing it forward just 1/8”.

This being the Alpinist model, it shows a 17mm diameter, 22” light/medium barrel threaded 15x1mm. My tester was in .308 Win. Typically, there are a number of other options, such as semi-weight 19mm fluted with or without iron sights. It offers a handy weight and heft so represents something that carries easily and exudes good shootability. The stock is a composite material with a rubber-like, outer (Soft Touch) skin. It is available in black or green (the latter gets my vote) and consists of a slim, sporting-style butt with a height and transverseadjustable comb. This last feature further aids eye/scope alignment and head position. Pushing the comb to the right allows a more upright position and I have a near-identical system on my Mauser M03, which I have always used to good advantage.

The rectangular/tapered forend is hand-filling and well-shaped and as we shall see, removable. Textured panels show on its sides as they do on the full and comfortable pistol grip for improved hold. I really like this furniture, much preferring it to their newer Speedster style! It freefloats the barrel and has a QD stud for a bipod, but does feel a tad springy, but shooting off the bench showed it was up to the job.

Trigger pull is externallyadjustable via an Allen screw in the rear of the guard, going from 1.98 - 4.1 lbs. On that matter, the mid-width blade is nicely curved, the release crisp with no take up, but it feels soft in operation (much like the Maral) and like the short action stroke takes a bit of getting used to.

Barrel/calibre change is a dream, I say this as both my Mauser M03 and Blaser R8 are also switch barrels and both require tools to do the job, whereas the HELIX does not. It can be accomplished in two ways, either with the bolt head left in the carrier or coming out with the barrel. The only downside here is the fact you can’t really get inside the action to take the bolt body out.

Proceed as follows: if you want the bolt head to come out with the barrel, close the action before removal, if not leave it open. Looking under the forend you will see a button behind the QD stud, press it, and at the same time pull the forend forward and off. Look to the left side of the receiver and you’ll see a long lever, pull it down to the vertical and simply pull the barrel out. You will see the bolt head engaged by two red marks at 12 o’clock, rotate the tail of the head to 2 o’clock and pull it out.

To reassemble, ensure the two marks are at 12 o’clock again and slide the barrel/bolt back into the receiver until it bottoms out and swing the lever up to lock. Guide lugs inside the action ensure it can only go in one way, just be gentle and ensure the chase section goes in parallel. With the action open, repeat the process and this time the bolt head will stay attached to its carrier tube. Slide the forend back on and snap it down until it locks, and that’s that.

For the test, I fitted my old Schmidt & Bender 3-12x42 Klassik scope, Brugger & Thomet muzzle-mounted moderator and a Harris BRS bipod. Ammo went to RWS 165-grain Doppel Kearn (Twin core). Off the bench, supported, the rifle was shooting MOA, which is more than enough, although trying some more makes might improve on that! For me, felt recoil was more than acceptable too and once I got used to the straight-pull action it proved slick and fast to use. Apart from accuracy testing, equally important is the question of return to zero after a barrel/calibre change, as with any switch barrel system. And the Helix did not have a problem keeping the rounds on point of impact after the swap.

General, fit, feel and function were good, although, and like the R8, the de-cocker was very firm in operation. How low you mount a scope also has an effect on manipulating this control, certainly in its up/FIRE position due to limited access to the unlocking button. Overall, a nice rifle and one that I’m glad I revisited.