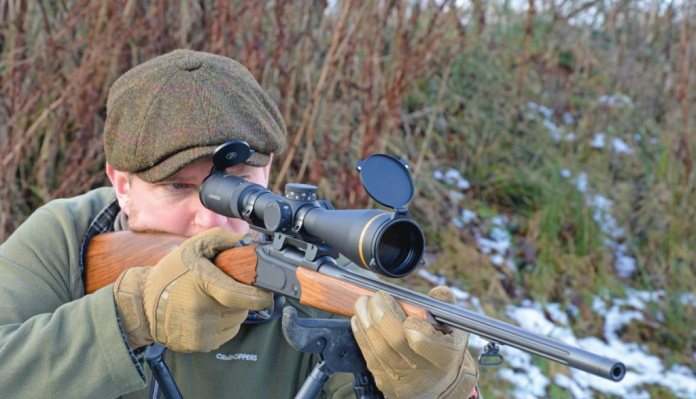 Merkel is well known for the ultra-modern Helix straightpull rifle, but they also produce the K3 break-barrel single-shot rifle. The two couldn’t be more different, with the latter showing simplicity, purity and great looks combined into a slender build for all-day carry with minimal effort.

The muzzle is threaded 15x1 and includes an invisible thread protector. The fluted barrel includes a sling loop which is brazed on and it tapers from 17mm to 22mm as it enters the still slender, 25mm hinged action. This pivots on a single 7.7mm hinge to open and close onto the breech face with an intermediate floating block. This ensures correct headspace for the non- rimmed cartridge brass, ensuring consistency.

Just like a commonly encountered shotgun, the underside catch within the forend enables unlatching and separation of barrel, action and forend for ultracompact storage. Along with the scope mounts and a sound moderator, everything would fit into a case no longer than the 20” barrel, which would slot in diagonally.

There is twin dovetails on top of the receiver for scope mounting using the proprietary reach back Merkel mount with quick-release levers. Viking Arms supplied me with a generously specified Leupold scope that although superbly functional, was a little bit cramped in terms of eye relief and its central saddle limited its position. In fairness to the rifle and mounts, it was the scope at fault, and to my mind, this delicate gun would benefit from a smaller 1-4 or 1-6x scope for woodland stalking, so as not to swamp the delicate handling ergonomics.

Both quick-release levers have opposing T10 Torx grub screws to control repetitive setup tension. These are concealed below secondary T15 grub screw caps to lock and prevent tampering. The whole assembly - here in 30mm tube specification with a 50mm objective lens - remains delightfully low to the barrel and the stock, for an intuitive gun mount.

Like a shotgun, the black action has a top lever swinging right to unlock the barrel. Behind this is a tang mounted de-cocker that slides forward to ‘arm’the action silently. A second push forward unlocks it, allowing thumb pressure to restrain it whilst returning it rearward to de-cock the action. It acts like an automatic safety, so when the action is opened, it clicks rearward to start the cycle over again, making it one of the safest, most reassuring setups going. Even if the rifle were dropped in ‘safe’setup, it can’t fire as there is simply no spring tension in the striker. During a long stalk, a single-shot rifle is more likely to remain loaded, so this feature is reassuring.

A left-sided claw extends to lift the cartridge case out for extraction by right index fingertip, so it is not ideal for left-handed users. It might be worth seeing if this can be specified opposite, along with top lever and stock geometry.

The only example of engraving on the action is the Merkel name and logo highlighted in front of the trigger guard. The gold trigger within the spacious loop features a slight curve to its 6mm width. It’s pull is perfectly crisp with 5mm of overtravel at the tip before the hard stop. I measured the pull weight at 600-grams which is light for a sporter. The small rotating left side lever behind the blade, further reduced this to 450-grams, making it so light that I struggled to weigh it consistently. Still perfectly crisp, but way too light for a sporting rifle, and with gloves on, totally wishful in my opinion. I tend to find ultralight triggers on sporting rifles are a bit pointless, perhaps they are envisioned to assuage those who don’t like to feel the pressure build as they aim.

Grade 4 Walnut is a nice balance between function, price and not appearing too flashy. Although looking tiny, the timber still retained a hand-filling feel, with decent reach to trigger blade from the open radius non-palm swell grip, which includes a black polymeric cap at its base. There is satisfactory room for three fingers to retain a firm hold, and given the light 7.24 lbs weight of the rifle - including scope and mounts - it gets quite lively in recoil so hang on!

Length of pull (LOP) is 14.25”, so you get a good reach into the gun. I found the rifle naturally comfortable with intuitive pointability like a shotgun, plus solid recoil impulse transfer into the shoulder, but pace yourself, oneshot only remember!

The stock shows beautiful straight grain with darker threads running in a diagonal line from the action to the recoil pad toe, and in fairness, handles the recoil well with that dampening feel for sound and pressure only Walnut seems to provide. It’s a hog’s back shape with an overall curve down through the comb to heel. The K3 is intended for vertically inclined shooters standing unsupported or using sticks. Not to say it can’t be shot prone, it’s just that I didn’t!

I’m a bit of a sucker for the term ‘angled curves’ and that’s exactly what the left side of this right-handed gun exhibits on the Monte- Carlo type jawline area of the comb, with a totally smooth finish to the opposing right side. The ‘steps’ in the timber create a nice visual and tactile balance that fits well with modern manufacturing allied to a classically styled gun. I find myself finding it all desirable, with just a slim black rubber recoil pad to retain position in the shoulder pocket.

I know I liked the gun visually and mechanically because the downside is I didn’t shoot it much. It’s very lively and with minimal eye relief on a scope mounted further back than desirable, I had to physically ‘wind my neck in’to avoid that recoil contact as the snappy .308 cartridge fired. I chose not to use an ‘ugly’ moderator but it would have cut recoil significantly.

Three shot clusters on target were a reliable 30-35mm at 100m, but for all the group obsessed shooters, that’s not this gun’s essence. With significant positional shift required to open, extract, reload and close the rifle between shots, regardless of how well rested and retained, it is never going to compete with the simple bolt reciprocation found on a mag fed rifle from an ergonomic standpoint.

I found the gun was most comfortable to shoot, as predicted, in a standing position, especially from sticks, which is exactly what the gun is intended for. Although no 300m fast fire culling rifle, or one for the amateur client, it has that ‘thing’. It is unusual and desirable and with the right sling fitted, an absolute joy to walk and stalk with, especially in closely confined woodland where it seems to slide silently past branches and leaves that can create a cacophony of noise. Opening and closing the action is definite, regardless of operation speed, with no need to slam it hard.

The butt’s underside has a matching sling loop and without a sound moderator, it sits on the shoulder with impeccable balance. There is more noise and recoil but let’s be honest, a moddy will destroy the looks. Like the visually similar concept, but the utterly different character of the Blaser K95, the short ‘actionless’ rifle brings its centre of gravity in towards the shooter for an indescribably compact feel. Yet this has to be offset by muzzle rise in .308, you will lose sight of the target and be slow to follow up. The Merkel, like the Blaser, reconnects your soul with that single-shot doctrine that reminds us of the simple delight that one well-placed shot can bring.

A unique and luxurious rifle that is far from a tool, but a delight in its own character that will appeal to some shooters where no other gun can fulfil the required purpose or desire. I would be interested to see the larger calibres available, as the relatively small .308 is very lively in such a slim chassis. I’d hope for them to show longer, heavier barrels, but the right scope or open sights will make a huge difference to improving head position.