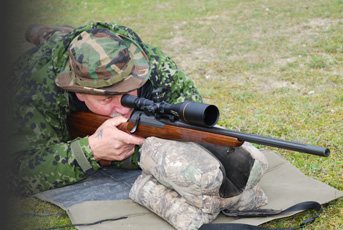 It’s funny how you get ideas about people’s products, for me as a firearms guy Merkel have always made high quality double rifles, drillings and also their bolt-action KR1. Though a little modern the KR1 has always said traditional German hunting rifle to me. So I was a little surprised when the importers Viking Arms sent me something that offered a heavy barrel, which indicates ability for more precision roles…

Looking through the books of other German companies shows that this idea is a not a new one as Blaser, Mauser and Sauer all offer a heavy, match/varmint-type tube. Some rifles even come with slightly more dedicated stocks too, with such items as heavier forends and even adjustable combs/cheek pieces.

Called the KR1 Contest in that respect this rifle is different as what you hang on to is near pure sporter, though the hog’s back butt is deeper and less pronounced. Likewise the forend is maybe a fraction fuller too, but there’s not a lot in it! The biggest give away is the 24.21”, heavy, .865” fluted tube replacing the light hunter barrel. No iron sights are fitted as they would be useless for its longer ranger role, but as always there’s a QD scope mount that attaches to the barrel.

The importers sent me a low, 1” mount, which immediately presented problems. You need a scope with a very low saddle, as the clearance between the base of the mount and the saddle is just 1.5mm. In the end I opted for my trusty old Leupold 3-9x50 VX-II with Mild-Dot reticule and M1 turrets; just the thing for a tack driver! Though I have to say that there was very little clearance for the objective and I had to remove the front lens cap… To be honest if the Contest is your thing then get some 30mm medium height rings to go with it!

For those of you not familiar with the KR1 I’ll go through the layout. Despite the rather Blaser R93-like looks the Merkel is a turn-bolt and not a straight pull. The bolt sits in a large, alloy shroud and engages directly with the chamber, so as such the rifle has no solid receiver; hence the scope positioning. They have retained the standard, butter knife style bolt lever, which though primarily a sporting style is easy to use, it just looks a bit at odds with the premise of the rifle.

At the rear of the action on the tang is a 2-position, sliding safety catch – pull back for SAFE and push forward to FIRE. This is a most practical layout and a lot faster to use than the de-cocker on the R93. When set to safe the action cannot be cycled, also the actual safety catch has an integral lock, which is released by thumb pressure as you operate it. Feed is by what I would term – a semi detachable magazine. Here the mag sits under a hinged floor plate/trigger guard (that includes the trigger mechanism) which has to be opened to remove the clip. That may seem a bit awkward, but the KR1 is not designed to be magazine-loaded as it fills from the top. The only reason they have adopted this rather odd system is to allow for calibre change, as the mag is replaced to suit the cartridge being used.

The barrel, like the R93 and Mauser M03 is retained by twin studs under the chamber, which are accessed by an Allan key by unlatching the floor plate. Once off replace it with the tube of choice along with the magazine and bolt head - if required. I say this as though a switch barrel system has much to offer, it’s also expensive, so for example pick your calibres so they can use the same bolt head and even magazine cartridge overall length (COL) which will save you some money. For example if you wanted an out and out varmint calibre along with a good, all-rounder deer cartridge then go for 22-250 Rem and 308 Win as both will show the same bolt head dimensions and compatible COLs.

There’s little doubt that heavy barrelled guns of this type are becoming more popular, but Merkel have been less than adventurous in calibre choice for the Contest. A look at their website shows it’s only offered in 222/223 Remington and 308 Winchester. So even though they have a good few, UK-orientated numbers like 243 Win, 6.5 Swede, 7mm-08, 270 etc they are not an option on this model. Which is a pity!

As I said the walnut stock is slightly fuller all round and more a medium/heavy sporter than a varmint. The comb is high and there’s no Bavarian cheek piece to get in the way. The pistol grip is quite large and angles back smoothly and the 14 ½” length of pull (LOP) makes for a natural, first pad trigger finger position. The forend marginally floats the barrel up to its re-enforce, but in truth is a bit slim and flexes all too easily. Only fixed sling swivels are fitted so you would have to drill the timber if you wanted to fit a QD stud for a bipod.

This is a nice rifle that appears to have some good shooting potential, but to be honest the stock design lets it down a little. Chambered in 308 Win the heavy, 24” fluted tube is going to be accurate no question. But it needs a heavier and more rigid forend so you can get a proper free-float job and more support up front if you want to shoot it off a bag or bipod.

Given the nature of the beast I elected for some Hornady TAP FPD, in 308 Winchester and you get the choice of a 155 or 168-grain A-MAX loads, which for this calibre and sort of use is hard to beat. The trigger offers a single set position and all you do once cocked is push the blade forward until it sets. However, I could feel no difference in weight between either position and in set mode the blade angles too much and I found myself pulling it down rather than back. Stick with the standard pull as that gives a light and crisp release of around two pounds.

Off a range bag with a field bag under the butt the Contest felt good. The high comb gave a good head/scope position and the LOP was ideal for me. Accuracy-wise the rifle shot both loads at around ½- ¾” at 100-yards, with the 168-grainers showing just a bit more consistency. I would pick those for longer range work, though both weights in the A-MAX format make good deer bullets too. As with all 308s recoil was a bit lumpy, though tamed a little by the heavy tube up front.

Despite the less than ideal stock (for a varminter/precision machine) the Merkel KR1 Contest is not a bad rifle given its role. However, it’s up against the likes of Ruger’s VT, Remingtons Varmint range and Howa’s 1500 Varmint Supreme series. Given the KR1’s price tag of £2750 and the fact you are going to have to buy the scope mount on top, all these come in under half of that if not less, plus all offer the required stock from the box and wider calibre choice.

However, the Merkel scores in one important area and that’s in its ability to switch barrels, which is a definite plus point. If I were to get the Contest then I’d get it in 223 Rem and add a 308 or similar, sporter tube. In this way you would have a better stock than the standard rifle and a system that would allow you to shoot any and all vermin and game in the UK.

We Reckon:
• Confused, heavy sporter or varminter?
• Small calibre choice
• Stock could be a little better