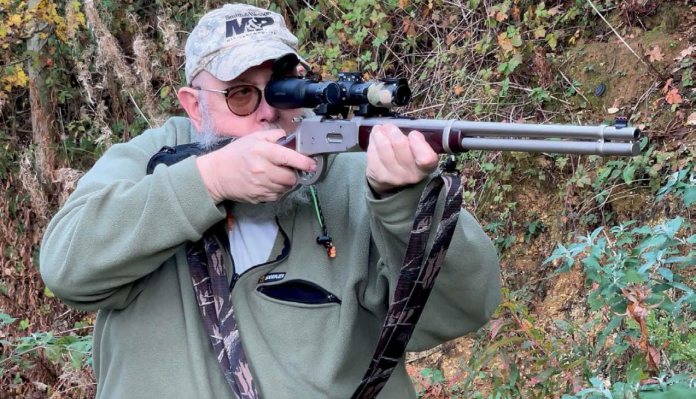 All things come to an end, or do they? There’s little doubt that the classic, tube-magazine, lever-action rifle has been an American favourite for well over 150-years. Although there are a number of makes, one name stands out; Winchester, and of all their products, it’s the Model 94 that is by far the most popular. So, when Mossberg, best known for its pumpaction and semi-auto shotguns, threw their hat in the ring, I was intrigued.

In this modern world of AR15s, semiauto pistols and carbines, the old 94-style guns and ethos might seem a bit of a non-starter! But in truth, it’s probably one of the most practical designs ever: fixed magazine, so nothing to lose, capable of being topped up at any time, reliable, manual action and with iron sights from the box.

Mossberg’s offering is called the 464 and is based on Winchester’s later, 94 Angle Eject (AE) model. Up until the late 1970s, all 94’s ejected straight up and back, so precluding mounting a scope over the receiver. Something that their biggest rival, Marlin, offered as standard, with their closed-topped Model 1894. Wisely, Mossberg incorporated their own version of this feature into the design from the off.

Mossberg has kept it simple on calibre, as you get just one, the venerable 30-30 WCF (Winchester Centre Fire), recognized as one of the earliest smokeless powder cartridges. Rifles are identical, with a round, 20” barrel, full-length mag tube (6 + 1 up the spout) pistol grip butt, iron sights, QD sling studs and a manual safety catch. The only choice you have is the finish, with three options: blued steel/walnut, frosted stainless/walnut and frosted stainless with grey/black laminate. All cost the same, are well-presented and show good wood-to-metal fit.

There is however a fourth model, the 464 SPX, which is a 16” carbine with synthetic, CAR15-type, telescopic butt and forend, plus it’s threaded for a cage-type brake or moderator. This fits in well with the American ethos of a survival-type or at-the-ready rifle. I don’t think the importers, Viking Arms are bringing this one in! As given it’s 30-30 only, you might have some issues with UK deer legal energy levels. The standard 464 is a handy little rifle, weighing 6.75 lbs and measuring 38.5” long. It looks and feels the business and my tester was the stainless/walnut option and did not disappoint.

Mossberg has gone to town on safety features, with a tang-mounted, hammer block catch, that pushes forward to FIRE and reverses for SAFE. This is backed up with a rebound hammer, that cannot connect with the tail of the firing pin unless the trigger is fully operated. A lever-actuated interlock, that unless fully up in the firing position, will block the trigger mechanism.

The action locks at the rear by a rising block, with the bolt showing a plungertype ejector in its face, which is superior to the Winchester 94AE under-slung blade system, which was prone to breakages. The receiver is open-topped, apart from the front and rear bridges, which are drilled and tapped for scope bases, with both Weaver and Warne offering mounting systems. The right side of the action is cut away to allow the fired case to eject sideways, below this is the familiar, Hall-type loading gate. Sights are from Williams, with Hi-Viz inserts. Up front is a tall, windage-adjustable blade with a red Day-Glo bar. At the rear a U-notch, flanked by green inserts. This one is adjustable for both windage and elevation. In use, these line up well and are easy to acquire in all lighting conditions. Usefully, Mossberg includes an extension bar that screws into the side of the hammer, so allowing easier manipulation with a scope fitted - nice one!

Given the calibre, in the UK the 464 is primarily a deer rifle for shorter-range work, from say 50 to 150/200 yards. In truth, if you don’t have a lot of land or hunt mainly in woodland, once understood it’s a sweet little cartridge and is capable of generating 1700 ft/lbs +, so large deer legal, given you understand its effective range. In the US and other countries, the 30-30 is often the preferred choice for both deer and feral pigs/hogs and has put a lot of meat on tables over the years!

To test accuracy, I needed a scope and Viking Arms kindly added a Leupold VX 6HD,1-6x24 compact, which suited the 464 ideally. To mount this, I got a set of Weaver 403 bases from Brownells UK at around £25, much cheaper than the Warne option, although the latter company offer a one-piece rail, which would be my choice.

The 30-30 is not the most prolific cartridge in the UK, but most manufacturers offer something. My thanks to RayTrade UK for some Remington 150-grain CoreLokt ammo, that along with a 170-grain option, are probably the two most popular weights. However, reloading is the alternative route and I would like to thank Henry Krank & Co, who supplied Lee dies, PPU brass, Sierra flat and roundnosed jacketed soft tips as well as Ramshot TAC and Wildboar powders. This old school, rimmed, bottlenecked case is easy enough to reload, but its long neck needs a bit of care when bullet seating, as it’s easy to misalign it. Also, the bullets must be crimped to stop them telescoping in the tube magazine under recoil.

One caveat of any tube magazine is the sort of bullet you use. Given the rounds stack tip to primer when loaded, you need to use a flat-nosed design to stop the possibility of recoil causing the tip to hit the primer and fire (chain fire). A large round-nosed type is equally effective at negating this, but on no account use a spire point (pointed tip) of any sort. It may never happen, but it’s best to stack the odds in your favour!

However, there is one exception from those clever guys at Hornady; the Lever Evolution, MonoFlex, which offers a pointed/tipped bullet, with the nose made of a flexible polymer that negates any possibility of a chain fire. Also, with a much higher ballistic coefficient (BC) than a flat/ round nose design, the range, accuracy and energy retention are improved.

Without a doubt, the best thing that ever happened to lever-action calibres, they also offer a 140-grain bullet for reloading, but sadly the importers are currently out of stock of both ammo and projectiles.

UK law states that in England and Wales, to hunt species larger than Muntjac or Chinese Water Deer; Roe upwards, requires a minimum muzzle energy of 1700 ft/lbs. With a sub-20” barrel, the 30-30 will not achieve this, so I was glad the 464 had a 20” tube. To hit this magic number, you will need a minimum of 2245 FPS. My reloads were doing around 2270 FPS|1738 ft/lbs, so good enough. The Remington ammo was doing 2320 FPS|1815 ft/lbs, so well within spec. However, chrono your ammo and bear in mind that velocity drop-off is quite rapid, so know your effective distances. I know a guy with a 20” Marlin 1894, scoped up he takes deer out to 200 yards, although admits to that being a long shot and always tries to get closer. But is still confident of his and the 30-30s abilities.

Accuracy-wise, I zeroed the 464 at 50 yards, meaning it only drops 1/4” at 100, 3” at 150 and 9” at 200, if you feel that bold, but it will do it! It was pulling an inch at 50 and around two at 100, so more than capable given the calibre. Recoil is acceptable, although I fitted a butt bag, mainly to give me a bit more cheek weld and head support. Reloads are fast, with no loss of your shooting position, which is great if you need a backup shot. Bear in mind that for best reliability, work the action hard and fast - do not baby it!

Filling the mag is easy, as you just slide the rounds into the gate and push them forward. A tip here; don’t fully push them in, as that keeps the gate open and makes things easier.

I really liked my time with the 464. OK, I’m a lever-action fan and own a few, but in 30-30 WCF it, as it always has been, is a great little, shorter range deer cartridge and rifle. I am tempted to get one for woodland stalking, as it would be such a pleasant change from the usual artillery I use. Oh yes, and at just £655 (any model) it’s a bargain. Currently, 30-30 is the only chambering, but if Mossberg were to offer it in pistol calibres, then that would be the icing on the cake and make this great little lever gun even more popular!