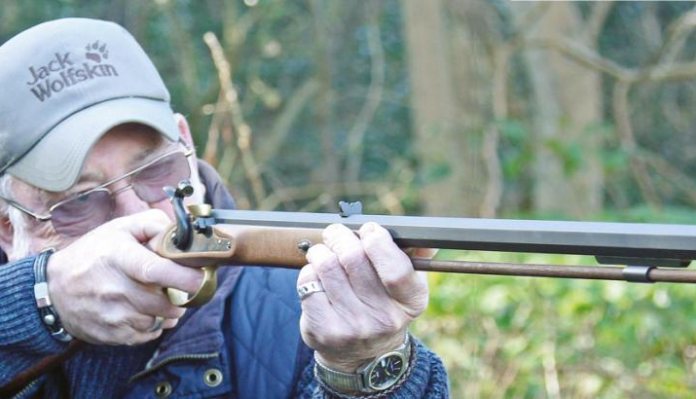 In part one, we looked briefly at the great variety of guns and accessories available to the prospective muzzle-loading rifle shooter and suggested that your final choice would possibly be determined by whether or not you favoured a particular period in history and, perhaps, your wallet. If you have looked long and hard at what is available and finally come to a decision, we can now move on to look at using the gun of your choice.

One of your first decisions will have been whether to use the ‘old fashioned’ black powder or go for one of the more recently introduced substitutes. If you chose black powder, then you first need the necessary paperwork and storage box in place, while the substitutes merely require you to have the cash. Black powder is the cheaper option, whether you choose Krank’s own brand or the Swiss variety (the choice of competition shooters) and will likely be your choice if you lean towards historical accuracy.

Black powder is graded according to the size and number of corns per gram, with the European system numbered from 1 to 5 (fine to coarse) and the Americans using 1Fg to 4Fg (coarse to fine), and best results will be gained by using the correct grade of powder for the firearm of choice. Categories of Swiss powder can be found at www.blackpowder. ch along with some loading information. The substitutes are more expensive and to me offer little for your extra cash (others will disagree) save for the cost of a storage box, which can be recouped fairly quickly if you shoot the gun enough. If you do choose the substitutes, it is important that you read the manufacturer’s instructions on the packaging with regard to the amount that is safe to use. At least one of the modern substitutes is touted as being easy to clean, but black powder residue can be dispersed with nothing more than boiling water. Also, bear in mind that there were no fancy cleaning solutions two hundred years ago. Just make sure that you get rid of every bit of fouling and that the barrel is completely dry and give it a wipe with an oiled patch before putting the gun away.

I feel that the majority of shooters new to this area will opt for a percussion rifle as their first choice, but no doubt the flintlock system will have its followers, so let’s take a quick look at the principle difference. While still quite basic, this earlier form of ignition requires a bit more attention than its successor. Not only are you putting a powder charge in the barrel, but you must also prime the container, called the pan; it sits on the side of the lock. Depending on your views, some find a finer powder is more efficient for ignition, which can be produced by grinding some of your standard powder.

A small brass tool is available to dispense the required amount of powder into the pan. Ignition is produced by a piece of flint in the hammer (cock) striking the cover of the pan, the frizzen, which as it moves down it, flips it open to expose the pan and, at the same time, produces a shower of sparks, with the result of setting off the priming charge whose energy is transferred through a hole in the side of the barrel to the main charge. Flints can be bought over the counter or, should you feel the urge, can be made yourself from pieces that you can find easily on the beach. The commercial flints will already be sized and shaped to fit the appropriately sized jaws of the hammer on your chosen gun. Cutting and shaping (knapping) from a large piece will not be as easy as it may sound, so buying a few over the counter will set you up while you practice making your own. Depending on the quality of the flints you buy and the amount of shooting you do, the use you get out of each flint will vary. Perhaps your first attempts at knapping will be trying to tidy up the edges of flints as they break up, giving you more shots for your money.

You will doubtless have heard of the long delay (dwell time) between the ignition of the priming charge in the pan and the main charge in the barrel. Like a lot of things, this is often exaggerated and you will get used to it in a very short time and get your follow through drills correct: in that you maintain your grip, firing position and sight picture until the ball has flown. You may occasionally encounter the priming charge igniting without the main one going off, resulting in a ‘flash in the pan’, but keeping the touch hole clear should help to eliminate this.

Percussion shooters have it a little easier, with a selection of caps readily available from your local gun shop. Small calibre guns usually will take the same caps that can be used on pistols with larger winged or ‘top hat’ models available for some of the heavier calibres. Whilst the use of the percussion cap is normally all that is required for consistent ignition, it is possible to buy a nipple priming tool which allows you to put a very small charge of fine powder inside the larger nipples before placing the cap on.

Muzzle loading long guns will be found in calibres ranging from .32” up to .75”, with those above .582 generally being restricted to flintlock only, with the smaller calibres available in both systems. Many of the larger calibres are offered as smoothbores, which may well appeal to re-enactors as they can be held on a Section 2 shotgun certificate. Round, pure lead balls are commercially available in all calibres, but bullets will give you a much more restricted choice. Your choice of projectile, bullet or round ball, will depend on the rifle you choose and how much shooting you intend to do. Round balls should be used with a patch wrapped in a cloth or paper outer, while the bullets, commercial or home grown, will have lubrication grooves, which you will need to fill with your choice of lube. There are tools available to make this job a bit easier.

Prices of lead projectiles have crept up significantly over the last couple of years and, if you are planning on using your gun a lot, then it may just be worthwhile investing in some casting equipment to make your own balls and/or bullets. Scrap lead can be obtained fairly easily and there is a wide selection of moulds on the market, with the resulting effort not only giving you more control over your projectiles, but a lot of satisfaction too. There are a number of forums on the internet where you can pick up all the information you need, if you choose this route but be aware of the hazards of working with molten lead. Get it right and it is very satisfying to see the fruits of your labour. Ignore the safety rules and you could end up with a serious injury. The Lyman Cast Bullet Handbook is a great asset in your shooting library.

It is probably safe to say that many ranges will no longer allow you to load your muzzle loading long gun from a powder flask, instead, will require you to have premeasured charges prepared. With some of the relatively large amounts of powder used in the bigger calibres, it is not unknown for one or two embers to be smouldering in the breech area for some seconds after firing. Should you attempt to reload in such a situation, then the powder you pour into the barrel will ignite and could cause you a nasty burn at least. There is also a very slim chance that the powder in the flask could also go up. That does not bear thinking about. With this in mind, it is prudent to blow down the barrel after each shot (yes, I know you’ve been told not to put any part of your anatomy in front of a muzzle!) and give it a few seconds before pouring the next charge. And while a well-trained, 19th Century infantryman could attain three shots per minute with his Enfield rifle, you are not in that much of a hurry; so, take your time and enjoy it safely.

Burning black powder has a nasty habit of leaving a corrosive residue in your barrel, the Swiss brand probably less so than the cheaper varieties. The immediate result of this is that your projectiles will become progressively harder to push home as the fouling builds up. Get into the habit of running a patch down the barrel every two or three shots to eliminate this. If you are shooting one of the new in-line rifles, then it is easy to pull a bore snake through. Should you take a break from shooting, then make sure that you wipe the barrel when you stop, as this fouling hardens when left. Again, swab out the barrel at the end of your session, until you get home to clean the gun thoroughly. The residue will get into even the tiniest of places and contains salts, which attract water. So, with that in mind, it is imperative that the gun is meticulously cleaned as soon as possible and given a light coat of oil on all metal parts inside and out before being stored. Thorough cleaning cannot be stressed enough if you do not want the dreaded rust to attack your gun. It is not advisable to store your guns in cloth bags or fleecelined gun slips, as they attract moisture.

This has been an all-too-brief look at the tribulations and pleasures of shooting a muzzle-loading rifle and it is to be hoped that the pleasure and satisfaction of getting it right will far outweigh the extra care and effort that is required. Next time you are on the line with one or more front-stuffing long gun shooters, go and have a chat. They are invariably willing to offer help and advice, which, as shooters of any discipline, we should all strive to do for the good of the sport in general.